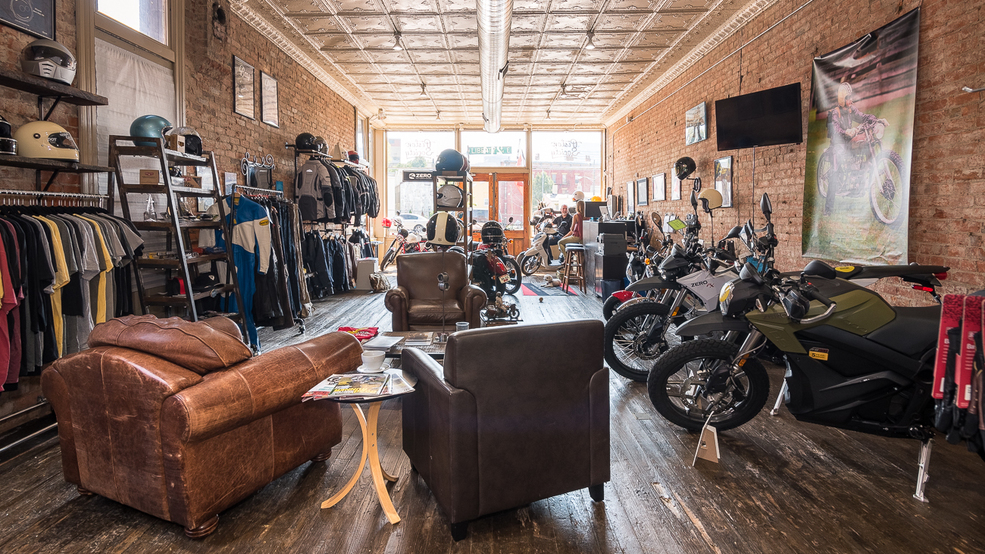 Piston Society is Downtown and OTR's spot for both vintage and modern motorcycles, mopeds, scooters, and fashionable apparel for the avid rider. It stocks brands of motorcycles not offered by other dealers in Cincinnati, such as Benelli, SSR Motorsports, and Zero Electric Motorcycles. ADDRESS: 214 E. Liberty Street (45202) / Image: Phil Armstrong, Cincinnati Refined // Published: 9.21.18
SEE MORE

As I push aside the wooden doors of Piston Society, an ecstatic yapping fills my ears as a tiny Maltese excitedly weaves her way between helmet displays and rows of two-wheeled vehicles to greet me. Her name is Siggy, the cheerful little shop dog.

After willingly paying the toll of two pats to the head and a scratch under Siggy's chin, I'm allowed passage into the rest of the shop. All of it slowly comes into focus; sandwiched between exposed brick walls, atop original wood floors, and beneath what looks to be an ornate tin ceiling are colorful products designed for motorcycle riders.

Cycles line the walls. Helmets are displayed on shelves. Racks of jackets and pants hang wherever there's space. A tiny lounge with three leather chairs separated by a literature-laden coffee table pack the back of the shop. Curated displays load the front windows, beckoning curious passersby to enter. Artwork hangs on the red brick walls. Natural light permeates every porous surface and bounces off the many metallic ones.

But it's Tim's interest in vintage bikes that informs the majority of the shop's inventory and aesthetic. As Downtown's purveyor of motorcycles and related gear, Piston Society focuses on a vintage, urban style instead of the powersport style. Riders can get gear and fashionable clothing to wear while riding the bikes they can't get elsewhere from the Liberty Street store.

Though he's from Cincinnati, Tim's interest in bikes started in the 1970s when he began riding a Harley Davidson 125 Scrambler on a farm near Athens, OH. He rode for years until he wrecked a friend's Kawasaki in his late teens and took a break from motorcycles entirely.

"I decided I would hang up motorcycles for a little while in my 20s," he recalls. "I knew the demographics for motorcyclists—you know, young men with a lot of testosterone tend to kill themselves—so I set it aside and focused on my girlfriend, my now wife, and my photography career."

But after some negging from a friend later in his 30s, he got back on the bike and began collecting broken Hondas to learn how to fix them. Years later, he's moved on from the Hondas to the BMW Airheads from his youth.

He always wanted a shop, though. After seeing specialty bike stores in NYC, Portland, Atlanta, and other major cities, he decided Cincinnati needed one, too. Harnessing the expertise he'd cultivated over the years fixing and collecting bikes, Piston Society roared to life on Race Street in 2015.

As for the name, Tim explains it's a reference to our culture relying heavily on motorized vehicles. "We're all born into the Piston Society—our society is run on motors—so we're all motor heads by default."

Motor heads can learn more about Piston Society by visiting its website.