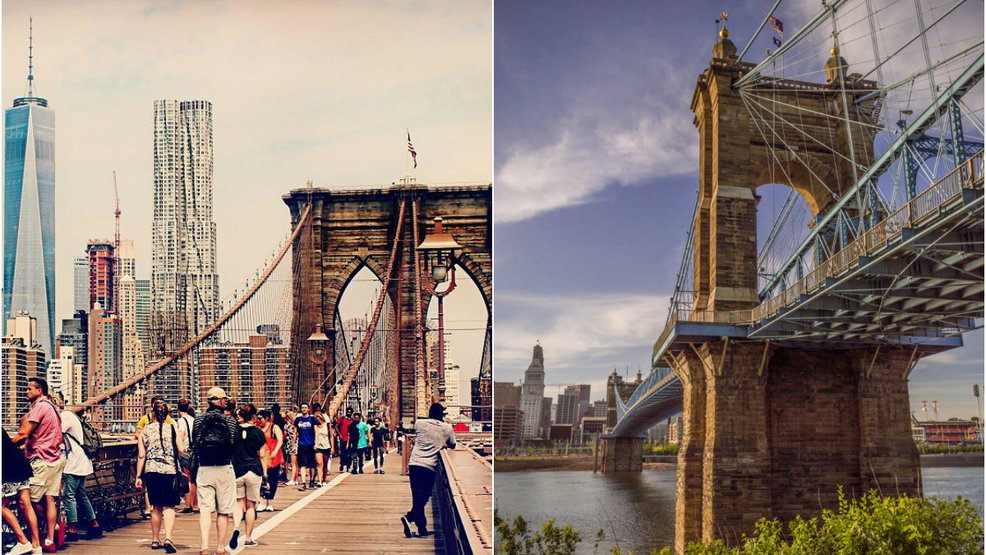 NYC&rsquo;s Brooklyn Bridge And Our Roebling Bridge Were Designed By The Same Architect

It’s time to put a longstanding chicken-or-the-egg scenario to rest.

Of course I’m referring to the respective origins of the John A. Roebling Bridge and the Brooklyn Bridge. The most popular misconception is that the Roebling was created as some kind of miniature tribute to its larger, more easterly counterpart. Today I’m here to tell you, “Congratulations Cincinnati! You were here first.”

The commonality lies with their creator, the titular John A. Roebling. The John A. Roebling Suspension Bridge – connecting downtown Covington to the riverfront of Cincinnati – was first opened to pedestrians on December 1st, 1866, then to horse and buggy exactly one month later. At the time of its opening, the Roebling Bridge (then known as the Cincinnati-Covington Bridge) became the world’s longest suspension bridge (1,057 feet).

Defined by their iconic stone towers and suspension cables, the thing that makes both the Roebling and Brooklyn bridges so spectacular are their footpaths. Residents of both Cincinnati and Covington cross the Ohio River by foot every day, primarily to attend Reds or Bengals games or concerts. My first time across the bridge (departing Cincinnati) was out of sheer curiosity, and it resulted in a series of spectacular Instagram shots and a well-deserved pint at The Gruff, located at the end of the footpath in Covington.

On any given day – bad weather be damned – the Brooklyn Bridge is bustling with joggers and cyclists. But most of the time, you’ll see people who just want to experience the iconic pathway, set against the backdrop of the Big Apple. As someone who has taken those steps, you’re better off starting on the Brooklyn side. From there, you can see the Statue of Liberty (though not the best view), the Empire State Building, and the Freedom Tower, which looms over the Bridge. Finishing on Canal Street, you will find yourself on the border of Little Italy and Chinatown – two of Manhattan’s most bustling neighborhoods.

It should be noted – among other similarities – that both bridges were declared National Historic Landmarks (the Brooklyn in 1964, the Roebling in 1975).

Don't forget to scroll back to the top to peruse the photo gallery, featuring both iconic bridges.