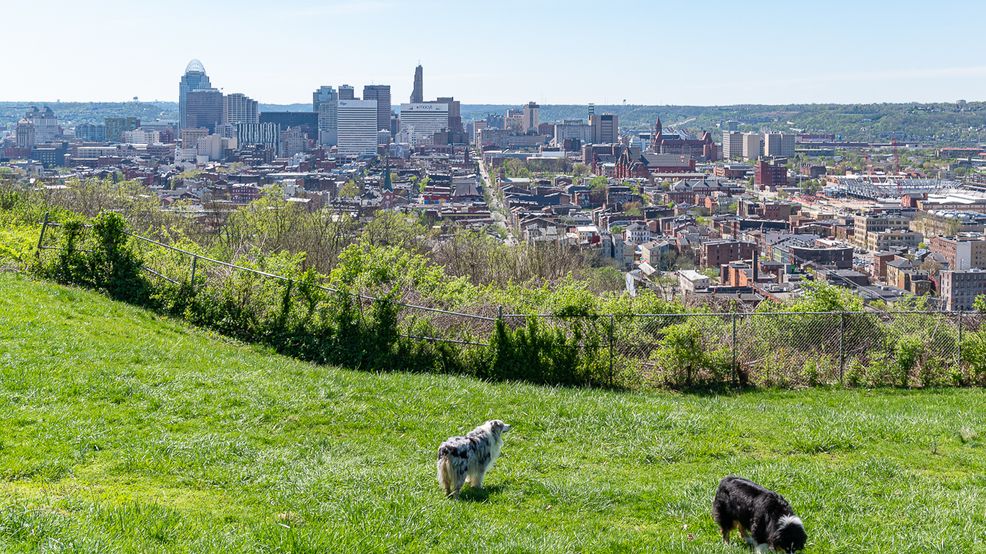 View #4: Bellevue Hill Park (CUF) / Bellevue Park in CUF has a phenomenal view of Cincinnati from the north. The best reason to seek out this particular perspective over the others is because of the unique perspective it has on the density of Over-the-Rhine. / Image: Phil Armstrong // Published: 4.24.20
SEE MORE

They don't call us the City of Seven Hills for nothing. While there's some debate about which seven hills contributed to the nickname, there's little doubt our city's hilly geography lends itself well to long-distance viewing of the city's center. On clear days, you can go to any number of public parks and overlooks to enjoy the view.

So that got me thinking: is there a single "best" angle on the Queen City from one of those hills that's open to the public? One that screams "CINCINNATI" more than others? One that, if placed on a postcard, would out-sell the others because it's just the right angle?

Let's take a quick look at each to determine each of their strengths.

You'll often hear proud Bluegrass State folks say "the best view of Cincinnati is from Kentucky." When standing at the Devou Park overlook in Covington, you begin to understand why. Downtown Cincinnati and its surrounding neighborhoods are visible from this nice southwest angle. From the iconic CINCINNATI sign on the Duke Energy Convention Center Downtown to the Cathedral Basilica of the Assumption in Covington, Devou Park offers a truly panoramic view of two states joined by a river.

The Eden Park Standpipe, Hughes High School, the Roebling Bridge, City Hall, Mutter Gottes Church, Christ Hospital, and thousands of houses can be seen from this one spot. Sunsets are especially great from this angle because the sun sets at your back as it illuminates Downtown.

Mt. Adams offers a fantastic close-up of the east side of Downtown. Several streets dead end with a view of the city, and there's a parking lot with a clear view next to the old Rookwood Pottery building on Celestial Street that features a great view of the Big Mac Bridge. Mt. Adams' view is notable because it has an excellent line of sight on the river and northern Kentucky. If you walk across the Ida Street bridge, you get a glimpse of Pendleton, Over-the-Rhine, and Mt. Auburn, too.

Mt. Adams has several tiers of streets and clearings that make for great photos. While sunrises are good because the sun is at your back, there's something truly magical about seeing the sun retreat into the horizon with thousands of buildings glittering in the foreground.

On the total opposite side of the city from Mt. Adams is Olden View Park in East Price Hill. This is a view you've definitely seen before, and for good reason. It's easy to get to, offers a tremendously good view of Downtown, and provides an unobstructed look at the West End and Over-the-Rhine, as well as a view of the hills north and east of Downtown. The park is wedged between Queens Tower (living community) and Incline Public House (restaurant) and looks straight up 8th Street all the way into the city.

The CINCINNATI sign on the Duke Energy Convention Center Downtown immediately catches your eye when you're there. As you scan everything from northern Kentucky to CUF, you'll see notable landmarks like the Ohio River, Downtown's tallest skyscrapers, the Art Museum, the back of Union Terminal and its rail yard, and everything in between. For photographers who like shooting cityscapes, the park is an especially excellent place to get a photo of the city at night. (Bonus: the moon can be photographed low on the horizon near the center of the city as it first comes up during certain times of the year.)

Bellevue Park in CUF has a phenomenal view of Cincinnati from the north. The best reason to seek out this particular perspective over the others is because of the unique perspective it has on the density of Over-the-Rhine. The low rooflines of OTR do well to not obstruct any part of the view as they carry on for several blocks before dissolving into Downtown and ramping up the sudden wall of high-rises and skyscrapers. Looking south allows for great photo opportunities no matter the time of day.

The park has a great view of Union Terminal's face, as well as interesting angles on both Music Hall and City Hall. Fairview Park to the west has a similar view to Bellevue Hill Park, but Bellevue Hill sits at a higher elevation.

East Price Hill makes the list twice simply because it has two tremendously good views of Downtown that are different enough from one another to be notable. You can still see nearly everything in the Olden View Park perspective, but instead of seeing straight up 8th Street, you get the winding path of the river. What you lose in the texture of trainyards and traffic at Olden View, you gain in riverboats and barges at Mt. Echo. This angle is also interesting because you get a little bit of Ludlow, KY when you're focused on Downtown. The close juxtaposition of city skyscrapers and two- and three-story homes makes for a nice composition.

There've been photographers who've captured this angle at sunrise and sunset, and each time of day looks great. You really can't go wrong from this angle.

It's hard to pick just the single "best" angle. Each view offers something unique you can't get at the other locations. If you want to see Over-the-Rhine, go to Bellevue Park. If you want to see Pendleton, go to Mt. Adams. If you want a little bit of Covington in the mix, you need to go to Devou. It truly depends on what you're interested in seeing and at what time of day.

But, if I had to pick one overall view accessible by the public, I'd go with Mt. Echo Park. (Cue confetti/streamers)

It has the river, it has that iconic CINCINNATI sign, you can see nearly all of Downtown, you have a great rail bridge, Mt. Adams looms behind it, and Mt. Echo Park has a similar view of Downtown as Devou Park. In other words, without actually being in Kentucky, it still manages to wrangle some of the magic from that angle.

So, what do YOU think? Agree? Disagree? Vote in the poll below!