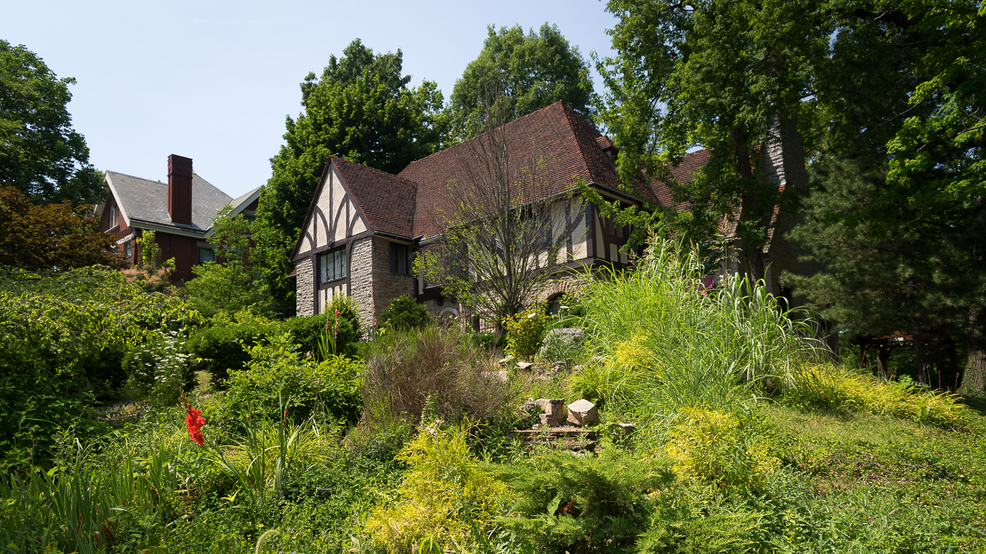 As I climbed the steep steps to Bella Notte and approached its iron gates, excitement washed over me. Something about the house—a massive 1920s Tudor mansion—felt different than the other homes I've visited. It had a tantalizing air of mystique swirling about it. I needed to know more.

I already knew it was operating partially as an Airbnb. I knew the owner lived in the house and that he had a history in the film industry. I knew his breakfast was highly regarded.

What I didn't know, though, was that I was about to meet a professional jack-of-all-trades waiting inside.

Michael Caporale is that professional. His resume is extensive: film director, cinematographer, writer, editor, producer, painter, collector, host, musician, cook, author, photographer...the list goes on. He's a creator in the truest sense of the word. The aforementioned house, Bella Notte, is his treasure-filled castle with a lowered drawbridge and no moat. Travelers from all over the world visit his house to rest their heads, dine at his breakfast table, and experience what it's like to stay Cincinnati in a distinctive way.

THE KING & HIS CASTLE

A man accustomed to the art of presentation, Michael manufactured Bella Notte to not only serve as a certified bed & breakfast but also as a veritable museum of sorts. Every wall, corner, and surface of the house is decorated with objects he's collected. The collection ranges from photos of various historical events to portraits of cultural figures to artifacts of the music industry.

Michael's careful curation of each piece echoes a specific message to his guests: celebrating different cultures is both welcome and encouraged at Bella Notte.

And cultured he is. After spending his youth traveling from state to state, he settled in Cincinnati in the late 1970s. He purchased and moved to North Avondale's Bella Notte seven years ago, eventually opening it up to Airbnb over the last three years. Since then, he's become a "Superhost" on the site, garnering hundreds of five-star reviews.

Skimming visitors' reviews, there's no shortage of compliments for Michael and his house. He's clearly earned his reputation.

On the second floor, the Southwest Room, with its potted cactus and Mojave-color scheme, reflects the theme for which it's named. A second room just down the hall is styled with Scottish odds and ends, with specific homage to Robert the Bruce (who ruled Scotland in the early 1300s). Michael says he discovered the historic king was his grandfather 27 generations back.

On the third floor, a British Invasion-themed room directly inspired by Michael's passion for 1960s and '70s music is available for rent. The adjoining room, however, is the show-stopper. There you'll find an impressive panoply of guitars, vintage drum kits, and various other music accessories on display. Music-lovers, especially fans of The Beatles, will find it especially awe-inspiring.

But even if staying in a 1920s North Avondale Tudor Mansion inside an eclectic room while enjoying the hospitality of a talented filmmaker who can seemingly do everything doesn't quite seal the deal, perhaps his legendary breakfast will.

His cooking is reportedly so good, he had to author his own cookbook to sell to inquiring guests. At Michael's table, a guest may enjoy any number of exotic frittatas, crepes, and cakes (among other dishes). Thoughtful conversation and humor are a regular part of a balanced breakfast at Bella Notte, too. He feeds both the stomach and soul.

Leaving is the only downside to Bella Notte. As Michael saw me out after hours of conversation about his life and the house, I felt confident I'd learned everything I needed. My prior excitement was vindicated, my curiosity sated. Michael's house, without question, isn't an Airbnb experience you can get anywhere else in Cincinnati. It's something special.

The house isn't just a place to stay for a night. Bella Notte is an integral part of your Queen City excursion and a truly unique experience you'll be talking and writing about for years to come.

To book Bella Notte, visit its listing on Airbnb.