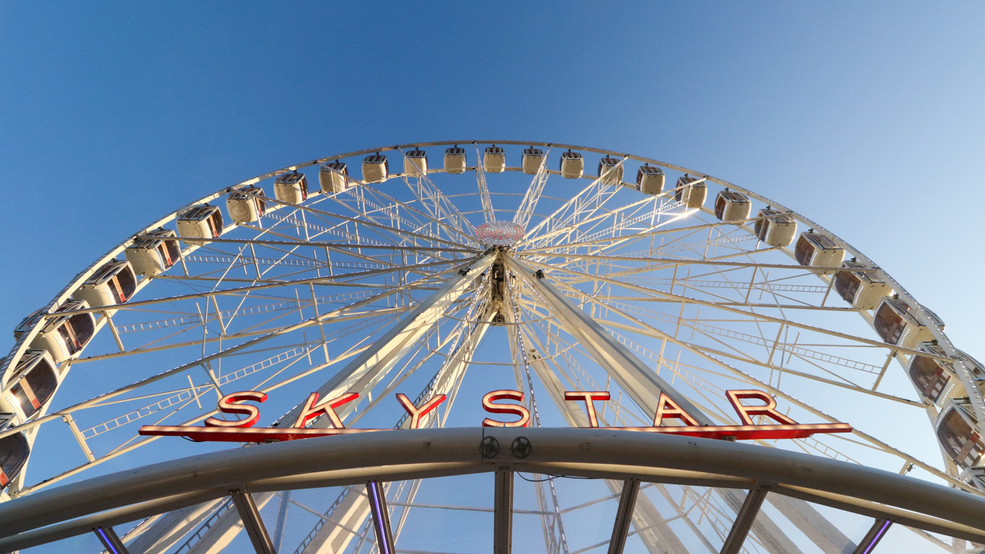 Cincy's Beloved Traveling Ferris Wheel "Might Not Ever Leave"

Since arriving at The Banks to celebrate the development’s 10th anniversary, the SkyStar observation wheel has earned the attention of visitors (and their cameras). The 150-foot-tall attraction is the largest of its kind—a traveling ferris wheel that has also made stops in Louisville, Kentucky and Norfolk, Virginia. Originally slated to run from August to December 2018, SkyStar’s presence on the Downtown Cincinnati riverfront was recently extended until at least mid-June 2019, and there’s speculation that it could stay even longer.

36 fully accessible, climate-controlled gondolas offer riders a dynamic view of Downtown Cincinnati, the Roebling Suspension Bridge, and the two shores of the Ohio River. It’s not just the sights seen from the air, though, that are giving the wheel notoriety—it’s the presence added to the city’s skyline as well. Illuminated with over 1,000,000 LED lights, the wheel’s light show has become an eye-catching presence in front of the city’s iconic collection of skyscrapers and buildings.

Each day, a team of employees keeps the wheel turning. Jason Bohrer, the SkyStar’s General Manager, gave us a tour of what goes on behind the scenes. He supervises the wheel’s operation and begins each day by climbing 75-foot ladders to perform routine inspections. After looking over the drive motors and control panels, Jason and his crew welcome their first guests. As night falls, the lights shine brighter and brighter.

The SkyStar has gained attention sitting between The Banks and Smale Riverfront Park. The attraction follows the example of several other cities, from Atlanta to Seattle to London, that have installed similar observation wheels enjoyed by both tourists and locals alike. Having become a hit with Cincinnatians, and now scheduled to stick around for a bit longer, the wheel is yet another entertainment option to be found Downtown during the holidays. It’ll be shining bright through Christmas and the New Year while remaining for Opening Day when the Reds return.

Several other cultural festivals and events will occur in the coming months as well. Even if an event isn’t driving people to the riverfront, the wheel certainly does.

When asked if SkyStar and its local advocates might be looking to extend the wheel’s visit even further (or could be considering making it a permanent fixture), SkyStar Managing Partner Todd Schneider says, “We love Cincinnati, we might not ever leave.”