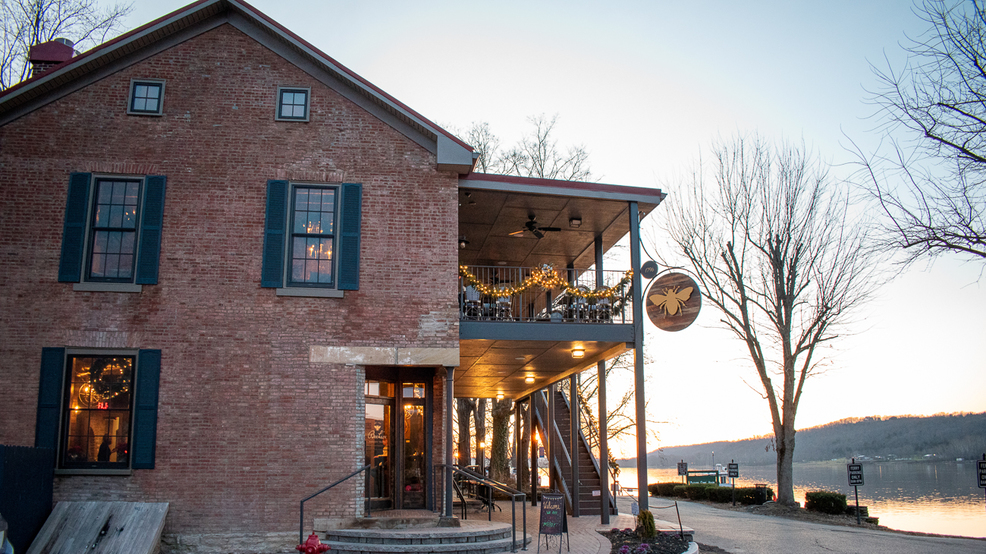 Beehive Augusta Tavern, which sits along the banks of the Ohio River, is a rustic and tastefully decorated restaurant serving classic American fare and its own signature dishes. The building itself dates back to 1796, giving it a particularly historical feel while dining. The Beehive is now under the ownership of Lance and Lalani Bates; they remodeled and reopened Beehive in early 2019 after it was closed for several years. ADDRESS: 101 West Riverside Drive, Augusta, KY (41002) / Image: Matt Groves // Published: 2.23.20
SEE MORE

It’s a rainy Saturday night in historic Augusta, Kentucky. The Ohio River town of roughly a thousand people is quiet. In fact, the only “buzz” is coming from the tavern on the corner of Main Street and Riverside Drive. You make your way inside. Taking your seat, you’re greeted by a warm smile, a long list of bourbon, and Nick Clooney singing the Ruth Lyons’ version of “Happy Birthday” to a guest at the table next to you.

Yes, the Clooney of Cincinnati’s local news glory days. Such a spectacle would be out of the ordinary in any other social setting. Not in Augusta, though. And certainly not at the renovated and rejuvenated Beehive Augusta Tavern.

The story of the Beehive Tavern begins during the not-so-recent post-Revolutionary War era. Around 1796, to be precise. A veteran constructed the original building that's still in use today, which served as a residence, pharmacy, and mercantile over the years.

A historical marker outside of the Beehive says the building was a place where many local militia members were brought when mortally wounded during the war, around 1862. Many don’t realize a small battle took place there; the Battle of Augusta brought townspeople from their homes to fight hand-to-hand to keep Confederate soldiers from crossing the Ohio. During that fight, the building was set on fire.

After weathering the war, the building’s biggest challenge became rising floodwaters. As the decades passed, it struggled to remain. Fortunately, the 1970s brought together a compassionate group of Augusta residents who prevented its demolition. Then, in the '80s, the Beehive Augusta Tavern became a staple of fine dining and drinking around the region. Notwithstanding having a different tenant and spending several years vacant, the Beehive has reclaimed its spot in the limelight of the Northern Kentucky food and beverage scene.

Boasting a menu comprised of old favorite dishes that are chock-full of locally sourced meat and produce, the Beehive is now under the ownership of Lance and Lalani Bates, whose ties to the region are strong.

Once you’re seated in the rustic and eclectically designed bar or dining room, a menu full of signature and classic cocktails, draft beer, and a choice list of bourbons will warm you up to the cozy setting illuminated by hive-shaped lights over a beautiful bar.

With your cocktail in hand, you might find a comfortable spot in the formal dining area with exposed beams overhead, a view of the river outside, and a hearty meal in front of you. If steak is your thing, give the ribeye a shot. Hailing from the Lunsford Cattle Company, this 14-oz cut of beef is accompanied by a medley of potatoes and other vegetables. If red meat isn’t your thing, be sure to try the salmon dish with grilled herb butter and wild rice. You truly can’t go wrong.

Be sure to save room for the esteemed Honey Pie for dessert. But don’t ask for the recipe—it’s top secret!

If you’re worried about the drive to Augusta, don’t! With multiple ways to get there from Cincinnati, you won’t be driving more than an hour on anything but scenic roadways. If you’re feeling adventurous, head east on State Highway 52 to the Augusta Ferry landing, which conveniently delivers you to the front steps of none other than the Beehive Tavern itself.

Discover more about the Beehive Tavern online and visit its Facebook page.