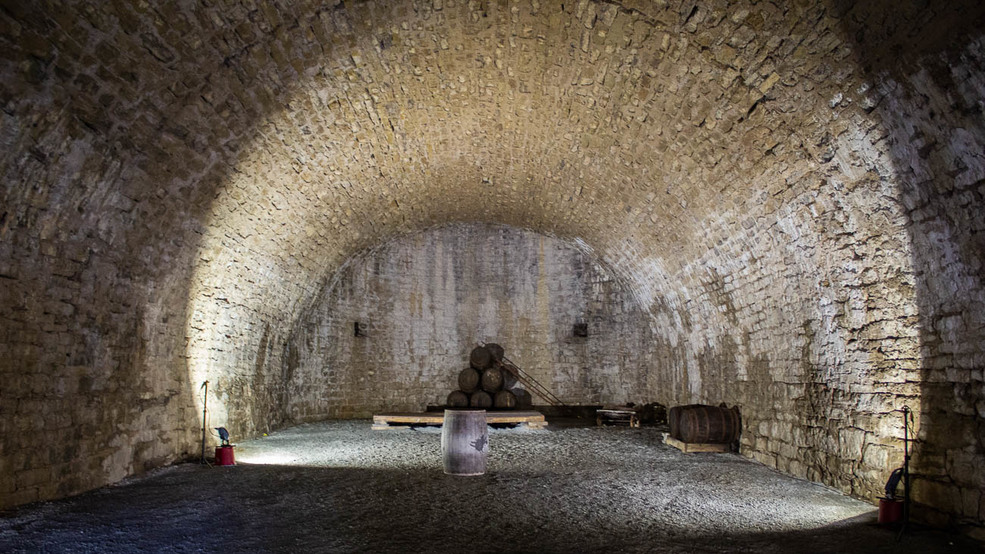 One of the best features of Baker-Bird is their iconic wine cellar. It's the oldest and largest wine cellar in America, and it's open to the public to rent for private events like weddings and concerts. The acoustics are amazing in the 40-feet-high and 90-feet-deep stone cellar. They still store some wine barrels in the space, too, but not quite the +5,000 barrels they did in the winery’s past. ADDRESS: 4465 Augusta Chatham Road, Augusta, KY (41002) / Image: Katie Robinson, Cincinnati Refined // Published: 2.19.19
SEE MORE

The Oldest Commercial Winery in America Is an Hour From Cincy

Baker-Bird Winery, the oldest commercial winery in America, brings both historic and European flair to Kentucky’s wine scene with a vineyard that was founded by a German family in the mid-1800s.

Its name reflects a traditional German business naming scheme: a combination of the original owner’s and current owner’s names. Dinah Bird has owned the winery since 2002 and gives amazing tours of the property (from personal experience). To learn about John Baker, the original owner and first part of the namesake, you’d have to go back over 160 years.

The winery was settled in Augusta, Kentucky to attract the multitudes of Germans who flocked to the area across the Ohio River. Nicholas Longworth was the famous pioneer who introduced commercial semi-sweet wine-making techniques to Cincinnati. 3,000 acres of grape vines covered the land between Cincinnati and Ripley in the early 1800s, making this area the country’s leading wine producer by 1859.

Baker-Bird's land was originally purchased in the early 1800s by a German named Abraham Baker, whose father, John Baker, was one of the first property owners in Augusta. Abraham’s son Abraham Baker Jr. later took over the land and turned it into a vineyard, producing premium wines on the fertile property.

A convenient ferry would bring Ohioans from Higginsport, Ohio in Brown County to Augusta’s shore, dropping winos off just a mile from Baker-Bird’s site. A ferry still operates in the same spot today—weather and river levels permitting. Otherwise, the drive to the winery is about 50 minutes from Cincinnati.

The winery has made huge strides in wine-making and preserving its history. While it doesn’t grow any grapes on the site anymore, Dinah gets first pick at multiple vineyards around Kentucky because she helps tend to them. It's still home, however, to the oldest and largest wine cellar in America—one that you can not only tour, but rent out for private events like weddings and concerts. (The acoustics in a 40-foot by 90-foot stone cellar are amazing to say the least.) They still store some wine barrels in the space, too, but not quite the +5,000 barrels they've had in the winery’s past.

The building and land are listed on the National Register of Historic Places, which is extra special for an American winery; out of over 8,000 wineries in the country, only 22 have the national historic status. Today, they produce all sorts of wines, including one they were the first to distribute commercially known as their Black Barrel Wine. They partner with Woodford Reserve Distillery to make the wine in bourbon barrels. It takes over 10 years to produce, but it’s worth the wait to taste the warm bourbon sensation on your tongue with each sip (otherwise known as a “Kentucky hug”).

Baker-Bird's expertise earned its accolades throughout its long history. Its wines have won over 150 medals in international and national competitions. You can find Baker-Bird wines around the Tri-state, too, in a handful of liquor stores, as well as at Japp’s Bar in OTR.

Today, the winery offers tours of the property with wine and premium cheese tastings when the winery is open on weekends from 1-5 PM.

Not many people can say they’ve visited a winery that survived a Civil War battle (did I not mention that before?!), but if you’re willing to take a scenic drive less than an hour from here, you can scratch that off your bucket list and enjoy some rare crafted wine all at once.