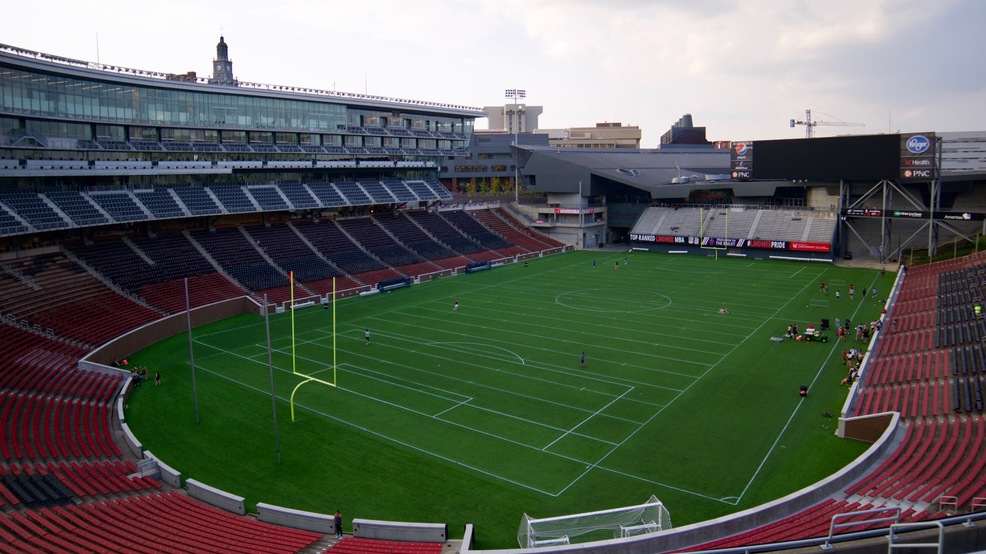 2. IT WAS BUILT ON A LAGOON: The original 1895 plans called for an athletic field to be built in Burnet Woods because the land where Nippert now sits was a lagoon. Ultimately, the lagoon was filled in and built anyway due to the location's popularity with the students. / Image: Brian Planalp // Published: 10.21.17<p></p>
SEE MORE

9 Cool Facts About Nippert Stadium That You Might Not Know

We all know Nippert is Cincinnati's most beautiful stadium. But did you know...

Completed in 1924, the stadium is the sixth oldest stadium in college football, behind only those of Harvard, Georgia Tech, Princeton, Yale, and Cornell.

2. IT WAS BUILT ON A LAGOON

The original 1895 plans called for an athletic field to be built in Burnet Woods because the land where Nippert now sits was a lagoon. But ultimately, the Nippert site was favored because it was so popular among students, who played Capture the Flag there. The lagoon was drained and filled with excavated soil from previous construction jobs around campus. In time, the athletic field settled into the moist soil, which gives the stadium its present-day appearance of being nestled into the ground.

3. THE TALE OF ITS NAMESAKE IS NOT A HAPPY ONE

Jimmy Nippert, whose father was a prominent judge (Alfred Nippert) and whose mother was the heiress to Proctor & Gamble (Maud Gamble), was born at Christ Hospital in 1900. Nippert followed his father’s footsteps into the military, then law school at UC. In 1923, he started for the Bearcat football team against the Miami Redhawks, where he suffered a puncture wound. He died just three weeks later of blood poisoning, at Christ Hospital.

UC’s administration initially discussed dropping the football program in response to Nippert’s death, but his father pleaded them not to. Subsequently, James Gamble, Nippert’s grandfather, gave $250,000 to the university to complete the construction of a football stadium, on the condition that it be named James Gamble Nippert Memorial Stadium.

4. ITS FIELD HAS A NAME ALL ITS OWN

Nippert may be on the masthead, but it’s Carson Field. Arch Carson was captain and principal organizer of UC’s inaugural 1885 football team. Later, as physical director of the university, Carson shepherded the construction of the athletic field that would later bear his name. He even had the honor of acting as the referee during its first official game in 1901.

The stadium that would become Nippert was built around Carson Field as a necessity. The original pine benches that surrounded the field were apparently quite painful. So painful that spectators chose to stand around the brim rather than sitting on them, leaving one reporter to remark that during games there were more fans outside the stadium than in it. In 1916, funds were raised to replace the benches with concrete. Progress proceeded haltingly until Nippert Stadium was completed and christened in 1924, thanks to James Gamble.

5. IT'S HOME TO THE BEARCATS, WHO ARE NOT NAMED AFTER AN ANIMAL

When the UC football team beat Kentucky 14-7 in 1914, they did so with the help of star fullback Leonard “Teddy” Baehr. During the game, the cheerleaders chanted, “They may be the Wildcats, but we have a Baehr-cat on our side!” After the student newspaper took it up, the following mock-epic poem appeared in the 1915 student yearbook: “At last outplayed, out-tricked; Outrun, outpaced, outkicked; Bearcat had Wildcat licked; Fourteen to seven.” And that’s how Nippert Stadium’s host team won its name.

6. IT WAS HOME TO THE FIRST NIGHT FOOTBALL GAME IN THE U.S.

Lights were put up around Carson Field in 1909 because a large number of the players were co-op students, meaning they could practice only at night. In 1923, those lights were put to good use, in what would be the first football game to be played at night in the entire country. Cincinnati defeated Kentucky Wesleyan 17-0.

7. IT'S BEEN EXPANDED FOUR TIMES AND CONTRACTED ONCE

Nippert Stadium had a capacity of 12,000 when it first opened. Its most significant expansion came in 1936, during which the Depression-era WPA further cleared the terrain and expanded the stadium capacity to 24,000. Nippert expanded again in 1954, 1990, and 2014 to reach 40,000 seats. However in 2016 the stadium was contracted by 1,200 seats in order to accommodate FC Cincinnati’s soccer pitch.

8. IT'S HOSTED FOUR TEAMS BESIDES THE BEARCATS

The Bearcats have played at Nippert Stadium since it was completed in 1924. In that time, the stadium has also played host to four other teams: The AFL expansion Cincinnati Bengals (1968-69), the Cincinnati Comets (1973), Moeller High School (2006-08), and FC Cincinnati (2015-present).

9. IT ONCE DOUBLED AS A CONCERT VENUE