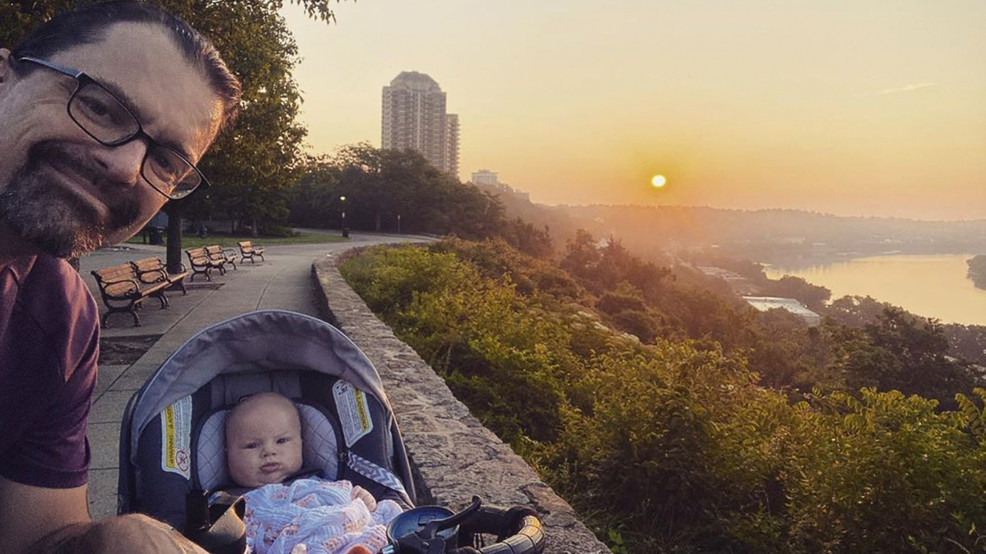 "It was all very slow and organic," he says. Mike began taking the stairs in his building instead of the elevator. He stopped getting his everyday meals at Parkside Cafe and Frisch's. As a result, he shed 15 pounds rather quickly and was pleased with the progress he was seeing. / Image courtesy of Mike Moroski // Published: 8.9.20<p></p>
SEE MORE

On February 27th of this year, James Moroski was born. He lives with his parents, Katie and Mike, on the 8th floor of a residential building on 4th Street downtown. While his life is currently full of bottles, long naps, and other adorable baby activities, there's one thing little James recently accomplished that likely no other Cincinnatian at his age has achieved before: James has visited all 52 Cincinnati neighborhoods on foot before turning six months old.

Okay, technically, he's visited all 52 Cincinnati neighborhoods by stroller before he turned six months old, but his father, Mike Moroski, did all the walking and pushing. Since April 5th—one month into little James' life—Mike and his infant son have walked Cincinnati and Northern Kentucky every day, achieving impressive milestones together.

STEPPING OFF ON THE RIGHT FOOT

Their journey began in December 2019—two months before James was born. Mike, an elected representative of the Cincinnati Public Schools Board of Education and the Policy & Partnership Manager at Cradle Cincinnati, had elbow surgery and wasn't thrilled with the weight he'd gained. To get fit, he altered his diet in small ways while also making an effort to move more.

"It was all very slow and organic," he says. Mike began taking the stairs in his building instead of the elevator. He stopped getting his everyday meals at Parkside Cafe and Frisch's. As a result, he shed 15 pounds rather quickly and was pleased with the progress he was seeing.

Fast forward to the end of February, and James entered the world. Now a dad with a whole new list of responsibilities, Mike knew he had to keep up the forward momentum if he wanted to keep the weight at bay. On a crisp April morning, he told Katie that he would walk across the Purple People Bridge with James in the stroller. Bundled up, the duo set out at the dawning light in the Ohio River Valley.

"I had no tracker, and I didn't know what I was doing. None of this was planned, and I'm wearing just my crappy shoes," Mike recalls.

That trip, having gone well, inspired him to do it over and over again. Mike was moving, hanging out with his son, and seeing the city. As a result, their daily routes grew longer and more ambitious. Katie purchased him proper shoes, and he downloaded the Nike Tracker app to take their morning adventures up a notch.

Over the ensuing months, their walks eventually led them up Price Hill, over to Mt. Washington, into Avondale, through North and South Fairmount, and beyond. Every trip they made, Mike and James left from their doorstep on 4th Street and walked the entire way, never once touching a steering wheel. The two would wake up before 6 AM, head out for about two hours every morning, and do a longer walk on Saturdays. This afforded Katie the chance to sleep in and got Mike out of the house to keep up with his fitness goals.

For Mike, this daily routine isn't about the total miles he's walked. Mindfulness is the core of it all for him. He centers himself on those long trips and quiets his mind. Instead of being in work mode like he usually is, he spends that time entirely in the moment, talking to James, and listening to music.

That said, he is often aware of how far he walks per day. On a trip to Price Hill, he realized he could walk the equivalent of a half-marathon if he turned around and headed home after reaching the Crow's Nest. Mike now jovially refers to that walk as the Flying James Half Marathon. After realizing he could walk that far with relative ease, he slowly worked his way up to walking a full marathon with James.

James, by the way, is totally cool with all of it. Mike says he gives him his bottle, he drinks it in about 20 minutes, and "religiously falls asleep at mile three."

Along the way, Mike's discovered several areas of Cincinnati are hillier than others. Mt. Adams, according to him, doesn't compare to Price Hill, and Sutter Avenue in North Fairmount proved to be a formidable challenge for them.

"At the last quarter of it, I had my mouth open, pushing James, and I didn't know if I was drooling, crying, or sweating," he jokingly admits.

But what's the 'baddest' hill of them all? Center Hill Avenue in College Hill. Or, at least, that's the one that gave him the biggest run for his money so far.

By mid-July, Mike and James were walking to Sayler Park from Downtown and back, which equates to a full marathon roundtrip. After that, the two hit up the last few neighborhoods they hadn't yet visited to round out the list of 52. Together, they achieved a unique feat likely no other father and son have before in this city's history.

Mike's dropped eight waist sizes since April, and he says he's in an even better place mentally. Walking has transformed his look, given him a daily activity to do with his son, and offered him the chance to explore the entirety of Cincinnati in the most intimate way possible.

"I absolutely feel happier than I ever have," he says. "I recommend it to any dad. Even if you're not a crazy person walking to Sayler Park [from Downtown], it's just so good for mom, and by proxy, for everybody."