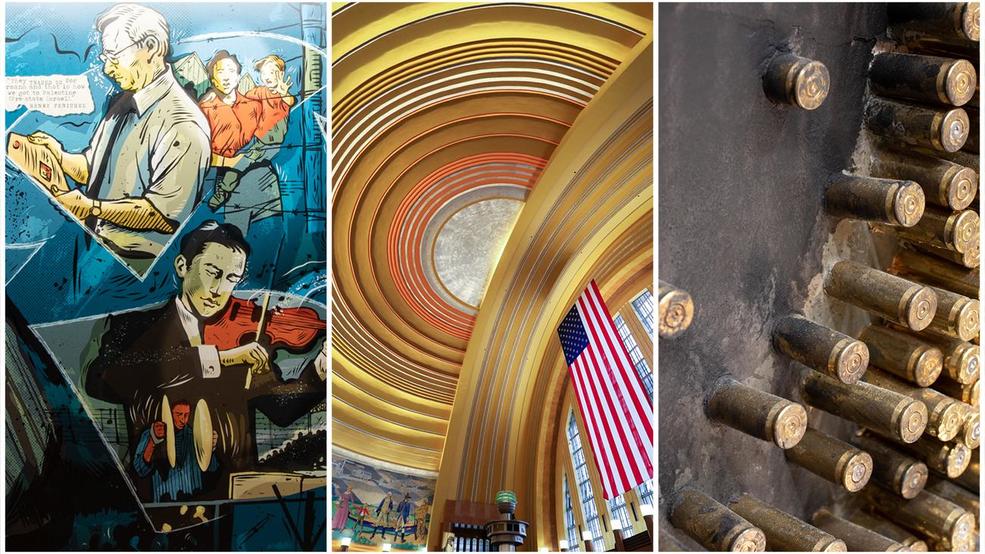 Odds are, if you’re at Union Terminal these days, you're there to visit the Cincinnati Museum Center rather than to catch a train. But that’s why the building, with its incredible rotunda and iconic architecture, exists. This was once the center of travel in the Queen City. During World War II, many connected through and departed on their way to training and eventual combat.

The war brought arrivals, too. With the rise of the Third Reich came institutionalized persecution, discrimination, and targeted murder on an industrial scale. Those who could, fled the continent before, during, and after the war. They found refuge all over the world, many in the United States, and many in Greater Cincinnati. Some arrived here via train to the platforms of Union Terminal, then up the stairs and under the rotunda to new lives. They had escaped and survived Nazi Germany’s “final solution”—the Holocaust.

The story of The Holocaust is a defining moment in world history, the ramifications of which can still be felt to this day. It’s an event that deserves detailed study and strong remembrance. Perhaps the best way to understand the events is through the first-hand accounts of words and experiences of those who survived.

Union Terminal may not be the transportation hub it once was, but the building still carries the memories and stories of survivors with its latest addition: The Nancy & David Wolf Holocaust & Humanity Center.

A MUSEUM OF RESPECTFUL EDUCATION

It’s a Wednesday morning when I meet Sarah Weiss, the center’s Chief Executive Officer. She’s been overseeing the museum’s relocation from its longstanding suburban Cincinnati location to its new home at the Cincinnati Museum Center. Workers are assembling a collection of historical documents displayed alongside the stairwell that leads to the museum lobby. Here, a vast mural designed by local artist Keith Neltner lines the walls. Like scenes in a graphic novel, the imagery shares snippets of the stories of local Holocaust survivors.

Inside the door, Sarah’s team is putting the finishing touches on the exhibits. There’s a flurry of activity, a great deal of work at hand, and an air of accomplishment as the center’s opening nears. Still, despite all the commotion, the gravity of the subject matter still reigns supreme and captures my focus. The museum begins with a media experience that sets the stage and utilizes imagery from the lobby mural. Several survivors highlighted in the artwork transform from their graphic form into their real selves, sharing their experiences and setting up what comes next.

“The museum is designed to both share the history and also challenge us to think about the lessons for humanity as well,” Weiss says.

Passing by a wall emblazoned with quotes from local survivors, we enter the main gallery.

“I arrived in Cincinnati at Union Terminal with a wife, a baby, and a suitcase. And that ended the first part of my life." ~Werener Coppel, local survivor

Pieces of the exhibit discuss the fallout of World War One, the rise of anti-semitism in Europe, and the institutionalization of persecution against multiple ethnicities and cultural groups. As the tour progresses, the focus shifts towards many of the local stories highlighted in the lobby mural. Experiences are expanded upon, context is given, and a connection is established. An area entitled “Mosaic” highlights life in Europe before the war by combining multimedia with artifacts. This section serves to humanize the history being covered here.

Moving forward, the museum ramps up alongside the chronology of history. A wall-mounted sculpture entitled “Massacre,” created specifically for this space, shows victims lined up before a firing squad. Created with thousands of bullet casings, it’s dedicated to the countless victims who were simply rounded up and shot in the “holocaust by bullets” that preceded and then ran parallel to the establishment of death camps and ghettos.

We walk past a replica of the Warsaw Ghetto walls where viewers will eventually be able to peer through and glimpse images of the history that occurred within the forced relocation centers. Behind the museum, the tracks of Union Terminal can be seen as freight trains slink by. Maintaining this window view was intentional, an opportunity the museum’s planners realized as they began laying out the space. The tracks seen in the distance once delivered victims to freedom and new lives. It’s a contrasting sight just to the left of a nearby exhibit, one that highlights the testimony of those forced onto trains bound for concentration camps.

“As we were working in the space and seeing trains go by, we realized that we needed to reveal a little bit of the tracks and that this was the right spot to do it. We talk about those who took different kinds of trains, cattle cars in most cases, to death camps,” Weiss states. “We wanted to expose that duality of the trains in this space.”

The museum encapsulates the history of the Holocaust, doing so with bravery, sensitivity, and respect. Although receiving its finishing touches and not yet open to the public, the subject matter's weight is not lost. I find myself most affected at a mural emblazoned with the word “Rebuilding.” The images layered upon the wall look like that of any family scrapbook. I don’t recognize any faces in particular, but it’s easy to relate to the casual images at hand—the realization that the people seen here are survivors who exist not just in the accounts of history, but the greater community surrounding all of us. They tell the tale and carry on the memories of so many lost—not solely so that history will be remembered, but so that humanity may learn and move forward.

Interactive kiosks in the museum mainly feature local individuals that have made an impact on humanity. As Weiss points out, they highlight people who are “responding to genocide, protecting civil rights, sharing our world, standing up to hate, promoting pluralism, and finding home.”

Things then begin to close with the “Make Your Mark Wall,” where visitors will be able to share their reflections, inspirations, and thoughts on what they’ve just seen. If a visitor opts to pose for a photograph, their image will be added to the digital display.

“The idea of this is that you’re becoming part of this community,” Weiss says. “You’re saying: I’ve learned something, I’m taking something away, I want to do something as a result of this experience.”

Back in the lobby, the museum’s experience comes full circle. Now, the graphic novel-style mural has new meaning. You’re part of the greater story at play not just because of what you’ve seen, but because you’re a human being.

The Nancy & David Wolf Holocaust & Humanity Center will open to the public on January 27, 2019—the United Nation’s Day of Holocaust Remembrance and the anniversary of the liberation of Auschwitz. A ceremonial procession of survivors and survivors’ families will enter the Union Terminal rotunda, fittingly from the direction of the train platforms.

You can learn more about the The Holocaust & Humanity Center at their website.