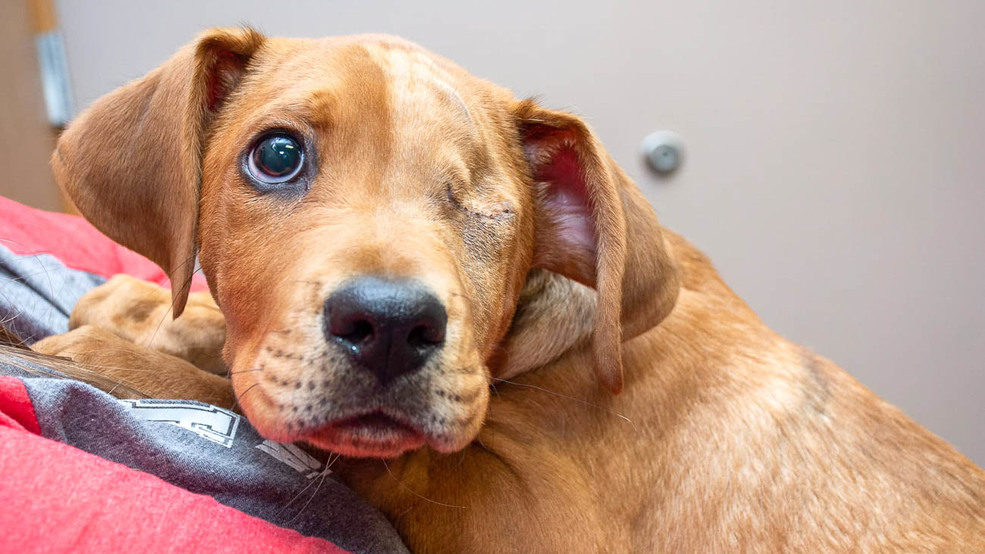 The Formans are animal lovers who are determined to bring change and awareness to animal abuse and neglect laws both locally in our community and nationally. Through Trooper’s appearances, he generates donations for local animal shelters and agencies. You can follow Trooper’s adventures on his Facebook page at facebook.com/whatatrooper. You can also schedule an appearance from him by reaching out to TrooperTelegraph@gmail.com. You can pick a rescue or charity to receive the donations in his honor to help Trooper spread more joy. / Image courtesy of Animal Friends Humane Society // Published: 9.8.19
SEE MORE

You may have heard Trooper’s story by now, but if you haven’t, you should. It has a rough start, but don’t click away. I promise it has a happy ending.

Trooper was one in a litter of 10 puppies born in December of 2018. A few months later, he and his brother were abandoned by their owner’s son in a Hamilton park. He was hit by a train and had life-saving surgery in March 2019. He made it through but lost both of his hind legs, his tail, and an eye. (I think you can figure out where his name came from!)

He was adopted on April 5th from Animal Friends Humane Society by Betsy Forman and her family. Trooper found his forever home with seven canine siblings waiting for him.

So, who would adopt a dog with such great needs?

Answer: The Formans—animal lovers determined to bring change. Trooper is a dog on a mission to raise awareness for the neglect of pets both in our community and nationally. Through his appearances, Trooper generates donations for local animal shelters and agencies. Ultimately, the family has a goal to create change in animal abuse and neglect laws.

Trooper has gotten a lot of media attention, and for good reason. Tragic stories in the news are nothing new, but one with a positive outcome—where the subject turns tragedy into triumph—that's too good not to share.

And if you’re wondering about the puppy brother, Blue, worry not; he was unharmed and has also found a loving home. Blue and Trooper were recently reunited; see that sweet moment and the impact a dog can have on a person in the photo gallery above.

Trooper is a dog like any other, but now he spends his days attending events, spreading joy, and receiving it too. For a pup who’s experienced the worst of humanity, he’s certainly experiencing the best of it now.

You can follow Trooper’s adventures on The Trooper Telegraph. If you would like him to appear at your event, send your request to TrooperTelegraph@gmail.com. You can pick a rescue or charity to receive the donations in his honor to help Trooper spread more joy.