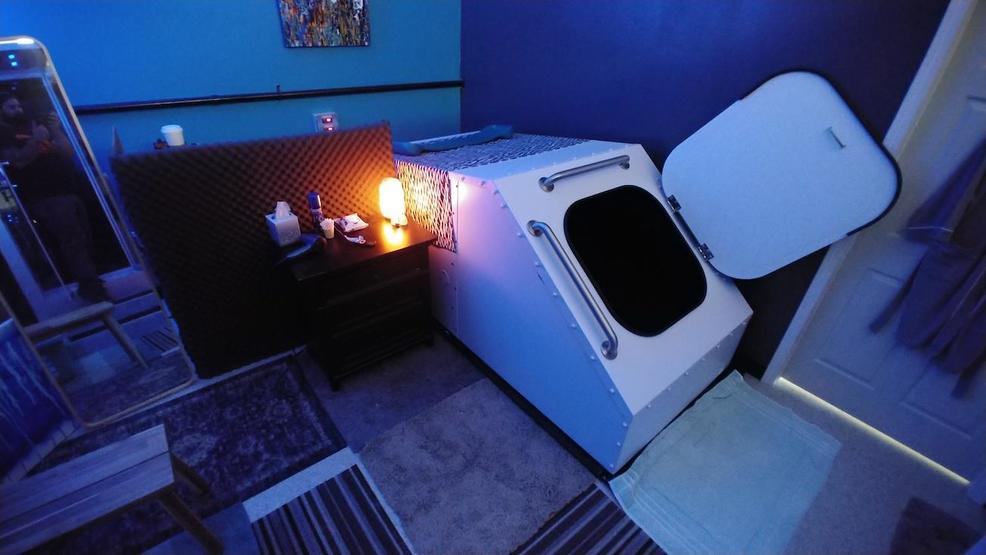 Before stepping into the tank, clients are instructed to shower with a provided soap, put in earplugs, and silence their devices, but ultimately, they’re in total control of their experience. Guests can customize the room however they want, including leaving lights on, playing music, selecting the ambient light color, and they can even choose to leave the tank door open if they prefer—there’s no right or wrong way to relax at Think Tank. ADDRESS: 521 Monmouth Street (41017) / Image courtesy of Think Tank Floatation // Published: 11.12.18
SEE MORE

Have You Tried Letting Your Stress "Float" Away in Newport?

Sensory deprivation doesn’t sound fun, does it? Joe Daniels doesn’t think so either, even though he owns a shop with two tanks of water that could technically fall into that category.

“It sounds so negative,” says Daniels, a personal trainer, gym owner, former body builder, and the proprietor behind Think Tank Floatation in Newport.

There, people come to float in skin-temperature salt water in a fully enclosed chamber that blocks all light and sound—hence where the idea of “sensory deprivation” comes in. Benefits include stress reduction, muscle relaxation, better sleep, and heightened sensations.

“It’s like laying on a waterbed that doesn’t have a skin, or Savasana (a pose used in yoga, also known as “corpse pose”) for 60 minutes without pressure anywhere because you don’t have the ground, couch, or bed tension,” says Daniels.

And if the idea of being “fully enclosed” ignites the claustrophobic in you, relax—you can always float with the door open, and—as Daniels notes—you are in control and can exit the tank at any time.

“There is no exact way to float,” he adds. “You don’t have to turn the lights off; you don’t have to have the door shut. You can customize the ambient light color and float in silence or put on your favorite album. Everyone is different and how we work with people is to find what allows them to acclimate. There’s no wrong way—I think the wrong way is telling people there is a right way.”

Those who could benefit from this type of therapy include everyone from serious athletes, to people with a chronic condition, and even those who just need a break. “Our brain is constantly working to keep us from falling and getting hurt and every muscle is absorbing force,” Daniels says. “We’re constantly reacting to our environment and floating gives us very little to react to.”

People sometimes even fall asleep in the tank. “There are times when we’ve had to knock (on the door) for 15-20 minutes,” Daniels says with a laugh. (Don’t fret—the water isn’t very deep.)

(And here comes the standard “consult your doctor” disclaimer: “We always recommend you talk to your doctor first, especially if you are pregnant or have kidney or blood sugar issues,” Daniels advises. “But it is incredibly safe. It is literally floating on water.” Though he does note that some people with hip issues may have trouble getting into and out of the tank.

Think Tank’s website does a very good job of answering any questions and combating any concerns you may have, but if you have more, Daniels encourages you to simply give him a call.

And there may be no better ambassador. “I’ve always been into alternative ways to heal,” he says. “Floating, for me, became a tool to deal with mental stresses. When you get 60 minutes of deep breathing it became a thing I need to do weekly.”

To learn more or make an appointment, visit Think Tank’s website. It is located at 521 Monmouth Street (41017). You can click through the photos above to get a better idea of what to expect.