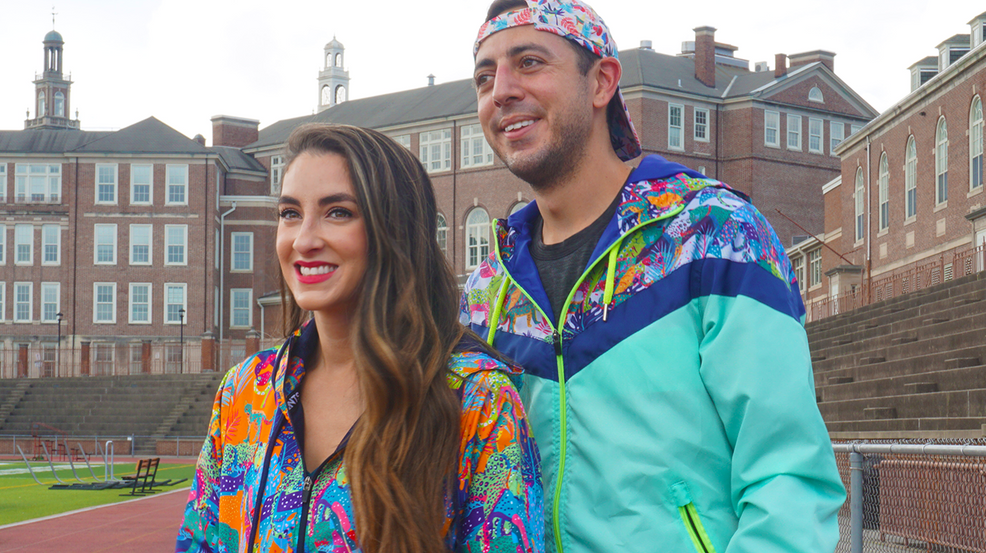 Sprints sells running hats, t-shirts, and windbreakers. Sprints is the brainchild of Eric and Steph Rose. After searching for some more fashion-forward fun running gear for himself and finding nothing, Eric decided he would attempt to change the way running apparel looked. He wanted stuff that put a smile on people’s faces, so Eric and Steph founded Sprints with the belief that running should be a place where everyone is welcome, even those who aren’t elite speedsters. You can get fun Sprints gear online at <a href="https://getsprints.com/" target="_blank">GetSprints.com</a>. / Image courtesy of Sprints // Published: 9.23.20
SEE MORE

I take great pride in my (unique) fashion sense. It’s not that “unique” or special anymore, though. That’s because the path I’ve been carving for decades has finally been followed. Yes, everyone is jumping on the slick kicks and joggers bandwagon. I was at the forefront of the athleisure movement. Just ask my friends. Just ask my mom, who wished (heck, still wishes) I would have traded the sweatpants and sneakers for pants that button (gasp) and dress shoes. I wore clothes with holes that I earned from years of hard-fought sports victories and gut-wrenching losses.

Okay, enough about me. It’s now my pleasure to introduce you to a new brand that takes having fun and looking good as seriously as I do. Say hello to Sprints, the local fashion designer that sells running hats, t-shirts, and windbreakers. Remember those fly windbreakers from the ‘90s? Ah, those were the days.

Sprints is the brainchild of Eric and Steph Rose. By day, they work at P&G as brand directors. By night, they make my lifestyle clothing dreams come true. Initially, I was unaware of the Cincinnati connection, thinking I’d just stumbled upon an athleisure goldmine that was likely located in some hip coastal town. But as I scrolled through some of the designs, I saw a pattern with a flying pig. And I figured it couldn’t be a coincidence. That’s when I reached out to Eric to learn more about the brand.

Cincinnati Refined: Tell us the origin story for Sprints.

Eric: My two passions are running and fashion. I run to learn the ins and outs of the city, meet new friends, and stay in shape. The thing is I’ve always been an incredibly average runner. But I still love it. What I love most about running is it’s the great equalizer; all walks of life [...] run. And what the running community teaches you is that you can learn so much about someone by going on a run with him/her. You can make friends you wouldn’t have otherwise.

If you were to watch any 5K or 10K, you’d see people running in tutus, wearing wigs, putting on temporary tattoos, and rocking costumes. If you talk to these runners, you’ll find that they don’t show up to “win” the race. They run because it makes them feel good, and it makes eating a donut or drinking a beer feel a little better, too. But if you try and find running gear that allows runners to wear this same personality on their sleeve, you’ll find a sea of plain black, white, and grey apparel.

After searching for some more fashion-forward fun running gear for myself and finding nothing, I decided I would attempt to change the way running apparel looked. I wanted stuff that put a smile on people’s faces. We founded Sprints with the belief that running should be a place where everyone is welcome, even those who aren’t elite speedsters. Our gear and our Sprints Fam bring that energy.

CR: How long has Sprints been operational?

Eric: We founded Sprints in the Spring of 2019 and sold our first gear in June of that year. We started online only (getsprints.com). Since then, several retailers, like Fleet Feet Sports, have reached out to carry Sprints gear.

CR: What’s the general inspiration for the patterns that are created? In particular, why do jaguars play such a prominent role in many of the designs?

Eric: We initially liked the jaguar because it’s a sprinter. Over the past 18 months, we’ve built a community of thousands of runners, outdoors people, and just fun personalities that help us co-create our designs. We have a pattern page on our website where people can submit ideas and vote on potential patterns. We also use social media to collect feedback. None of our patterns launch before our Sprints Fam weighs in.

Eric: We launch a seasonal set of patterns and make sure to release at least one new design every 4-6 weeks. Many of our Sprints fans tell us they “need to collect them all” and really look forward to having so many bright and fun options in their closet. About 30% of the people who have bought Sprints gear have returned to buy again.

Eric: The Tropical Jaguars design is our all-time best-seller. It’s also the very first Sprints design. My favorite is the Rainbow Pig pattern that we launched in June of 2020. The pig heritage in Cincinnati is strong, and the rainbow wings pack some extra energy.

Steph: We did a cosmo pattern with planets and aliens not too long ago, and it’s still one of my favorites. Someone from our Sprint Fam had the idea, and we brought it to life within three weeks. You know it’s a winner when it sells out in less than seven days!

CR: What separates your brand from others who share the same space in the market?

Eric: Sprints is about putting a smile on people’s faces and co-creating awesomeness. One of our customers messaged us to share a story about how he can’t run anymore because he is fighting a battle with spinal cancer that has permanently put him in a wheelchair. Sprints gear makes him feel good and confident, and he gets random compliments on the streets of NYC. Stories like that remind us why we created this brand.

While some of the big legacy brands are focused on getting a single performance athlete to break the two-hour marathon, we’re simply trying to help runners have a little more fun.

CR: How do the windbreakers and t-shirts fare in sales compared to the hats? Are you looking at adding anything else to the mix (e.g. shorts, pants, etc.)?

Eric: Hats are our best sellers, and the windbreakers do well in the cooler months. We heard feedback that many runners wanted visors, so we’re releasing our first one this month. We’ve also had countless requests for neck gaiters and plan to release some in the fall.

CR: What else should we know?

Eric: If anyone reading this wants to co-create with us, send us an email at eric@getsprints.com. We love working with local Cincinnati designers!