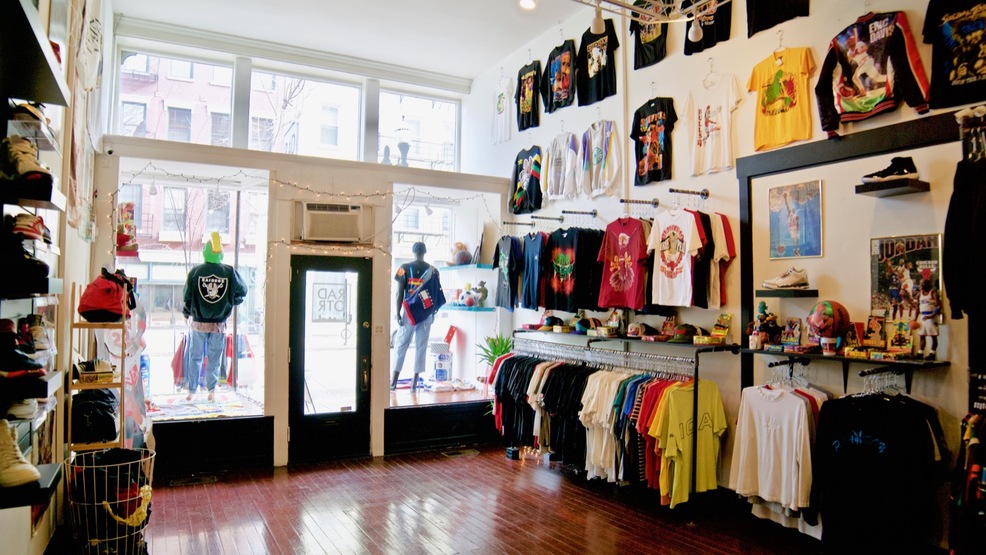 Rad OTR is a vintage boutique that carries retro t-shirts, sneakers, starter jackets, jerseys, toys, VHS tapes, and more. You might not know what you want before you go, but you're sure to find something your wistful Millennial heart can't live without. ADDRESS: 1315 Main Street (45202) / Image: Brian Planalp // Published: 1.31.18
SEE MORE

Rad OTR Captures the Nostalgia From Our Idyllic '80s Childhood

The '80s boombox at Rad OTR is retrofitted with a 30-pin lightning connector, through which it blasts '80s music from a decidedly non-'80s iPod Nano.

That should serve as a pretty good introduction to this vintage boutique, which trades equally in clothing and nostalgia. We’re talking retro t-shirts, sneakers, starter jackets, and old jerseys (grab the SuperSonics kit while you can). There’s also vintage toys, posters, VHS tapes, and video games.

To be clear, these aren’t novelty items made to appeal to our 2018 sensibility. These are one-off hand-me-downs. They’ve been sitting on the racks at thrift stores, waiting for someone to give ‘em a new life. Which means there’s no consistent “stock” of items here. That Adidas Olympics sweatshirt on the wall? You might never see that again because it’s as much artifact as apparel.

Still, what Rad OTR really offers is an experience, one over and beyond the nostalgic idiom at its core. Yes, stepping inside is sure to strum your wistful Millennial heart strings—er, synthesizer. But you’ll also find shopping here an alluringly active experience, like sifting through stacks of vinyl or wandering dusty bookshelves in search of that thing you don’t know you want until you find it.

Like a Kurt Warner Rams jersey, all tattered and threadbare as if it were game-worn.

...Or a Metallica t-shirt so loud and garish, it melts your insides.

...Or a Chicago Bulls jacket from the days when everyone was a Bulls fan, whether you actually were or not.

As for the store itself, Rad OTR grew out of two pop-up shops co-owners Billy Luther and Jacob Courtney held at Righno Boutique in 2016. The pop-up shops were so successful that Luther and Courtney set out to open their own storefronts.

To that end, they enlisted a Cincinnati-born, Chicago-based entrepreneur named R.J. German, whose Rad Vintage was already turning heads in the Windy City. Just a year later, Rad OTR opened on Main Street in Over-the-Rhine, and we’re all better dressed for it.

So stop in to get in touch with your inner '80s star child. You're sure to find something present-day you can't live without.