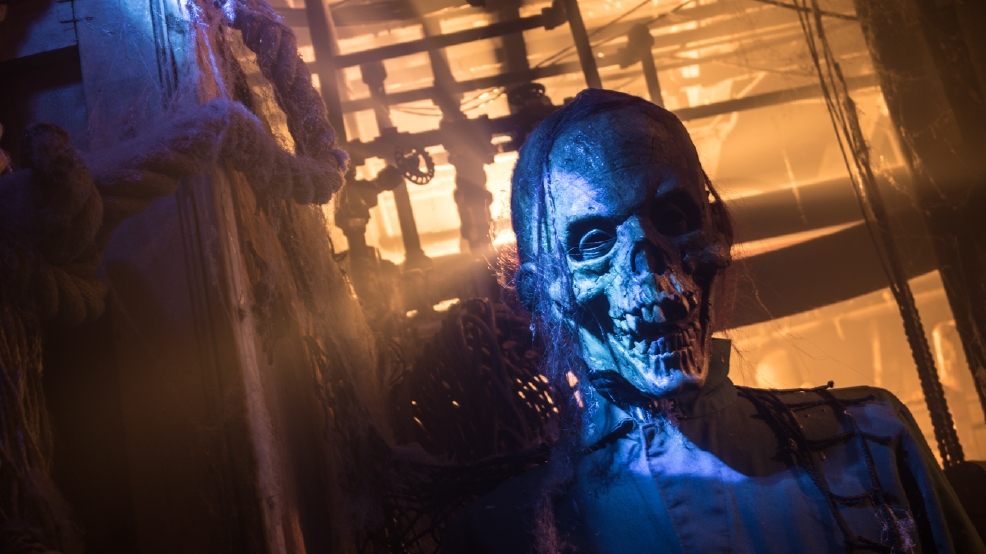 The USS Nightmare is a haunted boat filled with death and disturbing imagery. With two entire floors of horrifying props and costumed actors, your anxiety-filled, 30-minute trek will have your heart beating out of your chest. It is docked on the river at 101 Riverboat Row, Newport, KY 41071. / Image: Phil Armstrong, Cincinnati Refined
SEE MORE

USS Nightmare Is Legitimately Terrifying & We've Got The Pics As Proof

I love a spooky story, and I'll watch a horror film a couple times a year. But haunted houses? Nope.

So when I found myself heading over to the USS Nightmare, arguably one of the area's scariest Halloween haunted houses since it debuted in the '90s, I almost laid a dozen eggs. (I'm a hen in this metaphor now. Deal with it.)

The USS Nightmare is a decommissioned dredge ship that's now home to multiple floors of special effects and costumed actors meant to startle, intimidate, and horrify those brave enough to step foot onto it. Besides for this story, I haven't stepped foot on that thing in nearly a decade for good reason: it's genuinely frightening.

The production value is staggering. This isn't a place where kids dress up in a sheet and jump out at you while a cassette tape of Spooky Soundz Vol. 3 blares over a dusty boombox. This is real, high-end animatronic stuff we're dealing with here.

You'll see props of dead bodies and mutilated corpses.
You'll feel sudden blasts of air hit your face and legs as you move into specific areas.
You'll struggle to keep within your skin as terrifying creatures aggressively jump out at you.
You'll probably need a new set of pants by the time it's over.

Don't believe me? Just go to the gallery above and take a look. Try imagining what it's like to immerse yourself in that world from the comfort of your screen. The pictures are only a little taste of what it's actually like to walk through that nightmare.

And yes. There's definitely a clown room. No, I didn't want to go in there for photos. You'll have to buy a ticket to experience that for yourself.

I'm going back to my safe little chicken coop...

Are you a big, bad lion who isn't afraid of a little floating haunted house? USS Nightmare is for you. Find it at 101 Riverboat Row, Newport, KY 41071.