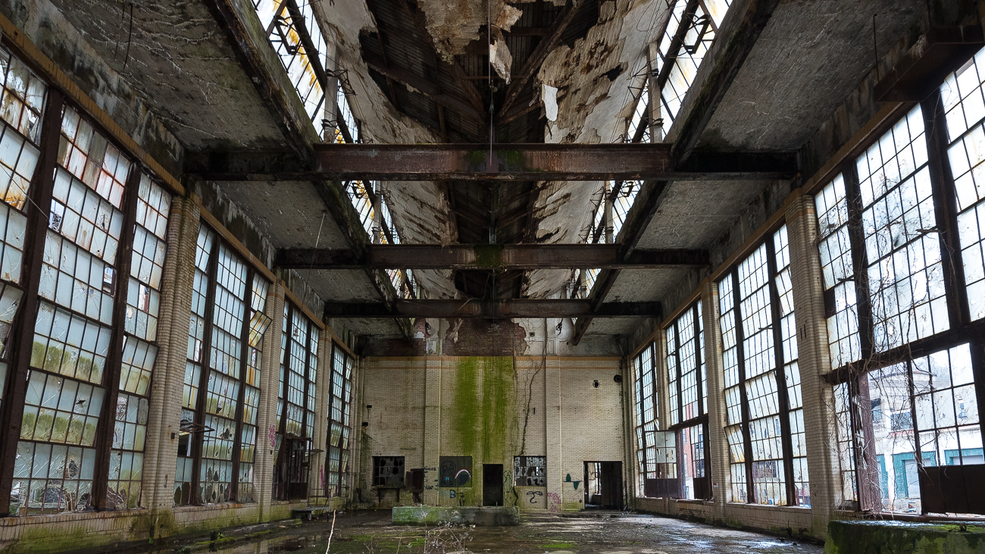 Your vehicle slowly snakes through a neighborhood in Warren County as you descend into the Little Miami River valley on King Avenue. The road's steep grade and a 180 degree turn forces a meandering pace you happily accept out of respect for your own safety. You catch a glimpse of a massive structure just beyond the spindly woods separating you from the river; a smokestack and an angular tower, each emblazoned with that iconic 'P.' It's an unmistakable silhouette.

As you near the final turn, the famous Peters Cartridge Factory completely absorbs your line of sight. The sheer size of the old factory, along with its visible dilapidation, has a signature way of ever so slightly dropping your jaw. Everyone around these parts knows of the old gunpowder manufacturer that's been closed for decades. There's nothing like it in Cincinnati, and it attracts myriad spectators for different reasons. In the last 40 years especially, the darkened factory has become a legendary canvas for graffiti artists, a tantalizing adventure for urban explorers, and a haven for feral cats.

While the forbidden mystique of the place has taken center stage for the majority of our lives, the historic property is cocked and loaded for an entirely new endeavor. After receiving the green light from environmental agencies to proceed, owners Bloomfield/Schon and Associates are redeveloping the site into a dense sanctuary of residential and retail space right along the bike path.

135 apartments will fill the majority of Peters Cartridge's multiple floors, including one premium 4-story suite in the center tower near the entrance. At the base of that tower, a coffee shop has been proposed to open to serve the community of residents who live there. Plenty of parking will be included in the development both for residents (underground parking) and visitors to the commercial spaces (surface lots) alike.

Since the factory is listed on the National Register of Historic Places and state tax credits were acquired for the redevelopment, preserving everything possible is required in the final design. That means the historic elements of Peters Cartridge that still remain will not leave the 14-acre site. Instead of being a ramshackle colossus sleeping next to the Little Miami River, the factory will awaken anew without changing the fundamentals of its appearance.

BEER ALONG THE BIKE PATH

We're most excited about the flagship commercial tenant coming to the redeveloped factory, however. Cartridge Brewing, which will open inside one of the factory's rear buildings, will be the newest addition to the growing list of Cincinnati-based breweries when it opens sometime in 2020.

Cartridge Brewing will make and serve its own beer inside a 10,000-square-foot taproom. An outdoor patio shaded by trees will be constructed off the western side of the building, and they plan to have wine and spirits on hand for those without a taste for beer. They'll also feature cans and bottles of select non-Cartridge beer, like PBR.

To diversify themselves further, Cartridge Brewing will feature a full in-house kitchen offering an elevated pub-style menu. For those riding along the bike path, a quick stop into Cartridge for a pint and a bite will be a welcome reality once it's finished. OTR-based Platte Design + Architecture is designing Cartridge's new space, and it'll be executed by Erlanger-based Furlong Building Enterprises.

Kyle Hackbarth, co-founder of Cartridge Brewing points to its location as a big reason the brewery is unique.

"We had to start with the location first, and then we had to see what this location was capable of holding and capable of doing," he says. "I think what most excites me about this is I want to walk in and see that we have created a welcoming, warm environment for the community, and truly have reinvigorated what used to be a community hub back into one.”

We were given a private tour of Cartridge Brewing's future space and most of the rest of the factory. It's illegal to enter the property without express permission, so this was a rare opportunity to photograph the over-100-year-old structure without fear of prosecution. The photos in the gallery above feature more information about the history of the complex and what's coming to each space.

Scroll up to the gallery above to see the inside of Peters Cartridge Factory.