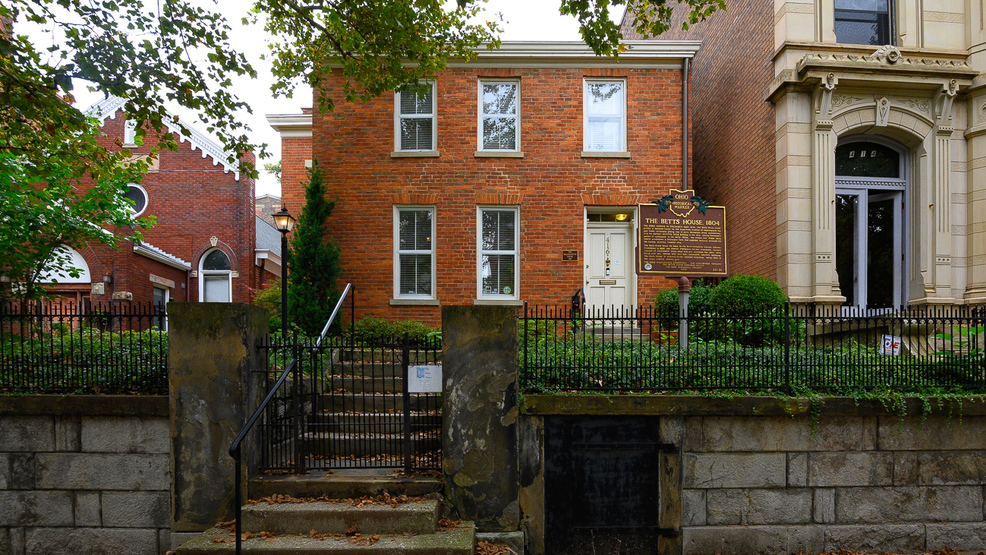 Every month, the public is invited to take a volunteer-led tour of the Betts-Longworth Historic District (BLHD) in Cincinnati's West End. The centerpiece of the district, the Betts House, is of particular interest as it's the earliest surviving brick building in the entire city. Built in 1804 on a 111-acre plot of land owned by William Betts, the house has undergone restoration efforts to keep it standing for years to come. Today, it's a museum owned by the National Society of the Colonial Dames of America in the State of Ohio. / Image: Phil Armstrong, Cincinnati Refined // Published: 9.6.19
SEE MORE

Every month, the public is invited to take a volunteer-led tour of the Betts-Longworth Historic District (BLHD) in Cincinnati's West End. The centerpiece of the district, the Betts House, is of particular interest as it's the earliest surviving brick building in the entire city.

You've likely heard about or visited the Betts House before. Today it's a museum about the history of the Cincinnati Betts family and the time period during which they lived. Inside the house, you'll find a modest assortment of 19th-century furniture, period artifacts, and information about its over-200-year-old history. And if you haven't been within the last year, you'll be pleased to discover the house has received recent furniture additions to enhance the experience.

Appreciation for the Betts House is strengthened after understanding just how old it is, though, and how differently Cincinnati looked when its first few bricks were laid.

The story of the Betts House dates back to the turn of the 19th century. New Jerseyians William and Phebe Betts, seeking to improve their lives by chasing opportunity west, came to Cincinnati in 1800. Upon their arrival, William went on to collect on a debt a local tavern keeper owed him, eventually acquiring a 111-acre plot of land where Cincinnati's West End neighborhood sits today. The property, which was still countryside back then, became the Betts' brickyard and farm. There, the Betts built a humble Federal-style brick house in 1804.

Generations of the Betts family grew up in the house; it received additions in the intervening years to accommodate the growing family. As the countryside receded and urbanity overtook the area over the years, the Betts House remained. By the mid- to late-1900s, the land the Betts House sat upon had changed entirely from rural farmland to a slowly decaying urban landscape.

After a group of people led by a descendant of the Betts banded together to save the house from further deterioration, a renovation in 1990 fortified the structure, enabling it to survive. By 1996, the National Society of the Colonial Dames of America in the State of Ohio (NSCDA-OH) turned the house into the museum it is today.

TOUR IT (AND THE DISTRICT)

As of this writing, there are two tour dates left in 2019: Saturday, September 28, and Saturday, October 26.

The volunteer-led, 90-minute tour explores the history of the Betts House as well as the surrounding region. September's tour coincides with the West End Community Day and discounts walking tour tickets to $5 (from the regular $10).

And for more information about the Betts House itself, check out its website.