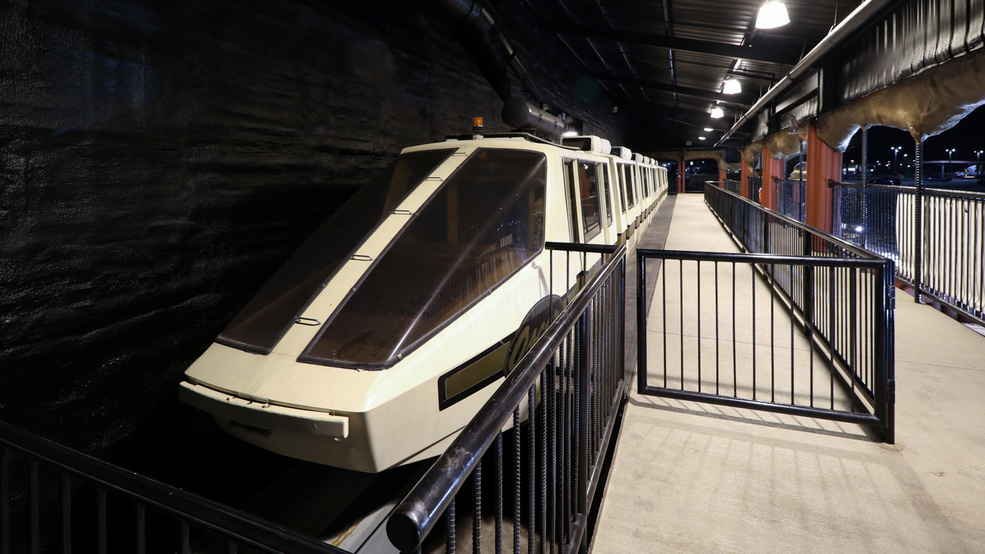 While you’ll have to walk directly past a boarding platform and sitting monorail train to enter The Oscar Station, you should know before you go: the monorail only operates during special events. If you want to ride, you’ll have to attend or book a happening at either of the Oscar facilities where the locally historic, once futuristic mode of transportation is part of customizable event planning packages. / Image: Ronny Salerno // Published: 12.29.19
SEE MORE

When Walt Disney decided to include a monorail in his vision for Disneyland, he saw the technology as the future of public transportation. These days, though, you’d be hard-pressed to find the quiet and sleek electric trains carrying US commuters outside of tourist hotspots, amusement parks, and airports. But Cincinnati has its own version of Walt Disney and he has his own monorail. Now, it connects his personal “Disneyland” with his brand-new bourbon bar, spacious event center, and of course his iconic grocery store: Jungle Jim’s.

Before Jungle Jims' Fairfield location was stocked with animatronics and a world-renown shopping experience, the business began as [Jungle] James [Jim] O. Bonaminio’s tiny produce stand. The enterprise has continued to grow over the decades in offerings, locations, and eclectic character. In 1998, Jungle Jim purchased Kings Island’s former monorail system (opened 1973, closed 1992) for $1 (plus the cost of relocation). The trains sat on the property and were the subject of suburban legend for years until a station was constructed, track erected, and trains began rolling for special events.

The monorail runs between Jungle’s Oscar Event Center (a popular spot for receptions, special events, and corporate meetings) and a station in the outer parking lot. Over the last year, Jungle Jim’s has updated the monorail station into an extension of the Oscar event space. Currently undergoing a soft opening, Oscar Station will host its grand opening in January 2020. The station features an inviting bar with plenty of room to socialize.

The main attraction, though, isn’t just the vast amount of bourbons offered up: it’s how the drinks are served. With the flip of a switch, bartenders can turn on a repurposed dry cleaner’s conveyor above the heads of patrons that rotate a customer’s selected libation directly to them.

The bourbon bar at Oscar Station is open to the public from 4 to 10 PM on Wednesday & Thursday nights, and nearby lounge directly connected to the station serves as the meeting place for the store’s cigar tasting events. While you’ll have to walk directly past a boarding platform and sitting monorail train to enter, you should know the monorail only operates during special events. If you want to ride, you’ll have to attend or book a happening at either of the Oscar facilities where the locally historic, once futuristic mode of transportation is part of customizable event planning packages.

Whether you’re taking a ride or not, though, Oscar Station stands on its own as a great spot to sample a premier offering of bourbon, cocktails, appetizers, and usual favorites.

To learn more about Oscar Station, visit Jungle Jims' site. For more context behind the monorail, you can visit this blog post, also written by Ronny Salerno.