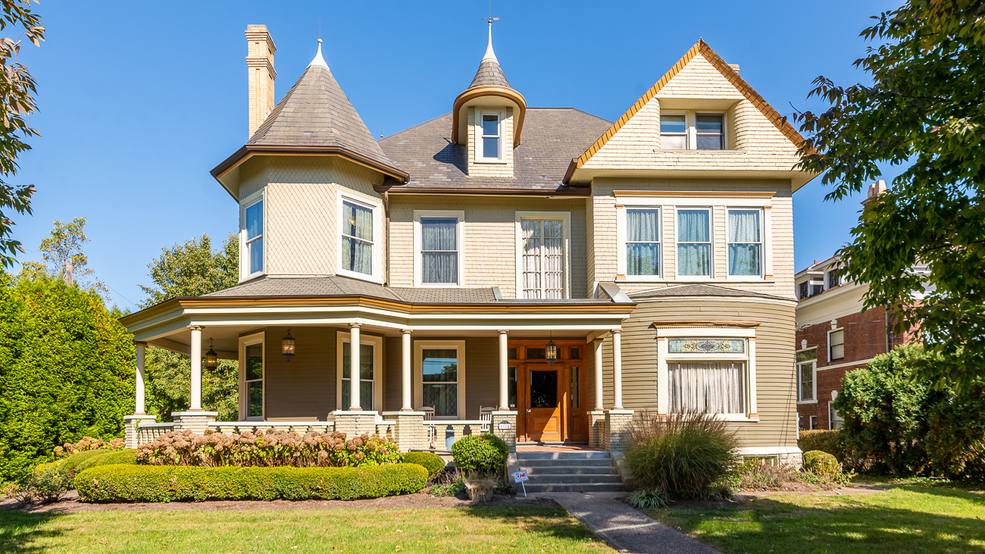 1884 Madison Avenue was built in 1892 and is currently occupied by Rich and Nancy Graeter (of the well-known Graeter's ice cream company). The three-story house is nearly 6,000 square feet and has five bedrooms, three full bathrooms, two half bathrooms, a large basement with a personal rathskeller, and sits on about a half-acre of land at the corner of Madison and Wold Avenues. The Graeters are working with Homeshake to sell the home. There is no set asking price for the home as part of the process. / Image courtesy of Homeshake // Published: 2.28.20
SEE MORE

"It's a grand, dramatic home, but it's a home for family, friends, and entertaining," says Rich Graeter, CEO & President of Graeter's Ice Cream, about his home at 1884 Madison Road in East Walnut Hills.

Along with Nancy, his wife, the Graeters have happily lived in the over-5,000-square-foot Victorian house at the corner of Madison Road and Wold Avenue since the late-90s. After raising their two children there, the couple now finds themselves soon-to-be empty nesters who are looking to downsize. As former residents of Liberty Hill in the 1990s, they imagine they'll return to the urban core once again.

Before thinking about selling, though, they enjoyed over two decades in the house together. One of the big reasons the Graeters originally chose their East Walnut Hills house was directly because of its geographic location. As people who enjoy walking and short drives, they found its central location ideal for getting around to their favorite places without needing to commute for a half-hour by car. Add that to their appreciation of history and marvelous architectural features—the stained glass windows, the multitude of fireplaces, pocket doors, hand-painted murals, and high ceilings—and their house perfectly suited their family of four.

Of course, the house was around for nearly a hundred years prior to the Graeters owning it. Built in 1892, it was designed by architect Gustav W. Drach, whose work includes Woodward High School (now Alumni Lofts), the Textile Building, and the Old River Station (Cincinnati Triple Steam). Though it wasn't built for them, the most prominent residents to live there prior to the Graeters was the family of William A. Pohl, the former president of the Hudepohl Brewery. Pohl was the son-in-law of Mary Elizabeth Hudepohl—the widow of the founder of the brewery. Deep within the basement, a rathskeller (beer hall) with the word wilkommen painted on the wooden door in a classic Fraktur typeface can be found; the Graeters believe the Pohls had it added when they lived there and frequently used it during Prohibition to entertain friends much like how the Graeters use it with their own friends today.

During the two decades Rich and Nancy have lived there, they've poured nearly $750,000 into updating the house. According to Nancy, they did all the "not-so-fun stuff" to make it more livable. Every window was replaced with efficient thermal pane insulated glass, HVAC was installed, the third floor was renovated to have an office and guest suite, and the kitchen was totally redone. They restored the roof, painted the exterior, replaced an old garage with a covered porch, and took on many other transformative and restorative projects to improve the home.

Because they've taken care of the necessary, essential home-owner dirty work, the Graeters believe it will position the next owner to enjoy more exciting projects.

"[The next owner] doesn't have to do things like roof and gutters—all of the not very exciting things," Nancy explains. "[They] can come in and do something really cool."

In speaking with them, it's clear 1884 Madison Road is special to Rich and Nancy. After all, how could it not be? They wanted to take a personal approach to find their home's new owner. To help them in their search, they enlisted the help of Homeshake—a startup that links sellers directly to buyers without an agent.

The Graeters liked that opportunity to connect both parties directly. Rich and Nancy believe Homeshake will provide them a platform to properly negotiate a deal that works for both parties without a realtor pressuring a sale. Since Rich and Nancy weren't rushing to move, Homeshake's flexible model allows them to sell their home on their own timeline.

And unlike traditional realtor-based exchanges, there's no set asking price for the home as part of Homeshake's process. They let the buyer and the seller work out the price based on a comp report Homeshake provides with information about recent home sales in the area, updates, renovations, and more. As such, the sellers don't feel pressure to raise or lower the price. Estimates for similar homes in the neighborhood indicate a price range between $900,000 and $1,000,000.

"I tell people it's peer to peer selling. You're selling to somebody who could possibly be your friend," Nancy says. Because the Graeters have lived in the home 21 years, have spent hundreds of thousands to maintain and update it, and have raised their two kids within its walls, the process of finding a new owner is so much more than a business transaction.

"It would ease the pain of leaving it knowing we're leaving it with someone who's going to love it," Rich admits.

Maybe you can be the one to write the next chapter of the story of 1884 Madison Road in East Walnut Hills? Check out the gallery of images above to see the home, and visit Homeshake's website for more information.