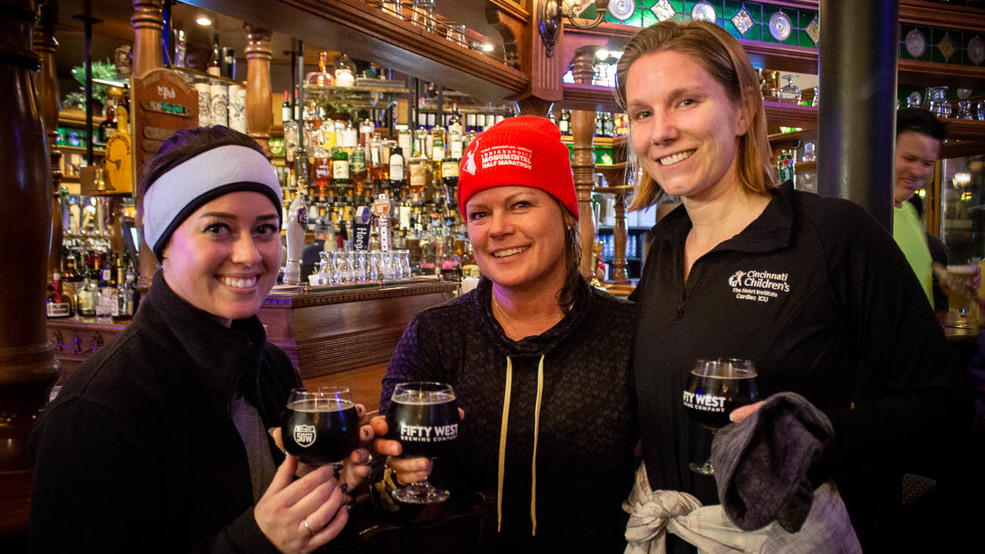 Runners enjoying a drink at The Pub in Rookwood after their run / Image: Katie Robinson, Cincinnati Refined // Published: 1.27.19
SEE MORE

Let Fifty West Brewing Co. Train You for a Marathon With Buds and Suds

When you think of a brewery, you may not automatically think of one that offers a 4-month-long marathon training program. But you do think of a good time and social camaraderie, which made it only natural for Fifty West Brewing Company to initiate the first program of its kind in the area—a brewery organizing an official (and fun) marathon training regimen.

“Running is a very good analogy for life. With running, you set a goal and you go out and you accomplish it. And that’s a very rewarding thing,” says Bobby Slattery, the head cheerleader of the training crew and the owner of Fifty West.

Slattery says building the brewery six years ago is no different than running in a marathon.

He says, “It’s like, I’m gonna set this goal. I need to take these steps to do it. And so I just think the opportunity to share that with people and teach them that they are so much more capable than they probably think they are—I think that’s a really special thing.”

As a fan of running and gaining an ambitious mindset required for the sport, it wasn’t long before Fifty West became the pioneer brewery to have Thursday night running groups. What started as three people casually jogging a few miles together quickly turned into more than 100 people, eager to join the run and enjoy a beer afterwards. As the 2019 New Year approached, Slattery thought it was about time a proper marathon training group got its footing.

GOING FOR THE GOLD(EN BEER)

The primary goal of the Fifty West Training Group is to make sure the participants meet their goals: getting free beer multiple times a week. (Not really, but that is one of the perks, which are listed later in this story.)

The actual goal for runners who registered for the program the first week of January is to learn what it takes to complete a half or full Flying Pig Marathon—Cincinnati’s annual 26.2 mile race in May.

There are at least three weekly group runs organized with various distance options based on the runner’s preference. Depending on the day, there are running routes that begin and end at different bars all over the Tri-state. They also run right in Fifty West Brewing Company’s backyard, along the Little Miami Scenic Trail.

Multiple professional trainers and coaches accompany each group run, offering tips and advice, which can include anything from how to best pace yourself to what you’re even supposed to be wearing while running.

It all leads up to feeling good and prepared come the morning of the Big Pig.

PROGRAM PERKS (BESIDES GETTING HEALTHY AND STUFF)

“Literally, if you’re just interested in a happy hour and want to go to Beer Fest this year, it might be cheaper for you to train in a marathon.” That’s how Slattery justifies the $115 program fee. But there are quite a few incentives that make the price well-worth it.

On Tuesdays, running is scheduled to end at different pubs throughout town where runners receive a free drink after their training. And, staying on the topic of beer, members also receive admission to the Annual Cincy Winter Beer Fest in February, where they’ll be introduced to hundreds of craft beers.

Fifty West enticements include beer and food specials at the bar (the pretzels and beer cheese will change your life), and discounts at Fifty West Cycling and Fifty West Canoe and Kayak.

If those aren’t enough reasons to get you laced up and on the jogging path, there are also “Gear-Up Days” where runners will be able to get exclusive deals on products from JackRabbit, which sells shoes and apparel made for runners.

At the end of the day, you only need one voice to get you up and moving to accomplish something great, but dozens of enthusiastic voices around you, rooting you on along the way, can also be pretty helpful. And a free beer afterwards doesn’t hurt either when it comes to a little motivation. You can find out more about Fifty West’s Training Groups here.