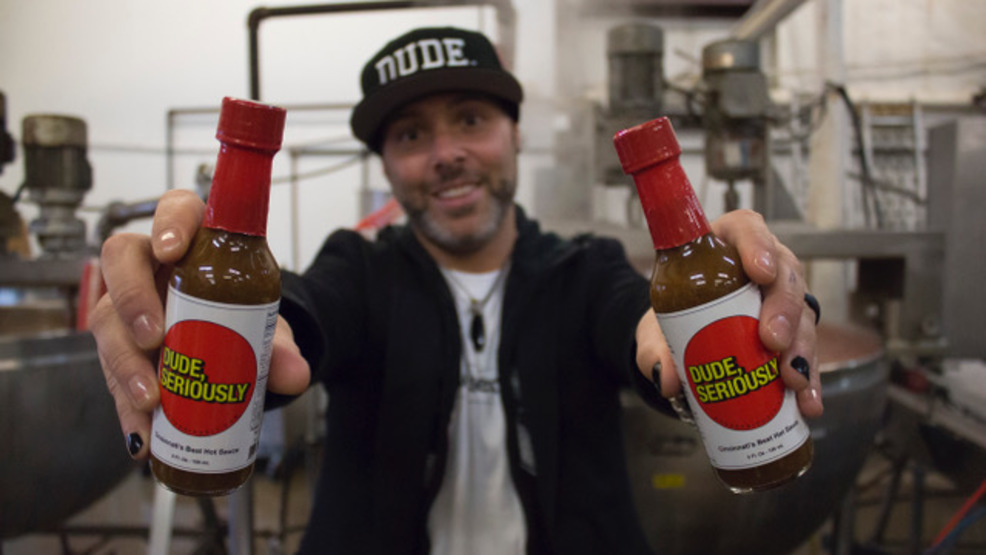 Dude, Seriously, You Need To Try This Hot Sauce

Kai Schneider has an interesting career trajectory. He’s gone from office manager to partner; from marketing manager to director of ad operations; from San Francisco tech titan to Cincinnati convert. Still, there’s one job title that remains steadfast: entrepreneur. And his latest venture is, well, heating up.

The co-founder of Guidebox, a movie, TV, and video API that powers search recommendations for streaming services like Roku, Apple TV, and Amazon, has a surprising side hustle: making hot sauce. And not just any hot sauce. The hot sauce members of the Rat Pack loved in their Bloody Marys so much that in the ‘60s, they moved the bartender who created it, Tommy Villanueva, from New York to Las Vegas so that they wouldn’t have to go without. Schneider’s bottles of this hot sauce — catchily branded “Dude, Seriously” — are now available online, and at such locales like Taft’s Ale House and Nation (where all January long, a portion of the purchase of any “Cool Runnings” burger — featuring Dude, Seriously hot sauce — will go toward a noteworthy nonprofit Schneider supports: Community Care of Southeast Asia, which provides nutrition for children in Southeast Asia).

Cincinnati Refined recently caught up with the 'Nati native and married father of two to chat about how he’s competing with the Tabasco’s of the world, what it’s like being back in his hometown, and what Paris Hilton has to do with it all.

Kai Schneider: When I was a kid, I loved hot sauce. I put it on everything. My grandmother used to say, “I think he’s getting high off that hot sauce he likes it so much!” These days, I’m a hot sauce connoisseur. I’m even in a “hot sauce of the month” club. When I was living in San Francisco, I met this guy, Ray. We really hit it off, and he said, “Come out to my car, I want to give you something.” He opens his trunk and he’s got like, 15 cases of hot sauce in there. It turns out he was friends with Tommy Villanueva, and they had taken the Bloody Mary recipe with the hot sauce to start a business. Within months of its start, Tommy died. And that’s how this guy is rolling around with all this hot sauce in his trunk.

CR: So how did you get involved?

KS: I told Ray, “If you ever make this sauce again, call me.” A year later, he called and said, “I’m going to make this sauce.” My parents happened to be in town, so I took them to Oakland and for 13 hours we made 500 bottles of sauce. [Production has since moved to a manufacturer in Kentucky, and the hot sauce is distributed across six states.]

KS: I used to make trips back and forth to Vegas, and my friend and I were coming back from one of those trips at six in the morning, driving down the highway, going 80 miles an hour, and I just turned to him and said, “The next [road] sign needs to say, ‘dude, seriously.’” Then I pulled over and started writing down like, 300 ideas that you could brand with “dude, seriously.” I had always wanted to create a brand that would mean everything and mean nothing at all at the same time.

KS: It would never go stale. When I started Dude, Seriously it was in the [George W.] Bush era. We were at war, but all anybody was paying attending to was Paris Hilton. I was fueled by that. So the idea was to create a brand that you stick on someone divisive like Paris, and the interpretation could go either way. I wanted something that made you think.

CR: Like the “bipartisan” t-shirts you also sell on the site...

KS: We’re in a world where everyone is so separated — “red vs blue” and all that. So I thought it would be really great to just have a shirt that says “bipartisan” just to say, “Hey, I’m with everyone.”

CR: You left Cincinnati for the sunny skies of California (specifically, San Francisco). Why come back now?

KS: Because we have two kids and were paying crazy amounts of rent, and my wife owned this house in Amberley Village that was just collecting dust, so we thought, alright, let’s go check it out. I had a lot of reservations about moving back, but there is a renaissance happening in Cincinnati, and that felt good to me. I’m not moving to a podunk town with nothing to offer. So I’m enjoying it. The weather, however, is a different story.

Get a taste of Dude, Seriously hot sauce by checking out the “Cool Runnings” burger at Nation Kitchen and Bar, then go buy a 1281 bottle on Schneider’s website Dude, seriously.