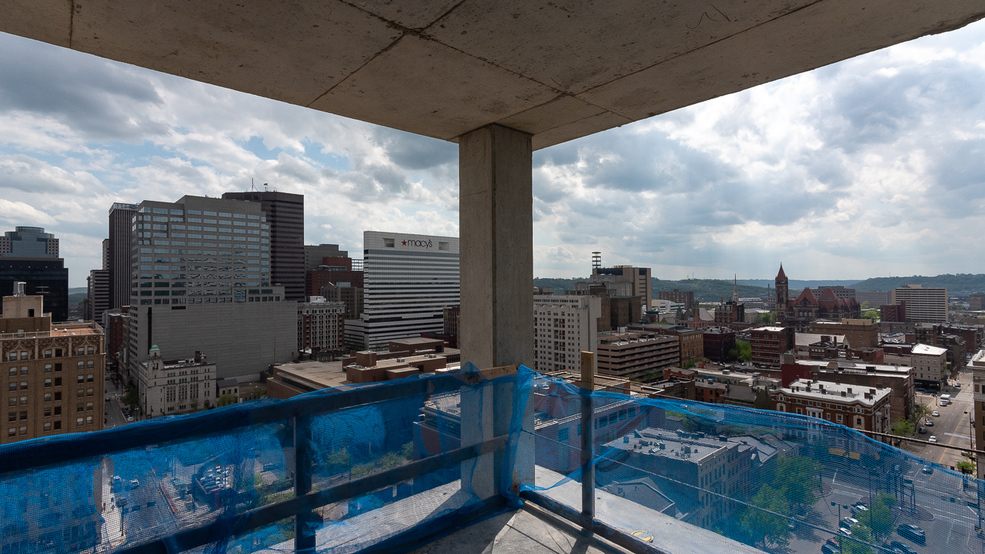 While every floor of 1010 On The Rhine will have an amazing view, floor 11 is notable for its oversized, private outdoor balconies that overlook Central Parkway and Walnut Street on both the north and west sides of the building. A rooftop deck on the 18th floor with a 180-degree view will be available for all residents to enjoy, as well. Parking for residents will be located in the garage directly beneath 1010 On The Rhine and above the new two-story Kroger store at street level. The skyscraper is currently still under construction and is located between Central Parkway and Court Street on Walnut Street in downtown Cincinnati. ADDRESS: 1010 Walnut Street (45202) / Image: Phil Armstrong // Published: 4.30.19<p></p>
SEE MORE

Downtown currently has three cranes in the sky: one at 4th and Race Streets, another at 7th and Main Streets, and a third at Court and Walnut Streets. Without a doubt, Downtown is deep within a hyperactive phase of progress it’s not accustomed to seeing. Sure, the Great American Tower, Encore Urban Living, and Seven were all prominent and recent additions to the city’s skyline, but they didn’t overlap each other like the current three projects.

Of the skyscrapers being constructed at the moment, the one furthest along is the 18-story behemoth at Central Parkway and Walnut Streets. It’s well-known around Cincinnati for being the future “Downtown Kroger” building because it will house the Central Business District’s first Kroger store in decades (the current store on Vine Street is in Over-the-Rhine). As you’d expect, many inner-city residents are thrilled to have the option of shopping at a larger Kroger store than what’s currently offered.

Its convenient location strategically places it in a sweet spot that makes perfect sense when you think about it. It’s at the border of OTR and the CBD, one block from Kroger corporate headquarters, and is within a block of two Cincinnati Bell Connector stations: one that goes north, and another that heads south.

With the first two stories dedicated to the Kroger store and the following seven stories above it committed to parking, that leaves eight additional stories for luxury apartments, which benefit from not only the prime location previously described, but also the fact that living several stories above a grocery store will ensure never having to load groceries into a car again. Entitled 1010 On The Rhine (a reference to the nickname 19th-century German immigrants gave to the canal, which was later replaced with present-day Central Parkway in the 1920s), the apartments, designed by GBBN Architects, are slated to be among the most attractive living spaces downtown when they begin renting later this year.

Here’s what we’re allowed to tell you about today:

There are many more amenities and features 1010 On The Rhine will have, but we aren’t allowed to reveal them just yet. To whet our appetite, Rookwood Properties gave us a tour of both the 11th and top floors of 1010 On The Rhine Rhine while it’s still under construction. Though the apartments themselves aren’t finished, we were able to glimpse the views residents will have after moving in.

And, truth be told, they’re some of the best views one can get by living in the city.

Check out the photo gallery above to see what we mean.

1010 On The Rhine is a collaboration between Rookwood Properties, North American Properties, and NorthPointe Group. To learn more about the upcoming apartments, visit their website.

Also, check out 1010’s Instagram page while you’re at it!