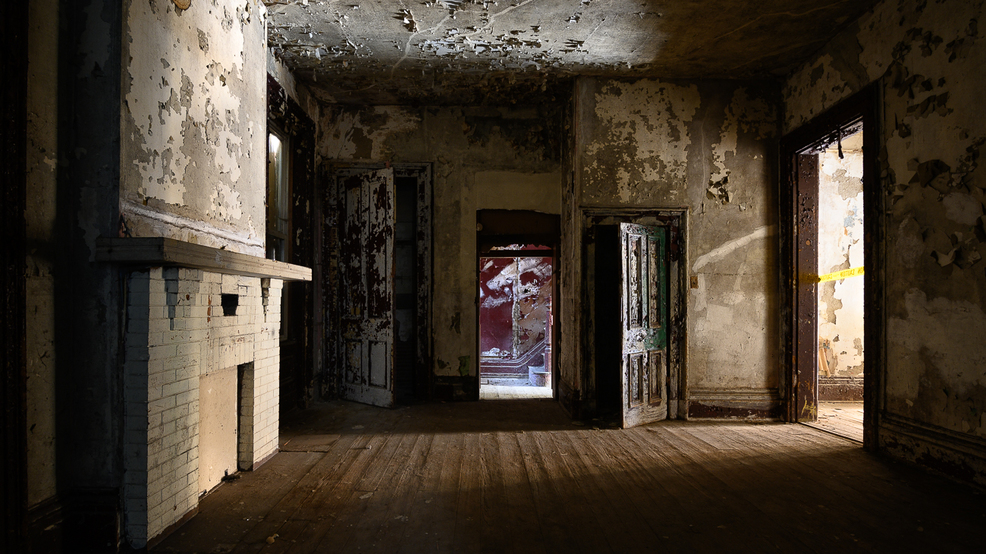 Christian Moerlein, arguably Cincinnati's most well-known brewmaster, earned a fortune from his brewery in the mid-to-late 1800s. In 1871, he had a mansion built at the corner of Mulberry and Loth Streets in Mt. Auburn. The six bed, three full/two half bath brick Italianate house was his private residence until 1882. His son, John, lived in the house until 1905. For over 30 years, the mansion was owned by Moerleins. In later years, the house was subdivided and eventually succumbed to abandonment. The Hamilton County Landbank stabilized the building and acquired it in 2016. Moerlein's former mansion is now for sale (as is) for $320,900. / Image: Phil Armstrong // Published: 6.9.19
SEE MORE

The padlock resisted for a minute before being coaxed open with the right combination of a few numbers and a little elbow grease. Deborah, my escort and an employee of The Port, removed it from the frame and wedged the door open. The building exhaled a puff of dust from the blackness within as if it was relieved someone was there to see it; or, perhaps, a tired sigh brought on by people ruining its seemingly eternal slumber.

Inside, the room's walls peeled like paper waterfalls as the musty scent of old dust floated below our noses. Backlit by the sunny day at our backs, our long, eager shadows plunged headfirst into the darkened abyss in front of us.

We were visiting a mansion, a time capsule recently stabilized by preservationists, that once belonged to a Cincinnatian nearly everyone knew by name—a person whose legacy still has a strong presence in the city 150 years later. We wanted to see for ourselves the safe space he'd built after earning his fortune despite its weathered condition. I was going to photograph it for posterity.

As we descended deeper into the boarded-up Mulberry Street mansion, we reached for flashlights and I clutched my camera's tripod firmly against my shoulder. The house's overwhelming darkness and stillness silently slithered up my spine with every step I took. Intermittent conversation between Deborah and I became welcome wrecking balls to the silent terror slowly building within me as I inched further into yet another pitch-black room.

But terror rebuilds quickly. I swallowed hard and imagined being a hawk to re-coop my inner chicken. It became apparent after a few minutes that I wasn't taking home an Oscar that day.

Attempting to steady an increasingly shaky hand, I slowly panned a hazy beam of light across every textured wall, up into the corners of the high ceilings and down to the floorboards. I took all of it in at the speed of a cautious turtle creeping through a molasses swamp.

It was fascinating.
It was beautiful.
It was unsettling.
It was Christian Moerlein's former mansion.

If you're from Cincinnati, you know Christian Moerlein: he's the guy who started and grew the most successful brewery in the city before Prohibition dried it up. Today, the brand is still alive and well, with a brewery and taproom in Over-the-Rhine, and a restaurant at The Banks. Its beer is served in many establishments around town.

Moerlein began his brewery, which was located in the same spot as Rhinegeist's today, in 1853. Over the next two decades, it grew to become the dominant purveyor of beer in Cincinnati. With it came Moerlein's fortune, and he wanted a new house.

He had his mansion at the corner of Mulberry and Loth Streets built in 1871. The six bedroom, three full/two and a half bathroom brick Italianate house rests upon an earthen plinth several steps above Mulberry Street. The property is outlined by a rough-hewn wall of stone with a wrought iron fence above it. While its landscaping was undoubtedly different when it was constructed, large trees conceal much of its facade today.

Moerlein lived at 168 Mulberry Street (later renumbered to 18 Mulberry) until 1882 when he moved to Ohio Avenue further up Mt. Auburn. His son, John, took ownership of the house and lived in it until 1905. For over 30 years, the Moerleins called that corner of Cincinnati home.

For decades, the house was a single-family dwelling before eventually being subdivided into a three-family home. It subsequently succumbed to abandonment thereafter. 140 years after Moerlein's Mulberry mansion went up, the house faced a wrecking ball that threatened to bring it down.

Fearing the loss of an important piece of Cincinnati history, the Hamilton County Landbank stepped in and utilized its historic stabilization funds to secure and stabilize the crumbling mansion, successfully halting its erasure from the city forever. After pouring $183,000 into stabilization to ensure Moerlein's former home wouldn't topple, the 7,123-square-foot historic residence was listed (as is) for $320,900.

Moerlein may be gone, but someone with an appreciation for local history and historic architecture is destined to purchase his house.

You'll see in the photo gallery above a collection of images that appear well-lit. This is a falsity. As previously mentioned, the first floor was too dark to see without lights. As a result of long exposures and strategic placement of battery-powered lanterns, the pitch-black first floor of the house was able to be successfully photographed. The second floor, thankfully, was secured with plexiglass instead of boards, which made shooting it much more manageable.

We spent two hours inside the house in total. Scroll to the gallery above to see it.

If you think you're the next owner of Moerlein's Mulberry mansion, you can view the listing here.