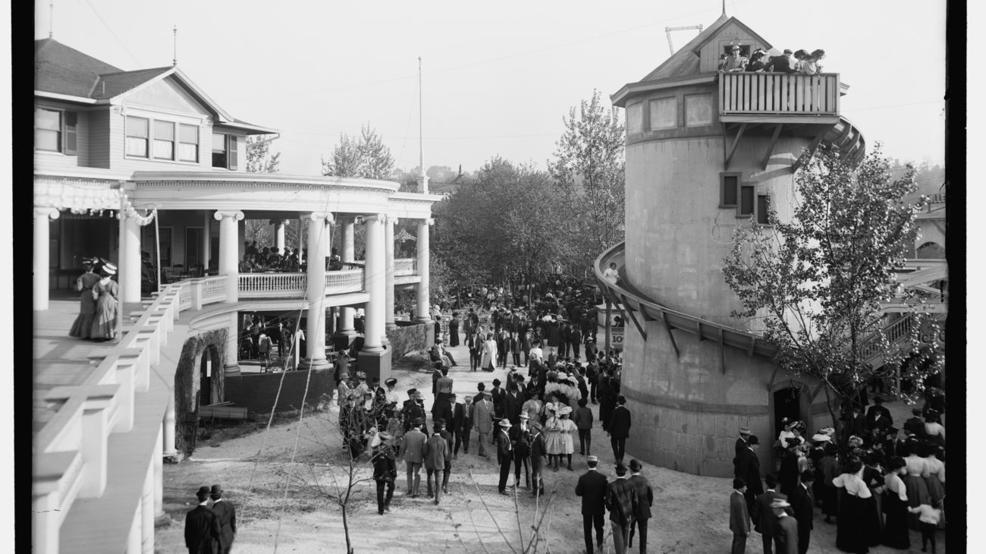 Even if I were standing at the corner of W. Mitchell and Spring Grove Avenues during peak amusement park season—mid-summer, just as the sun’s beginning to set—it would still seem pretty desolate. A freight train is rumbling by and its wheels are sending a piercing scream that’s easily outperforming the black smoke spewing trucks on the road. There’s no cotton candy to be found and the only chance for ice cream is at the fast food joint on the corner. When the sun finally does go down, even on this dreary Winter Saturday, it will fall on car dealerships and industrial vistas rather than behind the wooden supports of roller coasters or the glimmering water of a lake.

Nearly a century ago, this corner of Cincinnati was far different. This was where an amusement park once stood.

In the annals of Queen City (and Cincy-adjacent) amusement park history, most are familiar with and anticipate the opening of Kings Island every year. But there’s also the parks of the past: Coney Island is ingrained in local lore, those from the North can easily recall company picnics at LeSourdsville Lake/Americana, many fondly remember swimming at Surf Cincinnati, and there’s probably a fair few (although, not enough, apparently) who experienced the indoor cameos of Wonderpark and Krazy City.

Still, there are other names, though they may not be as familiar: Ludlow Lagoon, Woodsdale Island, and Chester Park.

WHAT AND WHERE WAS CHESTER PARK?

Chester Park began life as a horse racing track owned by Civil War Veteran and Cincinnati Bell Telephone Company President George Nelson Stone. Stone christened the track after his prized horse, Lady Chester. The facility served as the home for the Queen City Jockey Club for a time, included bicycle racing, and eventually expanded to include other entertainment facilities that could showcase musical events and prize nights.

Sources vary as to exactly when, but in the mid-1890s the park came under the ownership of the Cincinnati Street Railway company. CSR erected maintenance facilities for their streetcar vehicles and began further investing in the park’s “amusement” attractions. Eventually, Chester came to be an atypical “trolley park,” a recreation destination near the end of transit lines that spurred ridership.

According to the Roller Coaster Database, Chester boasted nine amusement rides over its existence that met the criteria for being classified as “roller coasters.” The Blue Streak seems to be commonly found in historical images while the Thunderbolt and the Cyclone lasted until the park’s final days. The most notable coaster, though, may have been The Tickler, a gravity-powered ride that sent guests spinning down a series of quick turns not unlike the Plinko game on The Price is Right. In a Library of Congress photograph made sometime between 1900 and 1915 by the Detroit Publishing Company, a park advertisement was captured boasting that The Tickler had been “re-modeled” and was “not as rough as last season.” It only lasted four seasons.

Roller coasters weren’t Chester’s only claim to fame, though. There was a narrow-gauge railroad, a spiral slide, dining, entertainment, and more. At some point, the race track was removed and replaced by a lake/pool. The arena pool featured a midway both around and across its center, separating the areas for swimming and boating.

For decades, Chester Park thrived. By the 1930s, though, the park had fallen on hard times. Despite being a destination along multiple rail lines, increased entertainment competition, rising costs, and The Great Depression took their toll. Chester Park ceased as an amusement park sometime between 1932 and 1935. Sources on the exact date of its closure vary because there was sadly little fanfare.

Roughly 25 years after the amusement park closed and 18 years after the pool saw its last swimmers before being abandoned in 1941, Greater Cincinnati Water Works opened its facility on the same site in 1959. Their lobby features a tribute to the park in plaques on the wall today.

Walking around the former site of Chester, you’ll be hard-pressed to find any remains of the historic trolley park—the municipal water offices occupy the land alongside the sprawling Superior Honda dealership. Even the surrounding area barely resembles what it once was.

You will, however, find one remnant north of the city in Sharon Woods at the Heritage Village Museum—the old 1872 Chester Train Station. It was relocated from where it once accommodated countless guests on their way to and from Chester Park.

Ronny Salerno is a published writer, photographer, history enthusiast, and author of Queen City Discovery. If you enjoyed this piece about Chester Park, you might be interested in several other amusement park-centric posts he's made for his own site.