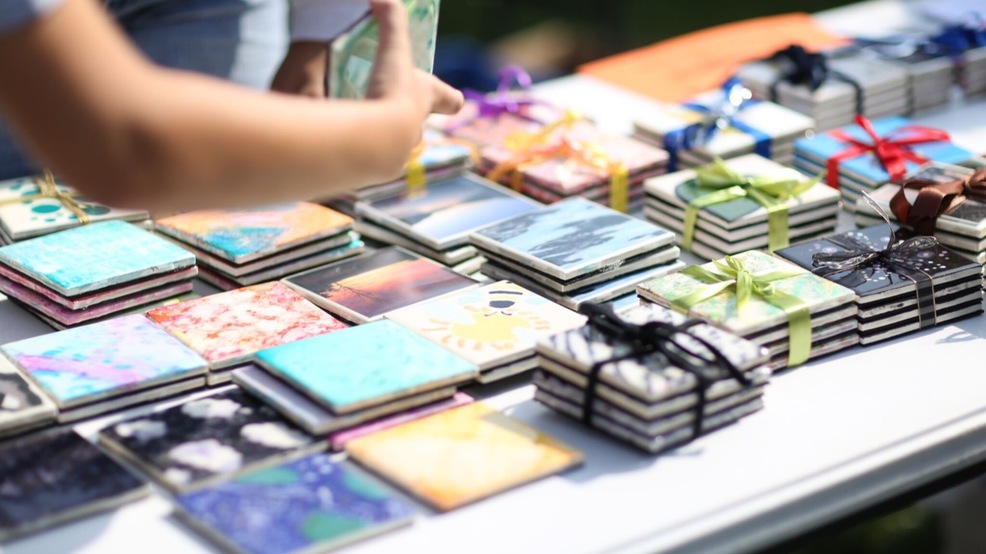 Bellevue's Art In The Park began in 2001 with just eight artists. This year there'll be upwards of 80. Joining them will be food vendors, breweries, live music, and a live auction to benefit Bellevue schools. Parking is available at Queen City Riverboats in Dayton, Kentucky. DATE: September 8 from 10 a.m. to 5 p.m. ADDRESS: Thomas J. Weithorn Memorial Beach Park, 643-665 Frank Benke Way (41073) / Image courtesy of Art in the Park // Published: 9.4.18
SEE MORE

Bellevue's Art in the Park Has Our Attention This Weekend

It's hard to believe Art in the Park's inaugural show back in 2001 hosted just eight artists. This year there’ll be upwards of 80.

Indeed the show has become a September centerpiece in the Cincinnati cultural calendar, an event with cool vibes, good food, and some fine end-of-summer fun. At the same time, the community in which it's located has enjoyed a decade of resurgence. It didn't used to be cool to live in Bellevue, Kentucky. It is now, owing to the walkable streets, green space, proximity to Downtown, craft beer, and impressive restaurant scene.

Art in the Park belongs on that list, too—and not just because it offers a platform for Bellevue's rising cast of talented artists, two of whom brought home first-place prizes at the 2017 show. It also belongs there because it attracts thousands of people young and old, people for whom Bellevue proves a pleasant and charming surprise.

The quality of the show is not lost on the artists. They know it’s all thanks the dozens of hard-working volunteers.

“I am always amazed at how well the show is organized and how helpful the volunteers are,” says Jerry Warner, a popular Cincinnati woodworker whose first art show was Art in the Park in 2007. “It is also great to see the large number of young volunteers and to see their involvement in community activities at such an early age.”

“The park is beautiful, but what makes this show better than the rest are the volunteers,” says Tonya Tate of Nature’s Bath. Tate goes on to praise the size of the vendor spaces, which provides artists like herself enough room to set up their booths differently to maximize sales.

And maximize sales she does. Of Cincinnati’s many art shows, Art in the Park provides some of the highest returns for Tate and artists like her. That too is thanks to the volunteer team. It’s also thanks to the show-goers.

"Art in the Park is my favorite show every year," says Dennis Allen of Whistlecreek Pottery. "It is not just an art show, it is a community event that benefits a great little town."

WHAT: Bellevue’s 17th Annual Art in the Park

ART: You name it, it’ll be there. Paintings, ceramics, jewelry, clothing, accessories, pottery, and more.

AUCTION: A silent auction will take place during the show, first at The Ampersand Gallery (408 Fairfield Avenue), then within the confines of the park. The auction proceeds go toward art supplies and art programming at Bellevue schools.

PRIZES: Four independent judges will evaluate the work of each artist, and $1,350 in prizes will be awarded for outstanding work in the categories of Fine Art and Fine Craft. Attendees will also vote for the People’s Choice Award.

FOOD: Area restaurants and food trucks will be serving up their best grub at the entrance to the show. That includes Avenue Brew, The Elusive Cow, Mama C's Buttercream & Sprinkles, The Pretzel Palace, Roger That BBQ, Schneider's Sweet Shop, Siam Orchid, Chloe's Eatery, and Packhouse Meats. As for adult beverages,, you’ll have your pick of Darkness Brewing, Braxton Labs, or wine from Stonebrook Winery.

PARKING: Off-street parking is an option, and there’s plenty of parking at Queen City Riverboats in Dayton, Kentucky as well.