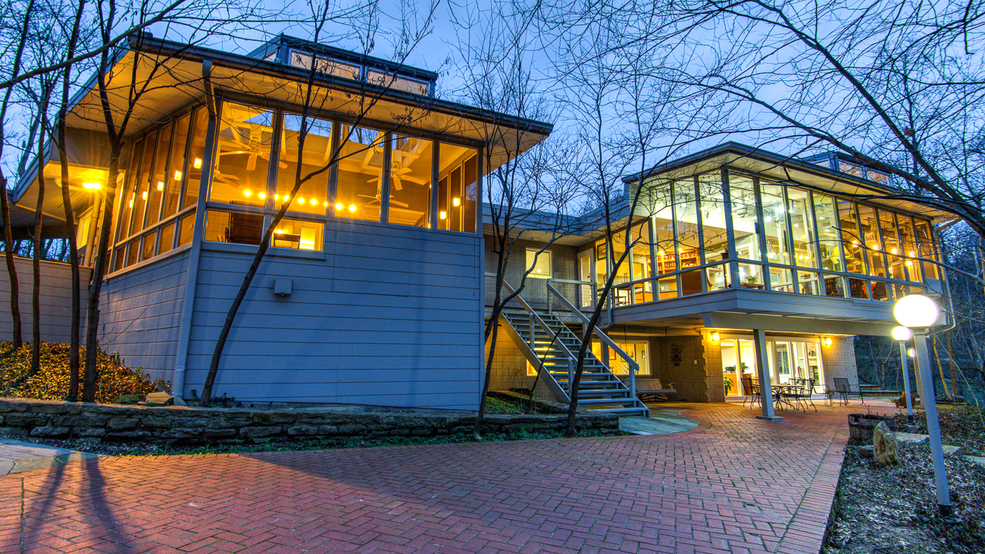 For the Second Time Ever, This 1956 Mid-Century Modern Clifton Home Is for Sale

What is Mid-Century Modern? Put simply, it's a style of design that took form in the middle of the 20th Century that emphasized function over elaborate ornamentation. Homes built in the MCM style are often minimal in their aesthetic with clean lines and a close relationship with nature, usually in the form of large windows that overlook greenery and/or other natural beauty to spiritually invite the outside world into the home.

Ben Dombar, a Cincinnati architect who apprenticed for Frank Lloyd Wright, designed and built residential and commercial buildings in and around Cincinnati. As the construction consultant for Wright, he oversaw the design of the well-known Boulter House in Clifton, which sold last year and sadly caught fire months later. However, Dombar designed his own lesser-known Clifton house, and it's currently on the market for only the second time in over 60 years.

Unlike other high-profile homes, 128 Lafayette doesn't have a snappy nickname despite its importance. Built in 1956 for the Richfields, the house sits below the private lane at the precipice of the woods that surround it. To save money on construction, the original owners had Dombar's blueprints modified and lived there from the mid-1950s to 2001.

Beverly Thomas and Michael Rumundo, her late husband, purchased the home from the Richfields and spent years restoring it to Dombar's original blueprints. As only the second owners of the property since its construction, they didn't have to undo a Frankenstein of additions by a list of previous owners. They added a bridge between the two covered decks, a clerestory in the hall that opened it up to natural light, and walls were removed to make it more open concept—a hallmark of MCM design. They also updated the windows, made improvements to the floors, had custom cabinetry made for several rooms in the house, built a gazebo behind the home, and added modifications such as solar-powered exterior lights and a recirculating pond.

LOVED IT, NOW LISTING IT

Today, 128 Lafayette looks more like what Dombar envisioned back in the 1950s. Beverly, a Cincinnati Public School teacher and consultant for 43 years, says she's loved her time in Clifton mainly because of the tight-knit community of people who make it so special. But Beverly is ready to move on.

You can view the listing here.