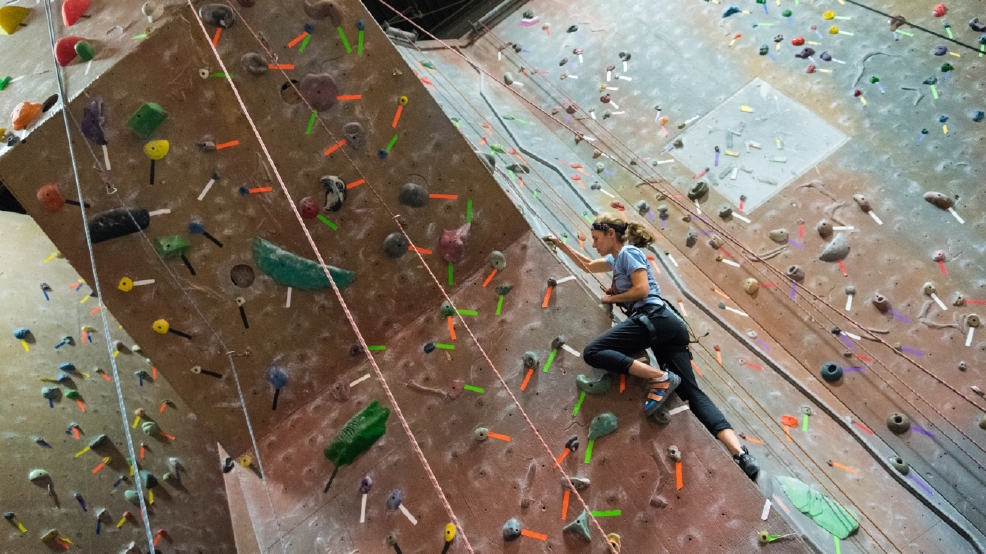 Rockquest Is Here To Meet Your Adventure-Seeking, Indoor Climbing Needs

Where’s your mind go when you hear the name “RockQuest?”

Personally, I think of a PG-13 comedy about two teens who load electric guitars into a van (with crudely drawn lightning bolts scrawled on the side, of course) and hit the road seeking fame and fortune by starting a dumb Black Sabbath-inspired band somewhere out west. Obviously, antics ensue along the way and they learn the lesson of loyalty and friendship (or something) by the end credits.

If for some reason that wasn’t the first thing to come to mind (don’t steal my idea, I’m pitching it to Apatow this Tuesday), you might instead think of a series of indoor climbing walls speckled with colorful protrusions made to replicate the experience of actual rock climbing.

Well, my friend, the latter is what RockQuest, the indoor rock climbing gym, is all about.

THE SKY'S CEILING'S THE LIMIT

RockQuest features a series of routes on multiple walls (plus a boulder) that range in difficulty and are suitable for both beginners and seasoned vets alike. You don’t need to know how to climb walls to participate, so don’t be intimidated by the person climbing the ceiling when you walk in (they likely aren’t human anyway).

All you need is a willingness to try something new and comfortable climbing clothes. That’s it!

If you already rock at climbing, you can bring your own gear. Otherwise, newbies like Leah and I can score a harness and climbing shoes there. And if you’re not sure how to handle the ropes for someone else (it’s called belaying), RockQuest staff can teach you.

And for the chickens like me who don't want to put their friend's life into their own hands, auto-belay machines are another safe climbing option for handling the ropes.

FOR THOSE ABOUT TO ROCK

In addition to all that good stuff, options for full memberships, private lessons, and semi-private lessons pretty much make RockQuest the Mt. Everest of rock climbing joints in Cincinnati.

Except, you know, you can actually reach the summit of this particular mountain of fun.

Check out our gallery of photos above to see how Leah once again made a mockery of first-time-climbers by ruling the rock wall like she’s been doing it for a billion years.

Load up the van and get your heavy metal butts to RockQuest, located at 3475 E Kemper Rd, Cincinnati, OH 45241.