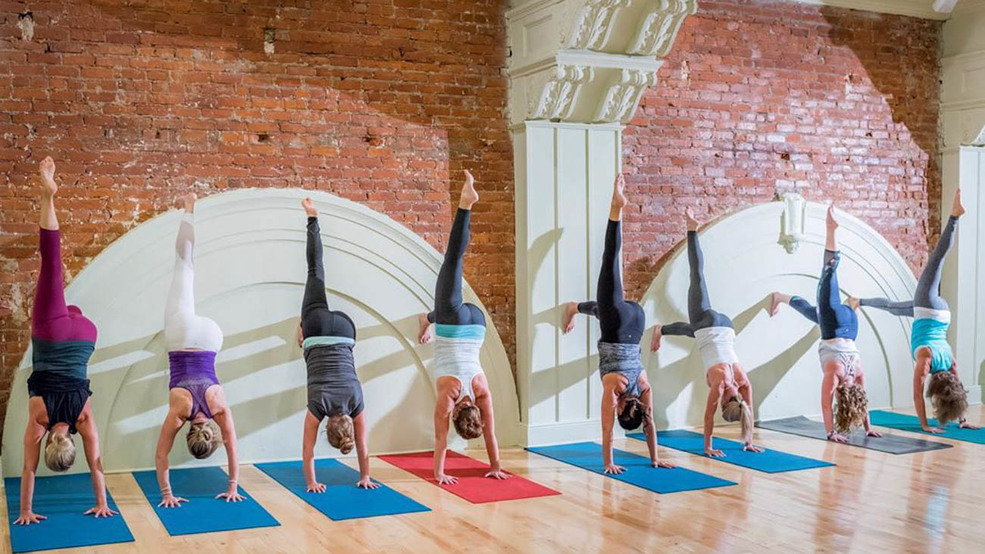 Mint Yoga Studio is located on the third floor of the historic Hiland Building in Fort Thomas. What was originally a theater back in the day, and home to a dentist’s office at one point in time, the studio that now occupies the space continues to boast the site’s 13-foot ceilings, exposed brick, and plenty of natural light that gives it a refreshing atmosphere. ADDRESS: 18 N Ft Thomas Avenue #301 (41075) / Image courtesy of Mint Yoga Studio // Published: 8.31.19
SEE MORE

Mint Yoga Studio is tucked into the historic Hiland Building in Northern Kentucky. When Siri announced I had arrived at my destination, I was admittedly surprised. An elevator ride up to the third floor and a few steps past a menagerie of tenants led me to Mint Yoga Studio’s front door, back-lit by a flood of natural light. It isn’t the cookie-cutter space you’d expect from a yoga studio, and that’s precisely the best part of all.

Mint Yoga Studio on Fort Thomas Avenue was once the home of a dentist office. For many, it was challenging to see how the space might work. But it was Mint’s creator, Tiffany Brennan, who saw beyond the mundane office space to the potential for a regular community yoga practice.

Her vision led to uncovering some of the most beautiful architecture hiding beneath the walls of the space. Behind the neutral-tone drywall and drop ceiling were beautiful brick walls, ornate crown molding, and 13-foot ceilings, revealing the history of the Hiland Building.

Originally a theater, Mint Yoga Studio now pays tribute to the Hiland Building’s creative roots with an equally creative series of classes they offer. All of the Mint Yoga Studio teachers have been trained in different places, each bringing their own personal touch to the practice.

“Some teachers om, others don’t,” Brennan explained. “Some teachers are really traditional while others are wildly creative. But I believe there’s space for all of that. Here, it’s not dogmatic. We don’t follow one school of thought.”

Brennan first got her start in Ashtanga Yoga, which follows a very regimented, specific sequence. But after training in additional yoga philosophies, she now sees the practice as more than just black and white.

“There is no one right way,” she said. “It’s more important to focus on your individual experience.”

It’s that emphasis on individuality that inspired the studio’s name.

“Mint, like yoga, is multi-faceted,” said Brennan. “It can be cooling, healing, and even spicy.”

Visit Mint Yoga Studio’s website to learn more about all of the classes they carry. There’s something for every age, experience level, and goal.