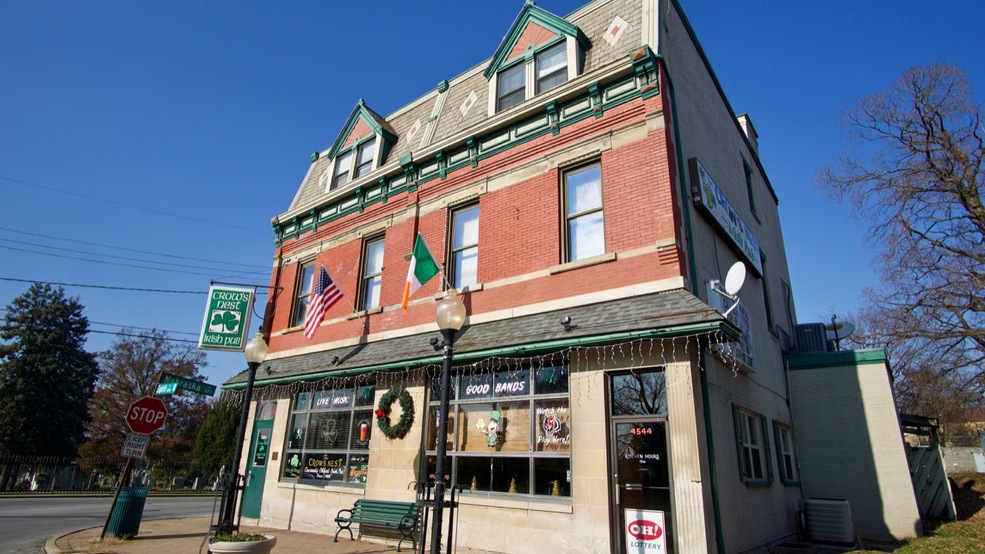 One of the oldest bars in Cincinnati is the Crow's Nest. It's an Irish pub and a good bet if you're in the mood for friendly banter, a well-poured pint of Guinness paired with a bag of Grippos, and an open mic night every Tuesday. ADDRESS: 4544 Eighth Street (45238) / Image: Brian Planalp // Published: 12.13.18
SEE MORE

It’s noon on a Monday. A bar in West Price Hill is striped by light coming in through the blinds. A few chairs are occupied, and an aimless, intermittent conversation unfolds. It drifts into high-school sports and the whereabouts of offspring before getting held up around the semantics of certain ranks in the Navy.

At the same time, a beer salesmen is trying to pitch a new local brew to the bartender. She wants to think it over. He’ll have to come back.

A while later, the door opens. It invites a rising chorus of hoots and hollers together with one, “Well, look who it is!” Suddenly the occupancy has doubled to eight. Shortly, the bartender says into the phone, “Linda, I’m about to kill your neighbor.” She’s referring to one of the newcomers, and she’s joking. I think.

This is the Crow’s Nest. If there’s a Gaelic word that mixes the relevant parts of ‘proletarian’ and ‘bucolic,’ that’s what I’d use to describe it. Otherwise, it’s a deliriously rag tag sort of place, a place that exists almost entirely as a tribute to its lengthy past, rich lore, and authentic Irish heritage.

I won't say it isn't rough around the edges. But there's plenty here to enjoy if you're in the right mood.

The Crow’s Nest opened in 1895 at the end of the Elberon Avenue streetcar line. That makes it one of the oldest bars on Cincinnati’s West Side (best-side).

Descendants of the original owners still own the bar today. It belongs to the family of Giles O’Dell, whose mother, after immigrating from Ireland, lived on the third floor through the 1920s. (Some say she never left; more on that in a moment.)

The decor has Ireland written all over it, in some cases literally. There’s an appropriate amount of Notre Dame memorabilia, including a framed copy of Grantland Rice’s famous “Four Horseman” article. Above, the tin ceiling is painted to imitate the Irish flag, with vivid swaths of green, white, and orange. In the back room, pictures of Irish bars adorn the walls beside Irish proverbs, maps of Dublin, and the like.

Indeed, the Crow’s Nest is unmistakably Irish, down to the potato-themed menu. Alas, that’s a joke: The kitchen closed last year, so their provender consists only of Grippo’s chips. Good enough, though, especially if paired with a Guinness or a spoon-poured black and tan.

Back to old Mama O’Dell. She and her husband are said to haunt the Crow’s Nest to this day. From the street, you might see the couple dancing on the third floor. Inside, you might also enjoy an eldritch flicker of the overhead lights. And if you should set down your keys or the television remote, you might find they turn up in entirely different parts of the bar.

Of course, noticing the liquor bottles and the beer taps, you might voice an alternative explanation for said paranormal shenanigans. If you do, though, take it as a sign that you haven’t yet consumed to the point of gullibility, and order another Guinness.

The Crow’s Nest true calling card is its music. Since 2006, every Tuesday night has been open mic night. It’s often Americana and bluegrass, the same sort of music for which Cincinnati was famous when Crow’s Nest was founded.

The outfits are varied, and they’re often more talented than you’d think. Much in the same way service workers congregate in their favorite dives, Crow’s Nest draws in a crowd of musicians’ musicians. Sometimes the results are superlative. In the event that they aren’t, you’re always a well-poured Guinness away from thinking they are anyways.