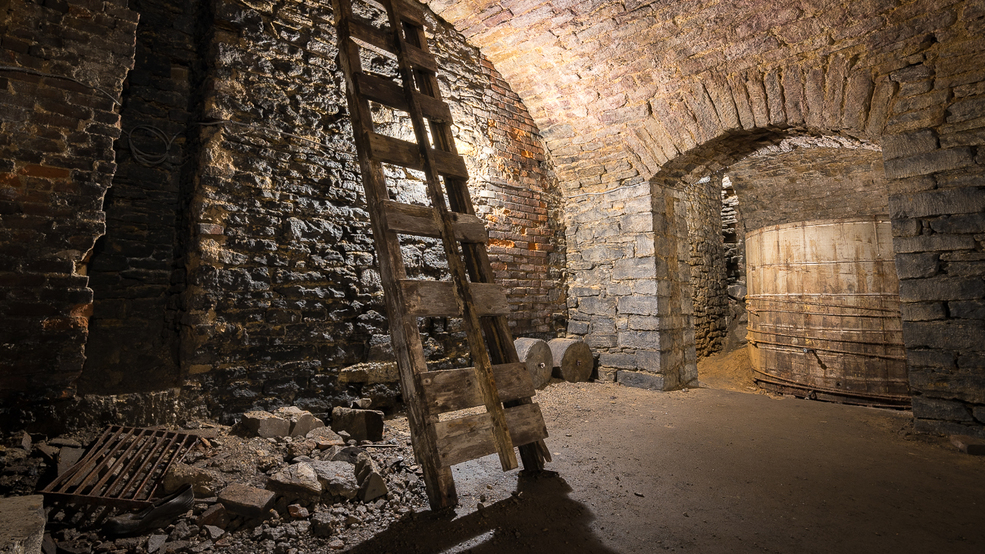 The cellar where the 150-year-old yeast was found sits beneath the building Epicurean Mercantile Co. used to occupy on Race Street in Over-the-Rhine. It had been sealed for over a hundred years, preserving the vat and the yeast within it. / Image: Phil Armstrong, Cincinnati Refined // Published: 11.5.18
SEE MORE

Cincinnati has a long history of brewing. It’s been covered extensively in books, online articles, and local walking tours. Heck, we’ve even done our fair share of pieces on breweries and beer. But we’re not here to talk about brewing history of yore again. You’ve heard all that already.

Instead, let’s talk about the brewing history being made today by a modern brewery who does things differently. Urban Artifact recently brewed a beer that will write an important chapter in the annals of Cincinnati brewing history—and it’s all thanks to someone not cleaning out their basement on Race Street.

Mike Morgan is an expert on Cincinnati’s Brewing Heritage Trail. There isn’t a known brewery cellar he hasn’t already spelunked. He’s understood to be one of—if not the—person who knows more about Cincinnati’s beer history than anyone else.

Because of this, Morgan knew about a sub-basement beneath the (now closed) Epicurean Mercantile grocer on Race Street. His research found the cellar was once used as storage by Christian Moerlein, Koehler (later known as Hudepohl), the Kauffman Brewery, and several others during a time before electricity and refrigeration. Inside the basement, a wooden vat dating back to pre-Civil War times miraculously stood intact thanks to its forced seclusion; the basement had been sealed off from the world above for over a hundred years up to its recent rediscovery.

He went to his friends at Urban Artifact and told them about the contents of the cellar. Since they specialize in making beer using wild-caught yeast, the idea of a fermenting tank still potentially having original brewer’s yeast clinging to its walls was tantalizing. If anyone could reanimate old yeast into new beer, it was Urban. However unlikely it was, they needed to try it anyway.

The crew met up and descended into the basement to collect samples while local video production firm Seven/Seventy-Nine Video tagged along to document the event.

Much to their surprise, the vat still held loads of yeast. They gathered 60 samples from the vat and walls surrounding it, placing them in jars to ferment for six months. After the fermenting process, three specimens were sent to Chicago for evaluation.

It was a shot in the dark. The odds were against them. The Urban team and Morgan eagerly awaited word from the Windy City.

THE MOMENT OF TRUTH

When they were notified that the results were in, an excited Morgan and Bret Kollmann Baker, Urban’s Director of Brewing Operations, drove to Chicago to receive them in person. Of the three specimens they sent, two were viable for production. What’s more, one of the two strains were actually undiscovered up to that point.

It was a success. Their 19th century yeast was destined for new things. They’d beaten the odds.

Taking the brewer’s yeast back to Urban Artifact’s operation in Northside, the team began brewing two barrels of beer using the 150-year-old yeast culled from the depths of that pre-Civil War vat.

This has never before been done. The process of producing beer using original brewer’s yeast of this age is unprecedented. Cincinnati brewing history continues to be made by actually using history itself to brew new beer.

On November 9th, Urban Artifact will tap the historic beer, which was named "Missing Linck," for a party of 400 guests. Assuming it’s good, the brewery will release it to the public later on.

Visit the event page for the November 9th tapping on the brewery’s Facebook page. Urban Artifact is located at 1660 Blue Rock Street (45223).