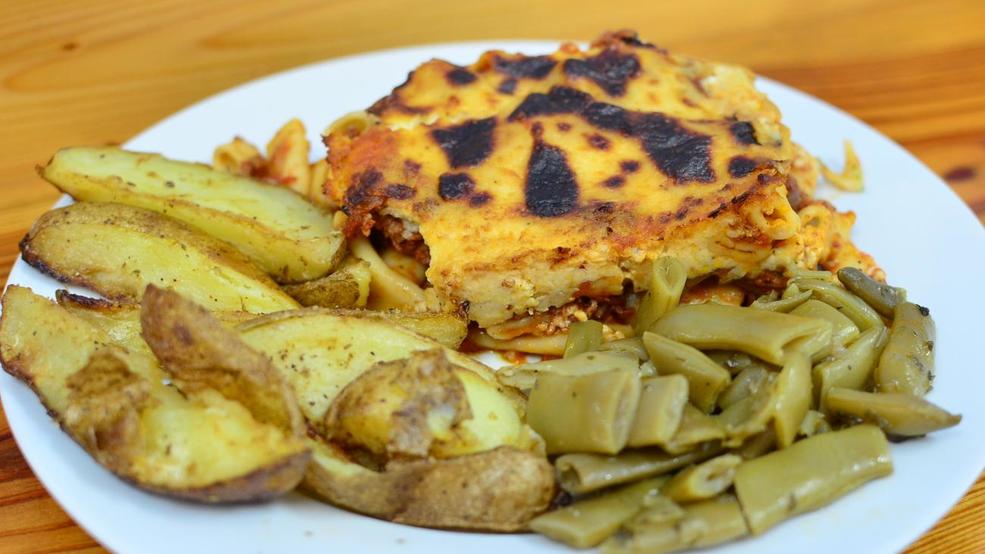 My Big Fat Greek Wedding was an indie film that reached cult status back in 2002. The Portokalos family was big, Greek, had lots of opinions, and, most importantly, loved food. That’s pretty much the environment John Strehle grew up in, as a first-generation American from a large Greek family based out of Chicago.

How does this relate to Cincinnati? Strehle and his wife, Eileen, recently opened Three Dogs Kouzina, an authentic Greek restaurant in Mt. Healthy. “Kouzina” means kitchen, by the way. Oh, and about the three dogs? Well that’s in honor of John & Eileen’s three dogs: Chewy (13, Chow/Lab), Wrigley (5, Blue Heeler), and Bonnie (5, Terrier Mix).

The space, which is located on Hamilton Avenue, had been previously occupied by a Greek restaurant called BluBlu. But that restaurant hadn’t been in operation for four years, so it’s been a welcome addition to have baklava, gyros, and spanakopita back in Mt Healthy.

The blue and white decor are particularly fitting for the Mediterranean vibe. And because family is so important in the Greek tradition, Three Dogs Kouzina has hit that point home by lining the walls with pictures from John’s childhood. His yaya (grandma) and pappoo (grandpa) even show up on the doors to distinguish between the men’s and women’s restrooms.

Now, of course, a sweet story about family is good for melting the heart, but that isn’t gonna answer the call of a hungry stomach. But you know what is? Pastitsio.

I don’t know where you’re headed for dinner, but I’m going to hang out with three cute dogs.