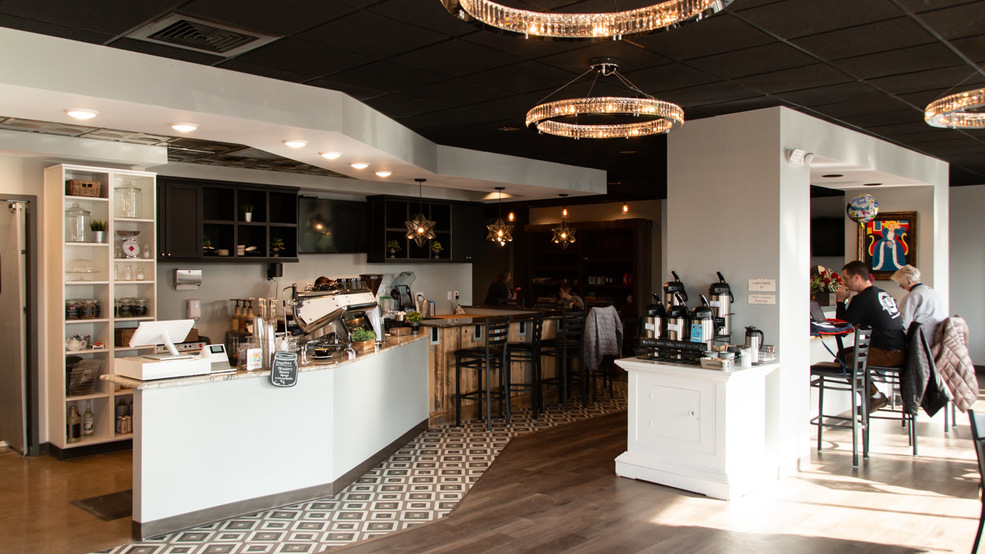 The Coffee Exchange of Pleasant Ridge relocated its coffeehouse just a few blocks from its former Pleasant Ridge location. The previous spot had originally opened in 2013 but was destroyed in a fire five years later in 2018, resulting in major losses and uncertainty in the direction the shop would take. Within two weeks of the fire, however, owner Sarah Peters and Joe, her husband, had already expressed an interest in their present-day location's building, intrigued by the amount of space it offered, the free parking, and the ability to open up another block of the entertainment district to development. They opened their new doors in January of 2020. ADDRESS: 6041 Montgomery Road (45213) / Image: Elizabeth A. Lowry // Published: 2.24.20
SEE MORE

When I first went to visit Coffee Exchange for this article, I walked in, did a lap, and left, having spoken to no one and taken zero photos. And it wasn't because of some health code infraction or a "nothing to see here" scenario.

In fact, the opposite was true: On only the second day of operation since a fire destroyed their original building on June 8, 2018, the large, pristine coffee shop was packed. I'm talking to the gills, and mostly with parents and school children from the nearby Pleasant Ridge Montessori School.

As I stepped over a number of these kids' legs while taking said lap (while wondering to my middle-aged self, "Since when do elementary kids hang out in coffee shops?") I thought two things: 1) Wow, this is an amazing turnout, and 2) considering its success, would I be able to get my job done any time soon? (It turns out that the school coincidentally had an early release on that day.)

Luckily, my opportunity came a week later, and, while the shop was still definitely bustling, I was able to find a seat and drink a cup of Joe with Joe Peters, owner Sarah Peters' husband, while Sarah tended to an apparently rather large ice cream situation.

The original location of The Coffee Exchange of Pleasant Ridge was right next to the former Molly Malone's, just a couple of blocks from where it sits now. They opened in May 2013 only to close five years later due to a fire that destroyed all but a few precious items—the original sign, Sarah's grandpa's lamp, and an American flag.

As these things go, the Peters went through a lot of unknowns following the fire. Would they rebuild? Move locations? Even open back up at all? However, within two weeks of the fire, they had already expressed an interest in their present-day location's building (which opened in January of 2020), intrigued by the amount of space it offered, the free parking, and the ability to open up another block of the entertainment district to development.

"Any time you go through anything like that, there is uncertainty, and we had to weigh all of our options and walking away was one of them," Joe says. "But then we got this huge support from the community, [through] fundraising and moral support, which is very humbling and makes you want to push forward and reopen."

Since Sarah found herself with about 3,200 more square footage in the new Coffee Exchange location, she quickly realized they could do more. Way more. Like transfer their liquor license and put in beer taps; devote a large section in the back to wine retail; expand Sarah's catering business; give Freddie Baudry of Baudry French Pastries a kitchen to bake in; and put in a local, independent talk radio station called Ridge Radio...because, why not?

The plan is that Ridge Radio will stream online according to a schedule, but then you could also find the programming online as podcasts to binge at your leisure.

You might say The Coffee Exchange truly is a one-stop-shop in the ever-growing coffee house industry here in town, and that's on purpose.

"More than anything, we want to be a place that offers something for everyone in the community," Sarah said. "If you want a quiet place to have a glass of wine with friends or want to bring your kids and have something to do here, they can play a game. I think just all the opportunities that we have now as far as more room, more people in here at a time and more space to store things, and every day we think of new things we can do when we finally get the time."

The Coffee Exchange of Pleasant Ridge is located at 6041 Montgomery Road (45213).