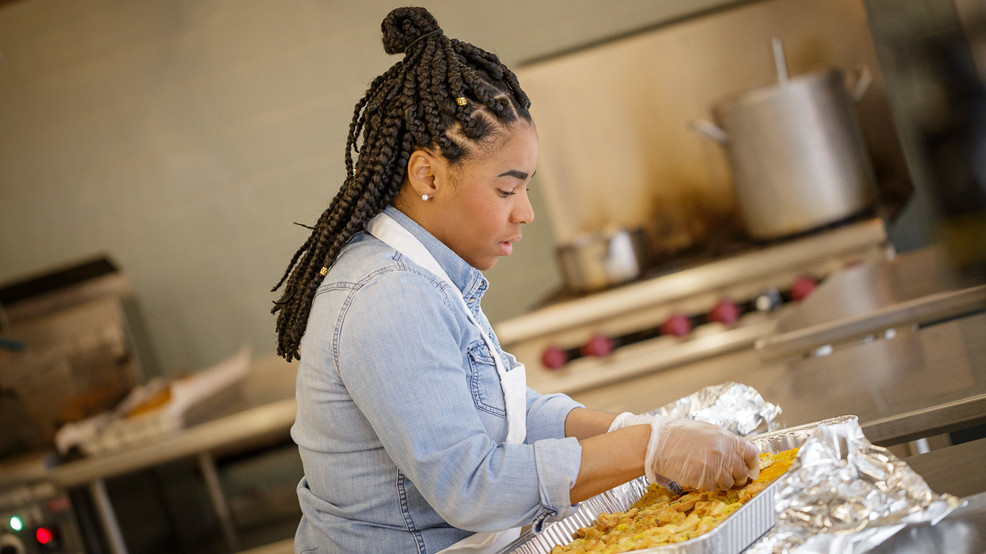 Owner Nickey Stevenson's upbringing inspired her to start a catering business because her grandmother, who cooked family dinner every Sunday when she was younger, instilled in her a life-long passion for cooking.

Nickey grew up in North Carolina, about 45 minutes north of Charlotte. There, she learned how to cook family recipes that were passed down for generations. Beginning at age 16, she worked two jobs in the foodservice industry to, in her words, "get what I wanted out of life."

In 2014, she found herself alone soon thereafter in a state she didn't know well after moving to Cincinnati. An avid journal-keeper, she regularly wrote out thoughts and feelings. During a particularly difficult time, she experienced the pain of a lost relationship and called upon her faith to show her purpose. That's when, she says, she realized she could combine her years of culinary expertise and customer service to form her own catering company.

After several years of working multiple jobs and working through the local MORTAR program, she began Southern Grace Cincy in 2017.

MORTAR, whose mission is to enable under-served entrepreneurs and businesses to succeed by creating opportunities to build communities through entrepreneurship, helped her get her business off the ground.

"It was a tremendous honor and a great experience working with them. I learned so much about entrepreneurship, the fundamentals of starting a business, and the basic knowledge of accounting and doing a canvas that will help take my business to where it needs to go for years to come," Nickey says. "They just opened up so many different opportunities for the entrepreneurs in that program."

Since 2017, Nickey has been the only full-time cook on staff. However, she employs several prep people who help her with events. She also focuses on employing returning citizens who need an opportunity to work after leaving prison, teaching them how to cook, and offering help with starting their own business should they want to follow a similar entrepreneurial path.

And she's doing it all out of an incubator kitchen in Over-the-Rhine. Southern Grace Cincy primarily operates out of Findlay Kitchen, which sits along Elm Street near Findlay Market. There, Nickey preps and cooks all of the food for which SGC is known.

"Our specialty right now is our mac and cheese. We make it with four different types of cheese," she says. Nickey enjoys experimenting with different meats and southern concepts while also adding her own flair to the menu. According to her, Southern Grace Cincy's Cajun chicken pasta is a favorite among hungry customers.

Though she cooks out of Findlay Kitchen right now, Nickey says she's looking into possibly purchasing a food truck in the future.

"We can set up at weddings if that's something people want to do, [...] and doing that will still give us that mobile option to go to different cities if we need to."

Adaptability is a strong suit for her. Since mid-March of 2020, Nickey has tweaked the way Southern Grace Cincy operates. Catered events are still happening, but she's now doing family and individual meals that can be picked up on certain days, which she advertises across her social media platforms. Customers who want food from Southern Grace Cincy can place an order via phone, on SouthernGraceCincy.com, or email Nickey directly. Orders are encouraged to be placed ahead of time.

When asked what advice she would give to others who are thinking about starting their own small business, she couldn't be clearer.

"Get started with an entrepreneurship incubator. ... Numbers are huge, and I think that's one thing people fail to take into consideration with a startup. I think the importance of understanding accounting and numbers is huge, so I would definitely suggest they get involved with an incubator."