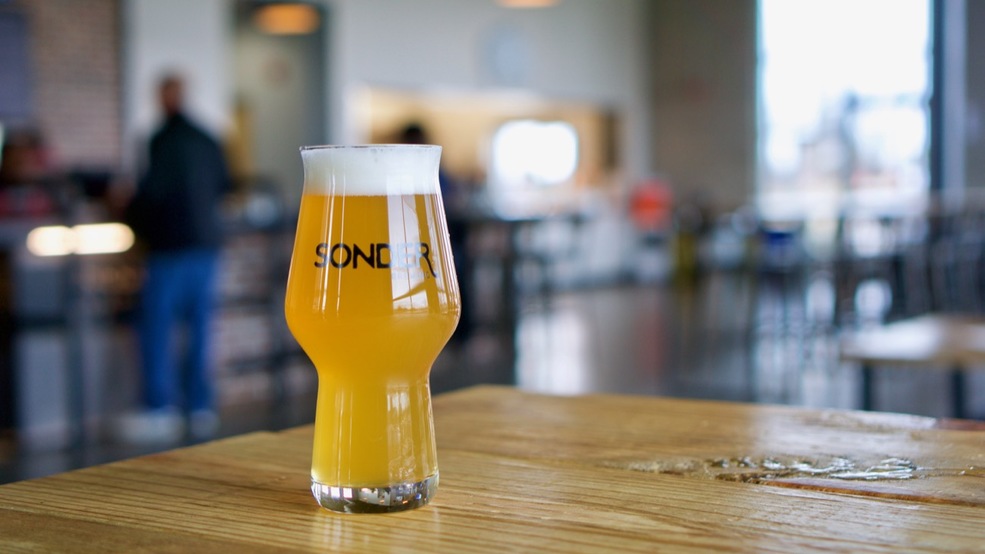 The Largest Brewery In Warren County Is Now Open

The word "sonder" is one of those quasi-legitimate words you'd find halfway between Urban Dictionary and Merriam-Webster. It refers to the realization that every person has a unique story, that everyone is living a life as vivid and complex as you.

Perfect choice for a brewery, right? It encapsulates everything convivial and spontaneous about craft breweries, including the sort of epiphanic insights only beer can draw out. Yeah, perfect—so perfect you find yourself wondering why no one had it coined before. But there it is, a perfect name shaped into a perfect logo adorning signs and glasses throughout Sonder Brewery's immaculate industrial confines.

In addition to the beer, those confines are why you’ll keep coming back to Sonder again and again. Part of it is the novelty. Sonder’s six-acre lot was vacant when the brewery’s founders purchased it two yeas ago. Since then, they’ve overseen the construction of a 15,200-sq.-ft. facility. The bubble wrap and packing peanuts were cleared away in October. Beneath them emerged a polished, impressive space tailor-made for brewing, distributing, and consuming large quantities of beer.

Consuming large quantities of Sonder beer, by the way, is not a difficult task. Several of the first varieties are good. A few—the Belgian wit and the tiramisu stout—are very good. And you imagine the offerings will only increase in quality from here, as the brewers get the sour program running and acclimate to Sonder’s sparkling new 30-barrel brewing system.

Not that Director of Brewing Operations, Chase Legler, needs time for acclimation. Having spent 13 years at New Glarus Brewing in Wisconsin, he’s an industry veteran and beer alchemist. Listening to him talk about his brews, you do lots of nodding, though your most frequent thought is, “Wait, what?” But that’s okay—you don’t need to understand the chemistry and composition of Sonder’s New England IPA, for example, to know it sits on your palette like a champ. Likewise, you don’t need to understand all of what Shropshire says to be giddy about the future of a brewery with him at the helm.

Should you need a sponge for all that beer, Sonder’s bartenders will direct you about eleven feet to your right, where BrewRiver Gastropub has carved out a restaurant area within the brewery. It’s quality bar food with NOLA influences, which puts it ahead of most breweries in the city.

The brewery’s activities extend beyond eating and drinking, too. The indoor high-tops and long, German-style beer tables are fine places to get a little work done midday. The outdoor entertainment area, meanwhile, will grow to include bocce ball courts, corn hole, volleyball, and fire pits. The idea is to create a brewery campus where folks in the area can commune, whether over a beer or not.

Then we come to distribution. Sonder is aiming high. More to the point, they’re aiming quickly. Just a month after its opening, the brewery is ready to can and keg its beer. It’s an expedited timeline, to say the least. It’s also precisely in step with the brewery’s ambitions.

All of which is to say, these folks aren't messing around. You can tell they had many long, honest conversations before the planning stages even began. You can tell they thought a lot about this very question: What does it take to succeed in a saturated market?

Well, if Sonder is answer, it says everything we need to know about craft beer in Cincinnati. You can't cut corners. You can't grow into success over time. It's “go big or go home."