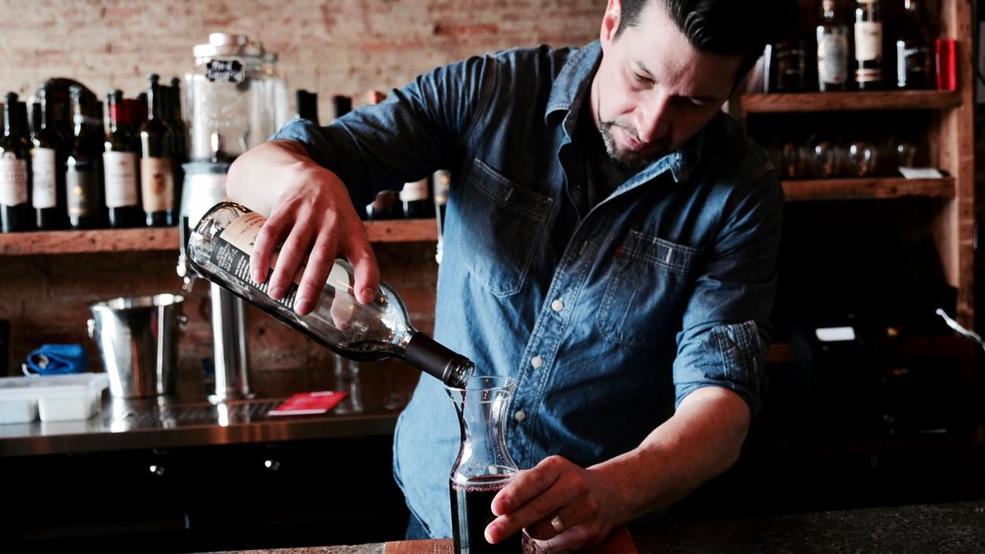 I Don't Even Like Wine, But I Love This New Urban Winery

Everyone has a little bit of black sheep in ‘em. Everyone wants to let their freak flag fly. Everyone wants to stand out in some way. Right? Even if it’s just 1% of who you are and the rest of that 99% is a rule follower who wants to fit in with the crowd, there is something inside of you itching to forge your own path.

If this notion resonates with you — and if you like wine — then I suggest you keep reading. Because we’re about to introduce you to Revel OTR, champions of both individuality and the grapes of the vine (a.k.a. wine).

An Urban Winery Is Born

Revel is an urban winery located in an 1885 building in Over-the-Rhine, Cincinnati. It opened in April 2017, but founders Anthony Maieron and John Coleman (who goes by JC), and their winemaking adventures, go further back. They are coming up on 13 years of making wine together, a tradition Maieron inherited from his Italian father. For years, they made the wine in Maieron’s basement. And that worked... for a while. But Anthony’s wife, Jodi, eventually forced him to look elsewhere. (She wanted her basement back.) More than that, they wanted to be able to sell their wine, which they didn't have the license to do in their "unofficial" capacity.

In the late summer of 2015, Maieron and JC purchased the building on 12th street, what would become the home base of operations for Revel. As much as they could, they repurposed materials from the structure. Wood was used to make the bar, tables, vanities, etc. A plaster relief image of a black sheep was masterfully created by Jeff Crowe on the first floor of the bar. The original freight elevator continues to be put to good use, as its necessary in the movement of produce and equipment, traveling from the basement to the rooftop. And speaking of the rooftop... Well, it’s not finished — yet. But it’s coming. (Maybe late summer?) Part of it will be covered, while the rest will allow you to fully soak up that fresh, fourth-floor air.

Alex Sena is the head vintner, the man in charge of taking whole grape clusters and turning ‘em into wine. The process goes a little something like this de-stem and crush grapes to be placed in one or half-ton fermenters. Add yeast and monitor for twice-daily “punch downs.” That’s when the grape skins are re-submerged and stirred to extract as much flavor and color as possible. Finally, once the fermentation is complete, the wine is pressed off of the skins before settling in oak barrels for the 12- to 18-month aging process.

Their first vintage in 2015 was three tons of grapes. In 2016, that bumped up to seven tons. This year, they plan to process 10 tons of grapes on-site.

The 2015 Sangiovese is their current wine. It has “aromas of cedar, spice, and vanilla,” according to Sena. “It is medium-bodied and opens with vibrant acidity. Plum and dark cherry notes, with a layered tannic structure, fill the mid-palate and leave a lengthy aftertaste of spice.”

Yeah, what he said.

But Here’s The Best Part

The best part is that they serve their wine in juice glasses. Anti-stemware people unite!

In the case of Revel, it’s not so much that they're anti-stemware (that’s all me), but it’s more so that they want to remove any pretension from the whole winemaking/wine drinking experience. And they’ve managed to do it.

Revel feels a lot more like a neighborhood bar, with an excellent choice in old school hip hop for music, btw, than some fancy-shmancy wine bar. And hey, if fancy-shmancy is your thing, that’s great. Good on ya. But if you’re more of a black sheep, or wannabe black sheep, then Revel is worth a try. At least, that’s my two cents.

Notes:
1. They serve more than their own wines. Revel features about 20-25 other wines.
2. They also have four beers on tap.
3. Oh yeah, there's food too. Check out the pics to see some of the light bite options.

And with that, we fully encourage you to scroll back to the top and peruse the photo gallery.