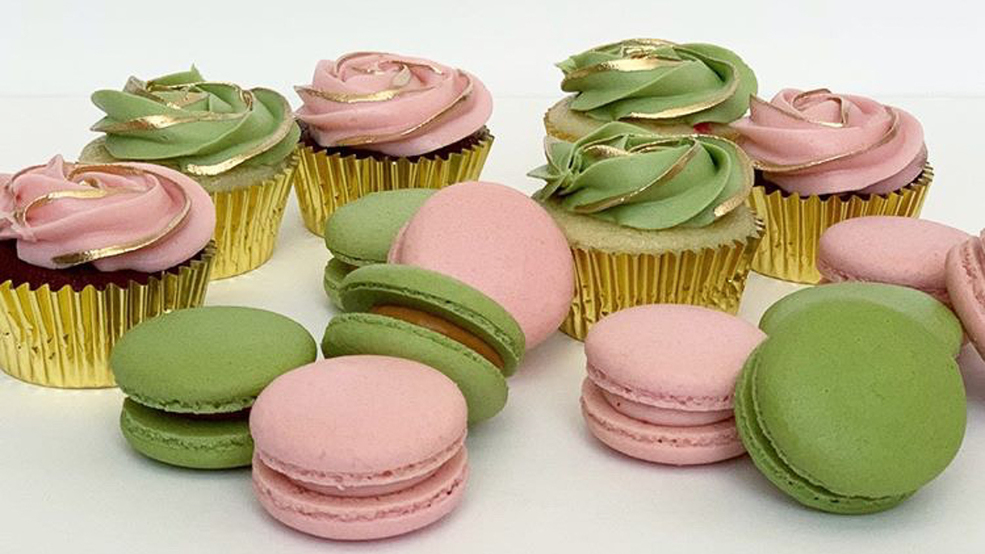 Rosanna Ruwe grew up in Merida, Venezuela watching her grandma bake whimsical treats with the resources available to her, like pouring Sprite into the batter and using Chiclets gum for bunny teeth in a cake.

Now, the mother of two owns Lulu’s Sweet Bites—a bakery that specializes in cakes, cookies, cupcakes, and macarons that’s operated out of her West Chester home.

She grew up baking in a cramped apartment kitchen shaped like a small alleyway, with cabinets and sinks on the right side and a fridge and working space on the left.

Ruwe says she probably made the kitchen a mess while she was baking; she has a bad habit of not cleaning up her workspace until the end.

“I don't remember getting in trouble with my mom. I must have cleaned up,” she laughed. “I bring everything out and I'm like a mad scientist.”

Though Ruwe's grandma never specifically taught her how to bake, she would watch her work in the kitchen and then practice the recipes on her own.

She remembers watching her grandma whip eggs by hand.

“She did everything by hand... I would just be hanging out at her house, just watching her do it and I thought it was so fascinating,” Ruwe says. “The way she did everything so effortlessly.”

With no measuring scale to portion out ingredients, Ruwe used a single cup with measurement ticks on it for everything.

“We were raised to be very independent,” she says. “I remember just doing this on my own in the kitchen, basically.”

After graduating from the University of the Andes in Venezuela, Ruwe wanted to improve her English. She decided to take English classes in the U.S. at the English Language Center at Brigham Young University in Provo, Utah, where she ended up meeting her husband. They got married in 2007.

A HOBBY BECOMES A CAREER

Ruwe and her husband moved to West Chester, Ohio in 2010 to be closer to her husband’s family. She never had much time for baking until she had her first daughter.

“I made these little monkey cupcakes for her birthday. I decorated them,” Ruwe says. “They were still from a box. I didn't have any good recipes at the time.”

As her two daughters Giovanna and Lucia grew older, Ruwe started to feel restless. She was deciding whether she should go back to school to study dietetics and nutrition.

Around the same time, Ruwe’s close friend asked if she could bake cupcakes for a neighbor and encouraged her to start selling the treats.

Ruwe made the only thing she knew how to bake from scratch: carrot cupcakes, which she packaged in boxes and ribbons that she bought from Michael’s. Soon after, she created a Facebook page in 2017 advertising her baked goods.

“I think it just takes one person to encourage and believe in you,” Ruwe says.

The community response was overwhelmingly positive, and orders quickly poured in. This forced her to learn quickly, turning existing recipes into cakes as well as creating her own.

When she first started her business, she had no experience decorating or stacking cakes. Though nowadays they’re her biggest passion and what she makes the most, cakes initially weren’t on her radar.

“That's why the business is called Lulu's Sweet Bites, because I was mostly focused on smaller bites like the cream puffs, cupcakes, and macarons—all this stuff that I like to do,” Ruwe says.

Her youngest daughter, the biggest sweet tooth in the family, is also the business namesake, with Lulu being short for Lucia. Ruwe didn’t care for using her own name, and her oldest, Giovanni, would pick a salad over sweets, so she felt they couldn’t name the business after her.

Ruwe doesn't take credit for running the business on her own; she works with three other women who help her make cookie dough, decorate and bake cookies/cakes, generate ideas for seasonal items, and more.

Ruwe says she empowers the women she works with by teaching them how to turn their skills into a profitable living. Ultimately, their goal is to offer unique and memorable treats.

“This past weekend we sat for two hours and we planned our holiday menu and we have really exciting things,” Ruwe says. “We want people to be able to purchase something from us that when they show up to a party, it's going to be very memorable and people will talk about it.”

Lulu’s most popular item is the cookie decorating kit, which include pre-baked cookies, icing, and sprinkles. She says moms love them because it’s hassle-free but still enjoyable for their kids.

In the future, Ruwe wants to open a storefront for Lulu’s. She saves every penny to prepare for that moment. Until then, she'll continue baking charming treats from her kitchen to your belly.