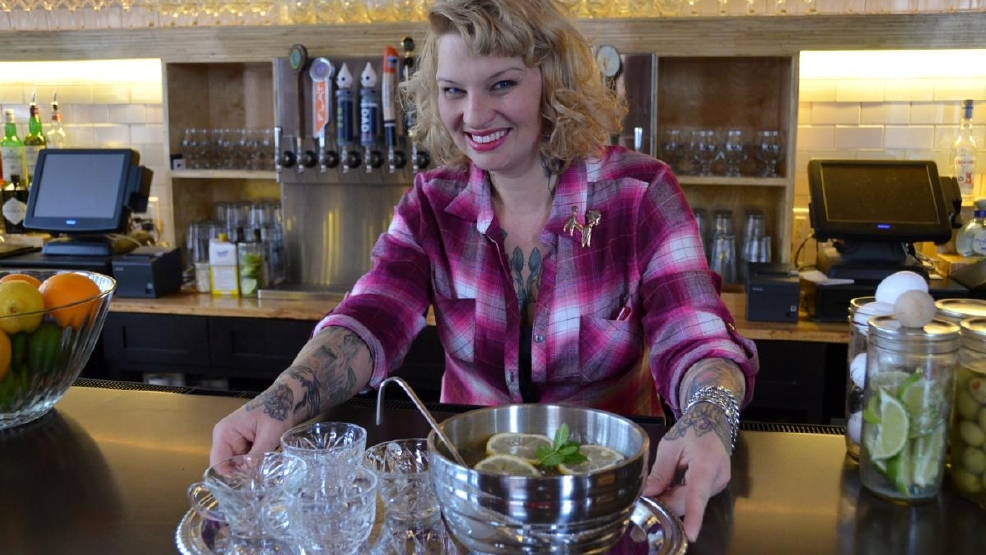 Hey Myrtle, Who Spiked The Punch?

I love OTR. It's great. It truly is, but sometimes it's nice to step away from the Rhine and venture elsewhere. Cincinnati is made up of 52 neighborhoods, after all.

Thank goodness for Molly Wellmann, a sixth-generation Cincinnatian, and the undisputed craft cocktail Queen of Cincy. Over Thanksgiving weekend, she opened up Myrtle's Punch House, which is located on Woodburn Ave. (at the intersection of Madison Rd.) in East Walnut Hills. This is merely the latest of her many ventures. (For those who don't know, she's also stamped her brand on Neon's, Japps, OKBB, and The Hearth Room).

The concept for Myrtle's is something you haven't seen before. Because, ya know, it's a punch house. We're not talking about the kind of punch that was spiked at your high school prom. We're talking about grade A, quality punch. "And why punch," you might ask?

So why not bring that back to a neighborhood that's flourishing? Exactly. "When we open bars, we don't just think about what kind of business we want. We think about what's good for the community," said Wellmann.

At Myrtle's, they have two fresh batches on draft everyday. One bowl costs $20 and is best split between two and four people. Or you can always get a single glass for $5. I tried the Fish House punch made from rum, cognac, peach brandy, lemon juice, and ice. It dates back to the 1700s and was the official punch for an angling club in Philadelphia. The club (known as The Schuylkill Fishing Company) has been around since 1732, and is considered to be the longest-running continuously operational social club in America. They used to serve this Fish House punch during their parties.

These days, wherever Wellmann is, the party is likely to follow. But as busy as she's been over the past four years, she still feels most at home behind the bar pouring drinks. "When I get to have a regular shift and be a bartender, that is what I truly love to do," Wellmann said. "I love the hustle, the bustle, even being in the weeds sometimes. I love talking to people -- seeing them at the end of their day and the beginning of their evening."

To Wellmann, that's been the most exciting part: tending the bar and becoming rooted in this community. Sure, everyone is raving about the punch, but the best moments are the ones when folks come in and thank her for opening up the place. A true neighborhood isn't complete without a local watering hole, a coffee shop, and a church. Welcome to DeSales Corner, folks. Ask for Molly. She'd like to pour you a bowl of punch.