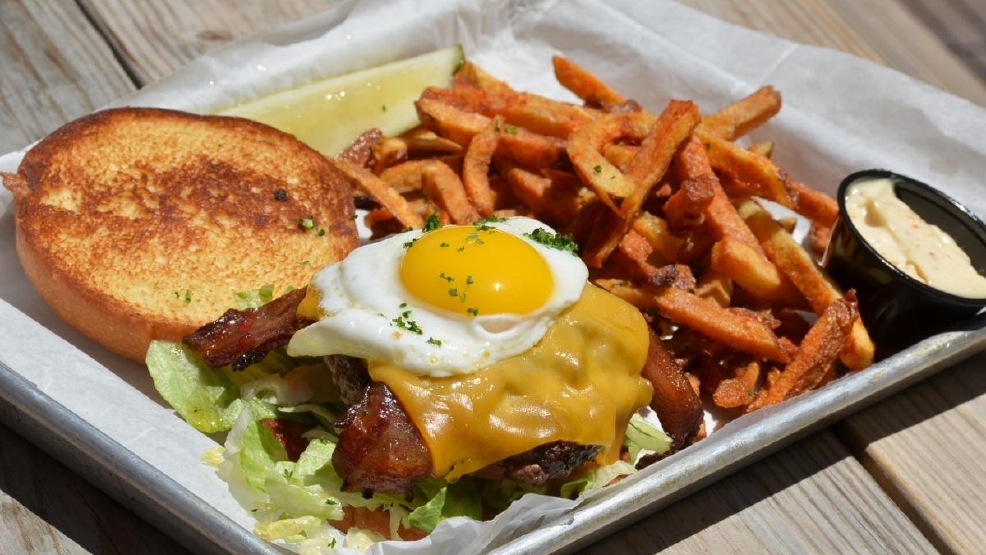 Hang Over Easy: Breakfast Cures All

It's Saturday. You've just woken up and the pieces from last night's epic pedal wagoning tour through downtown and OTR are starting to come together. A fireball at Rhinehaus. A MadTree Psychopathy at Neon's. A vodka soda with a lime at Righteous Room. A Pedal Pusher atop the 21c. A ___ at where was the last place we went?

You roll out of bed (literally, roll) because the thought of standing and balancing is just not possible at the moment. Then, you grab that bottle of aspirin and throw three down the hatch. Now you`re at least ready to face what awaits you on your phone. Did I text someone I shouldn`t have texted? Did I text someone I should have texted but text him/her the wrong thing? ... Wait, where is my phone?

Searching. Clothes getting tossed. Sigh of relief. Okay, I found it.

The nightmare of the past five minutes is beginning to calm itself, but there`s only one way to return your body to normal.

Hang Over Easy, where breakfast cures all.

The establishment is located at 13 W. Charlton Street in Corryville, super close to the Fifth Third Arena (and thus the college campus of UC). Founded by the Pedro family, the concept originally began as Nick's Diner in Columbus in 2002. After years of uninspired operations, they decided it was time to either close the doors or change. So change they did. In 2007, they reimagined the place as Hang Over Easy with a simple theme in mind: Breakfast Cures All. (Yeah, it really does.)

Last March they opened up their second location in Cincinnati. We popped by for the first time on a gorgeous Tuesday for lunch. (And no, we weren`t hungover upon arrival. ... I won't tell you how we left.)

The walk from your car to the front door will remind you of that childhood Sunday morning feeling -- the smell of mom making pancakes as it permeates throughout the house. You don't exactly walk downstairs and pull up a seat at the kitchen table. You`re led there by invisible strings attached to heaveny fingers and the sound of bells in the background. This place is like that. But better.

Part diner / part bar / part neighborhood joint, HOE doesn't really have a genre you can pinpoint. It's its own thing -- a beautiful thing. We parked it on the back patio, which is filled with picnic tables, regular tables, and plenty of lawn space. (Btw, the patio is dog friendly so that added 10 style points in our book.)

There is both a pressure and excitement to visiting a restaurant for the first time. The sensory overload of the unfamiliar environment combined with the stress of what to order can be overwhelming. Not at HOE. Not with the sun shining on your cheeks. Not with the crashing sounds of giant jenga blocks sputtering to the ground. Not with the knowledgeable and friendly staff.

We went with a Bloody Mary and sampled two beers -- Rhinegeist's Cougar and a Dechutes Black Butte Porter. The Bloody Mary comes in a glass mason jar with two olives sandwiched between a piece of celery and garnished with slices of lemon and lime. It's on-point. (And imagine me voicing that in a dudebro voice wearing a lax penny.)

For lunch, we went with the staples: the Dirty Sanchez, HOE Burger, and Garden of Eating Omelet. The Dirty Sanchez is the most popular item on the menu. According to the owners, its popularity is due to the yumminess factor. Pretty much. I'm not even huge into burritos, or chorizo, or sour cream, but somehow this Señor Dirty Sanchez is the perfect blend of food grime to keep your fork coming back for more. It's like your arm is on auto-pilot -- plate to mouth to plate. Press repeat.

And don't even get me started on that burger. Okay, get me started. There's a burger, but that's just the foundation. Add in some lettuce, tomato, cheddar, crisp bacon, red onion jam, bacon aioli, a sunny side egg, and serve it with bacon fat fries. I hope you pre-gamed with Lipitor. The kicker is really that sunny side egg, as the yellow yoke drizzles all over the burger touching each morsel with its gooey goodness. Hot damn. That's a burger.

Finally, the Garden of Eating Omelet. With this one, there`s no need to hyperbolize the food. It's a veggie omelet and serves its purpose as all veggie omelets should -- filling you up, getting you energized, and supplying your daily dose of that not-so-fun part of the food pyramid.

So, yeah, the food is fab. But that's not the only thing that makes this place worth your time and money. Truthfully, it comes down to the overall ambiance. The setting. The entrance to the restaurant isn't tiled with tile. It's pennies. Probably thousands of them that were hand pressed to the ground. The sides of the bar include old doors; the top is made of chalkboards. The huge barn-like doors leading out to the patio were originally used for the carriage ramp that now leads to a neat loftish area upstairs. The bathroom sink is automatic -- but not those stupid kind of automatic sinks that make you look like a fool. (Though I did kind of look like a fool for a second because I was confused. Then, I was impressed.). The bathroom doors are made from old school locker doors. Many of these materials were repurposed from the redeveloped Schiel School in Clifton.

To top it off, the window by the entrance is sealed with a Dirty Sanchez mustache that patrons often pose by. Present company included.