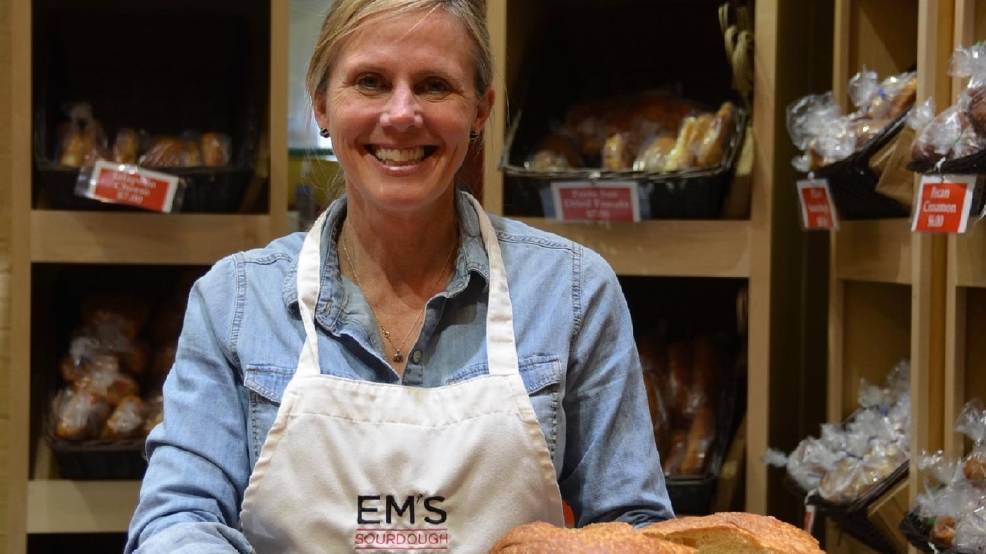 Melissa Engelhart opened her Em’s Sourdough Bread storefront at Findlay Market on May 4, 2016. (The secret ingredient to her life-changing bread? Her mom’s 24-year-old bread starter. ... But you didn't hear that from us.) / Image: Leah Zipperstein, Cincinnati Refined
SEE MORE

Em's Sourdough And The Fine Art Of Baking Bread

Bread means something. Bread is (and always has been) what brings us humans together. The act of "breaking bread" with individuals -- friends, family members, strangers, enemies, future partners -- is the start of something. It's a manifestation of something deeper, a symbol of communication and communion.

But honestly, as powerful as the whole "bread as symbol" story is, the reality is just as magical.

Bread-making is a multi-layered process, and it starts long before the butter knife ever touches the table. A baker's work is to combine ingredients, synthesizing elements into something more than the sum of its parts. And true bread makers knead an extra bit of care & spirit into the dough, ensuring that each bite, y'know... means something.

Engelhart was given a bread starter from her mom 24 years ago. And with that, the story of Em's Sourdough Bread began. In that period, she spent nearly eight years (on & off) operating a home-based company, selling to local markets and such. Then, on May 4, 2016, Engelhart finally realized her dream: opening up her very first retail shop.

Stepping into the former Bean Haus space at Findlay Market, the company is taking over one of the more active spaces in town. (& Just in case you can't picture it... It's diagonally across from Taste of Belgium, right in the epicenter of the market.)

This evolution has, of course, been a total team effort. Her husband came in on countless days, helping out after hours (often from 6pm straight through to midnight) to help build out the shop. Her kids have taken up the mantle as well, filling necessary roles from website creators to taste testers to cheerleaders.

And it all shows. 'Cause other than the bread being knock-your-socks-off good, Engelhart has a smile that could brighten the world. (Yes, I know this is about her bread. But ya just can't help but shine a light on good people when you meet 'em. ... She's one of the good ones.)

WHAT YOU NEED TO KNOW

The story behind the name:
The "E" is for Ethel, Melissa's mom. The "M" is for Melissa.

The types of bread:
Honestly, there are too many to name. Scroll through the gallery above to get a sample. (Or you could always hit up Em's website.)

The best thing to put on Em's Sourdough Bread:
Avocado on plain of wheat. Butter on cinnamon and apple. French toast with pecan. Marinara sauce on banana pepper cheese.
(Anybody else in heaven, right now? Thought so.)