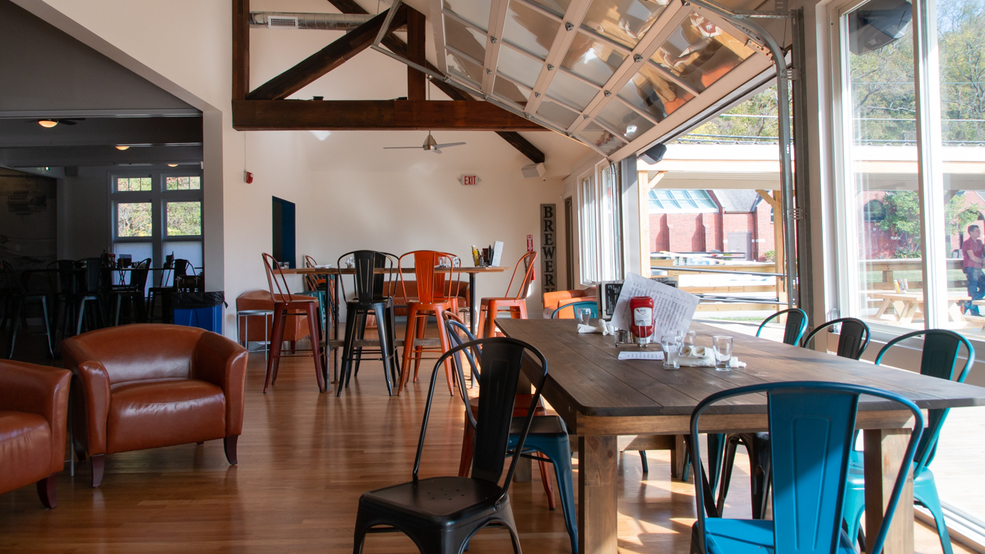 Their full-service restaurant makes everything from scratch, including appetizers and entrées that are available in individual or shareable sizes. The kitchen also offers multiple vegetarian and gluten-free appetizer and entrée options, as well. / Image: Elizabeth Lowry // Published: 11.5.19
SEE MORE

Navigate Your Way to the Newest Local Brewery on the River

"Dead Low" refers to the lowest depth at which a river is navigable, or the depth which is required for the boat to float. What that point is exactly varies from vessel to vessel, depending on how heavy the boat is and what it may be carrying underneath (like a paddlewheel, for example.)

These dead low points were often referred to in fathoms, with six feet equaling one fathom. A dead low of one fathom was referred to as a mark one. Twelve feet? A mark two, and so on.

So then at what “point” is Dead Low Brewing? Well, it's a few miles from downtown in a walkable community on the river, it's housed inside a multifunctional building that also includes a generous amount of indoor and outdoor green space, it's surrounded by ample parking, and it’s a stone's throw from other local entertainment and business centers.

FOUR YEARS IN THE MAKING

After years of pursuing serious home-brewing (at the same co-op as Big Ash Brewing) co-founders and friends Kyle Havens and Paul Ganim took their love of the craft and their desire to open a brewery to brand strategist (and Paul's sister) Christine Hall.

Four years later (including 18 months of building rehab and construction), Havens, Ganim, Hall, and crew opened Dead Low Brewing to the public in early October on Kellogg Avenue, right across the street from the California Deli and just down the road from Riverbend Music Center.

"When we were exploring which community to invest in, we had a specific set of characteristics we were looking for. We looked at multiple properties, but the Kellogg Avenue property and its large outdoor space easily fit the bill," Hall says.

Their smooth-finished beer tends to trend toward the malty end of the flavor spectrum, including stouts, lagers, IPAs, and light session brews and they’re all handled by brew master Greg Snow. The brewery also includes a full-scale kitchen that goes beyond typical bar fare.

Head Chef Scotty Berens manages and creates a full menu of dishes, all of which are made fresh and inhouse, with many recipes utilizing Dead Low beer and brewing ingredients.

"We intend to feed a lot of people, so the menu has a lot of options. Highlights include appetizers and shareable sizes, burgers, pizza, salads and vegetarian options, entrees, and a lot of delicious dishes in between," Hall says.

Dead Low's founders designed the brewery to serve more as a destination than a quick stop (though you can do that, too). Featuring a wraparound bar, plenty of low tables, bar tables, lounge areas, and outdoor picnic tables, you can feel free to grab a beer and some food and stay a while.

"We provide a fresh option to enjoy music and entertainment, host a business meeting, throw a private event, or simply stop in for a pint and a bite. And, at our core, we brew incredible beer and cook delicious food," Hall says.