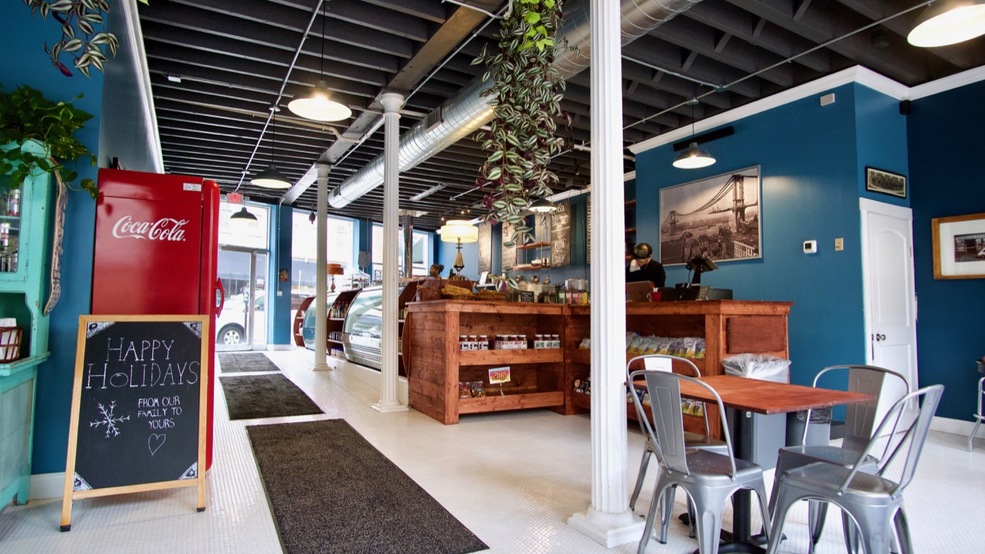 This traditional New York Style Italian deli opened in July of 2018 by the owners of Wunderbar. They hope to expand the eatery to serve beer and wine. There are also plans to grow the grocery aspect of the shop to include milk, butter, eggs, fruits, and local honey. It is open Tuesday through Sunday 11:30 AM-9 PM. ADDRESS: 39 West Pike Street (41011) / Image: Brian Planalp // Published: 11.19.18
SEE MORE

It’s a little surprising just how perfectly Peppe Cucina fits into the landscape of Covington. Without knowing any different, you’d think this New York-inspired deli were a neighborhood staple; a precursor to the development that’s grown up around it.

Not so. Peppe, which comes from the owners of nearby Wunderbar, has only been slinging sandwiches since July. Still, in the context of Covington's shiny new restaurants, bars, shops, and apartments, the deli remains perfectly suited to the needs of the Pike Street corridor where it resides.

It begins with Peppe’s layout. There are two entrances at either end of the narrow, tapered space—one accessing Pike Street, the other Seventh Street. Both entrances are outfitted with large windows that flood the deli with light, and each is conceivable as its front door. As such, the impression Peppe leaves—notwithstanding its ample seating—is as a pass-through, a grab-and-go.

As for what you’ll be grabbing, Peppe features an array of Sicilian favorites, New York-deli staples, and homemade baked goods.

Sandwiches: Peppe turns the sandwich into an artisan feat thanks to freshly baked bread and generous portions of cured meats and cheeses. Standouts include the muffaletta on ciabatta, the pastrami reuben on rye, the (vegetarian) herbivore on focaccia, and the Italian combo on Italian loaf.

Sicilian Pizza: Baked in an oven imported from Italy, Peppe’s Sicilian pizzas are delicious and authentic. They’re available by the slice, with rotating flavors like pepperoni, chicken parm, roasted tomato with ricotta and basil pesto, and fig jam with prosciutto and arugula.

Deli Et Cetera: Peppe's deli case is well-stocked. Inside it are broccoli salad, cold pasta salad, ravioli, meatballs, and more. Its daily soups are a good choice as well, especially as we head into winter. Past soups have included minestrone, ginger carrot, chicken noodle, tomato bisque, and cream of mushroom.

Cheesecake and Cannoli: The cheesecakes are homemade. They’ll remind you exactly why NY-style cheesecake is so iconic. The cannolis are not homemade. All the better, as they’re temperamental buggers, and Peppe is right to get them from Covington’s own cannoli master at Del Gardo’s.

There’s more in store, too. Peppe aims to serve beer and wine—by the bottle and the glass. The grocery side will also grow to include selections of meat, as well as milk, butter, eggs, fruits, and local honey.

That should round out Peppe as something of a Findlay Market in miniature, which is exactly what this expanding area of Covington needed.

There are, after all, plenty of new bars and sit-down restaurants along Pike Street and Madison Avenue, more every time you look. There are new apartments too, thanks largely to Phase I of Duveneck Square. What the area didn’t have was a deli with an artsy vibe where you could grab an upscale sandwich or a slice of pizza to go.