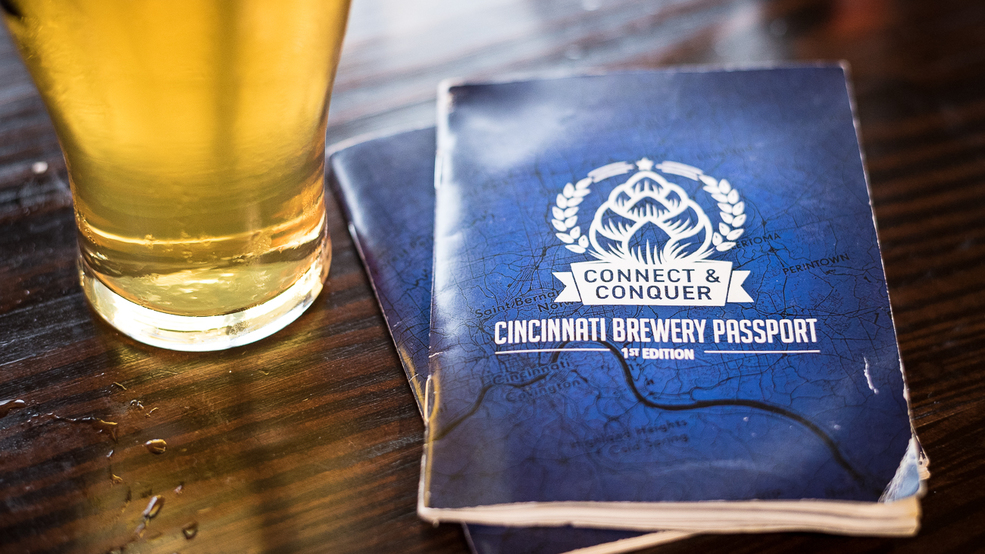 You can get the Cincinnati Brewery Passport for free at any of the 20 participating locations. / Image: Phil Armstrong, Cincinnati Refined // Published: 4.24.18
SEE MORE

Discover Your New Favorite Brewery With The Cincinnati Brewery Passport

Craft Connection Brewery Tours devised a clever way to encourage local beer lovers to discover breweries and taprooms they haven't visited before. It's called the Cincinnati Brewery Passport, a small booklet that lists 18 breweries and two distilleries for those seeking a challenge along with their adult beverage.

While not every brewery in Cincinnati is listed in the book, its message is clear: get out there and try something new. Every time you purchase a pint, flight, tasting, or merchandise at any of the locations listed in the booklet, you get a stamp that validates your visit. Once all stamps are acquired, completionists are rewarded with a limited edition, branded pint glass.

The passport is designed to intentionally steer you in multiple directions within the city (and beyond) so you have a better idea of what's available. Locations are spread out, making it nigh impossible to complete in one sitting.

Locals Dannielle Browne and Don Harper recently finished the Brewery Passport after casually working on completing it over the course of three months.

"It's an excuse to try new places," Dannielle explains, "and at the same time, it's competitive."

Dannielle, who prefers a sour or a gose, and Don, a Kolsch-man, were able to expand their scope of beer-drinking considerably thanks to the Passport. The two knew about half of the breweries listed in the booklet before working to complete it. Don sees that as an opportunity.

"There were places in there I'd never even heard of. I may have never found them [without the Passport]." He says.

The Passport lists the following 20 locations:

The two grouped their brewery visits together; they did all the Northern Kentucky locations in a single weekend, for example, and did Taft's Brewporium and Urban Artifact on the same day since they were close.

Though they got the Passport in their taproom of choice (Streetside Brewery in Columbia-Tusculum), they say their favorites of the new places they visited were Brink Brewing in North College Hill and Darkness Brewing in Bellevue. Braxton Brewing in Covington also made their list because, in Don's words, "there were dogs there."

As for the reward for completing the Passport, they're pleased with their commemorative pint glasses.

"A shirt is something you'll wear once," says Don. "The glass is nice because you can keep using it or display it on the shelf. You're proud of it."

The fun they had with this first edition of the booklet didn't come without a few notes they have for the next installment. They were surprised that beer giant MadTree Brewing in Oakley and several others weren't included in the booklet. The couple hopes to see new places, such as Little Miami Brewing in Milford and older breweries such as Municipal Brewing in Hamilton, added to the next edition.

Additionally, not being fans of bourbon or gin, they found the inclusion of the two distilleries out of place.

Upon gathering their last stamp, Dannielle recommends a final "Passport complete" stamp that finalizes the entire experience, as well as somewhere to see how many others finished it (presumably online) for the next edition.

Those minor criticisms aside, they enjoyed Nine Giant's free fry promotion included in the passport and would like to see similar promos for the next edition. Dannielle suggests, "For those without a food component, maybe a discount on a flight or something."

PICKING UP YOUR OWN

The two agree it was worth their time to explore other brewery options in the area. Trying new places opened their minds to more of what the city offered. In Dannielle's own words, "You never know when you'll run across a neighborhood, a beer, or a brewery you really love."

You can get the Craft Connection Brewery Passport for free at any of the participating locations listed above. If you plan to start your beer journey, Dannielle and Don have valuable tip for completing the Passport: keep it in your purse or car so you always have it.

Check out the Craft Connection Brewery Passport website, too.