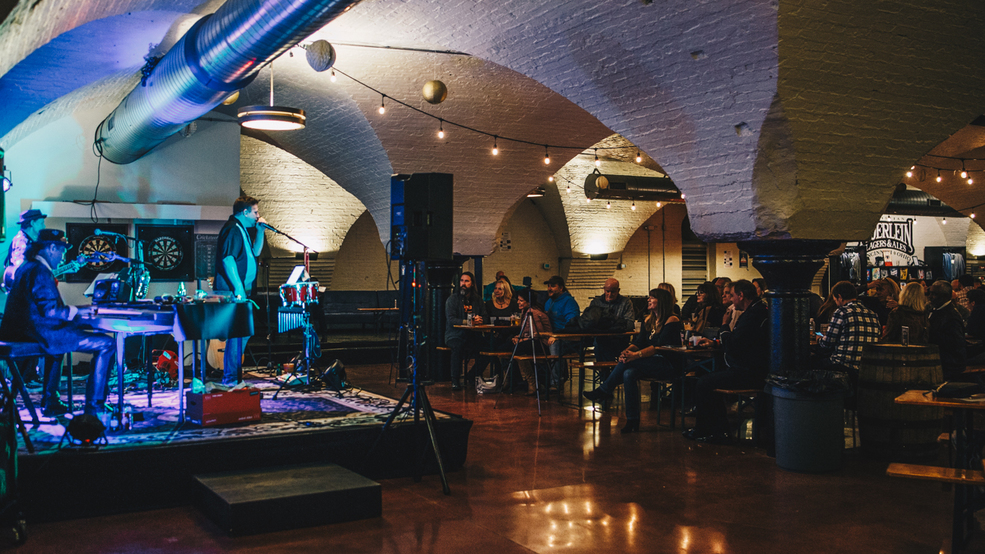 Christian Moerlein's Over-the-Rhine tap room will soon be home to a weekly beer hall singalong like those around Germany. The Christian Moerlein House Band will be playing rock and pop hits, requests from the audience, and a few German classics. You can join in the music and drink your fill of beer starting this Saturday, December 8, 2018. The singalong will run 8-11 p.m. ADDRESS: 1621 Moore Street (45202) / Image: Catherine Viox // Published: 12.3.18
SEE MORE

Prost! Moerlein Launches a New Tradition in Its Taproom

The Germans have a word—gemütlichkeit. It refers to a pleasant and cheerful coziness, specifically the Bavarian knack for savoring the moment.

The beer halls of Germany are awash in gemütlichkeit. People sit elbow-to-elbow at long wooden tables and dance holding enormous steins of beer. The din is full of greetings, clinks, and laughter. Above it, the band music is like a clarion call. Everyone joins in together singing the choruses and refrains, and at the end they enjoy their beers with gusto. That, in a raucous, fun-filled nutshell, is gemütlichkeit.

And soon, that'll be a regular Saturday night at Christian Moerlein Brewing Co.’s tap room. May we present the Christian Moerlein Beer Hall Singalong, your latest and best excuse to drink beer with friends and family in an authentic Over-the-Rhine beer hall.

The idea comes directly from the top, from Christian Moerlein’s enthusiastic owner, Greg Hardman. Hardman dreamed it up while reminiscing about a trip he took to Munich in 2017. Oktoberfest was in a fever pitch. The beer was cold, the dirndls and lederhosen were out in full force, and the music was everywhere.

To Hardman’s surprise, though, not all songs were in German. Instead he heard the likes of Sweet Caroline, Benny and the Jets, Back in Black, and Take Me Home, Country Roads. Peppered in were Ein Prosit and other tunes hailing from Germany’s folk and pop music tradition. But on balance the selection was international, eclectic, and familiar. Hence Hardman’s awareness that this grand Munich tradition might be replicated with success in Over-the-Rhine's historic brewery district.

Moerlein’s tap room seems like a perfect place to do it. The space is an authentic 1860s malt house with arched ceilings, exposed brick, and a bit of that gemütlichkeit magic waiting in the wings. It also has the benefit of already being a tentpole in Cincinnati’s brewing revival.

That’s not to say the tap room didn’t require some updates. You can’t very well have a Beer Hall Singalong without a stage or an excellent sound system. As of October, though, the tap room has both. Now Hardman is ready to jump stein-first into the most promising event series Over-the-Rhine has seen since the neighborhood’s 19th century heyday, when singalongs like this were commonplace.

The vision is indeed an ambitious one. To be clear, Hardman isn’t envisioning the Beer Hall Singalong as a one-time affair. This’ll be how Moerlein’s tap room is on Saturday nights from now on. Rain or shine, summer or winter, the space will be alive with the Christian Moerlein House Band. The beer will be flowing too, including new experimental brews every week. They also have wine, spirits and cider to choose from. And they’ll have those irresistible Bavarian pretzels for a sharable snack.

If that doesn’t get the gemütlichkeit rolling, nothing will. But having attended November’s preview event, we can safely attest to the coziness and the cheer—as well as the energy and the fun. It’s unlike anything in the city right now, and it’s your best bet for a good time come Saturdays in December and beyond.

HOW IT WORKS: The Christian Moerlein House Band will play audience-requested songs as well as a variety of popular song to serve every taste.