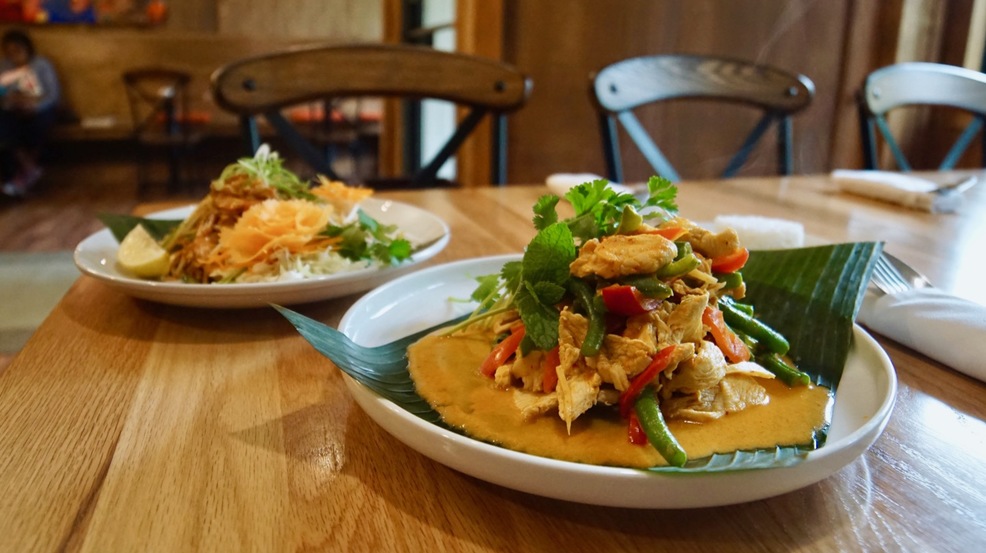 It&rsquo;s Quite Possible That The Best Thai Food In Cincy Can Be Found In Sayler Park

There’s nothing like the real thing to make you realize you’ve been settling for a facsimile all this time.

The case of Buddha Barn isn’t quite so drastic. Yes, it’s likely to be among the best Thai food you’ve ever eaten. And yes, it probably belongs on the list of can’t-miss food destinations around the city. But the pad Thai, for example, isn’t pad Thai reinvented. It just happens to have a depth of flavor that’s conspicuously absent elsewhere.

Let’s take a look at that pad Thai first. The shrimp is perfect, the tofu is dense rather than mealy, and the radish and shallot embellish the sweetness of the sauce (sesame oil, fish sauce, soy sauce, vinegar, brown sugar). Moreover the egg is cooked with the dish, meaning it tastes of that sauce too rather than, uh, just egg. And then there’s the peanuts, which (sorry) Thai everything together. Like I said, it’s not vastly different from what you’ve already had. It’s just more thoughtfully prepared.

The spring rolls are the same way. For one, they really make you appreciate just how many miles Thai cuisine gets out of cilantro. It’s used liberally here, alongside fried pork that’s deeply flavorful and cabbage whose earthiness you can actually taste.

Let’s mosey on down to the curries, shall we? Red curry, to be specific, with bamboo shoots, bell pepper, and basil. The basil is wilted and spicy. The chicken is imbued with the flavor of the sauce, which is rarer than you’d think. But the standout is the rice, whose stickiness is impeccable.

Still, the most popular dish on the menu, according to proprietor Jack Ma, is the garlic rice. Don’t worry, the flavor is of roasted garlic, meaning it has that smoky, spicy, herbaceous quality without all of the stench. Would I go in for a first kiss afterwards? Probably not. But it won’t knock your date over from across the table. And whatever the pains inflicted, whatever the romance forgone, it’s worth it. This stuff is dang good, and the balsamic chili sauce it comes with should be bottled yesterday.

I first heard about Buddha Barn from friends who live near Sayler Park. I honestly thought they were exaggerating how good it was. They weren’t. Buddha Barn is legit the best Thai food in Cincinnati. And whether you consider yourself a foodie or not, you should probably go.