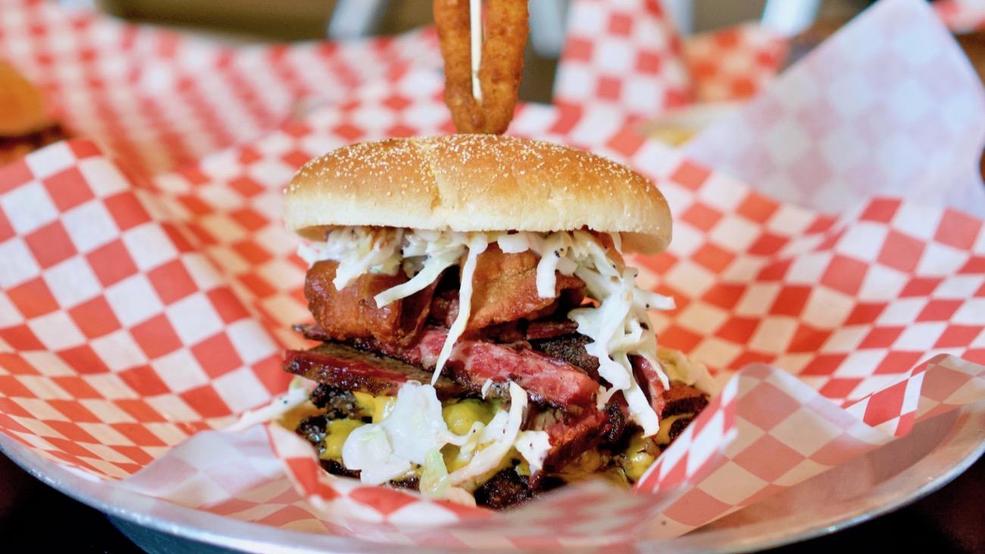 Why You Should Add Buck's BBQ to Your Restaurant Rotation ASAP

I have been reminded over the years, from natives and non-natives alike, that Cincinnati doesn’t have good barbecue. We’re a city of sauces, not a city of meats. We give it a good try, but we just can’t do it like the folks down south.

Is any of that true? I submit a rock-solid “maybe.” Wherever Cincinnati resides on the barbecue totem pole, we just moved up a peg. That's thanks to Dayton, Kentucky's Buck’s BBQ, whose meats and sides will have you thinking you’re in a BBQ metropolis like Kansas City, Austin, or Memphis.

We begin with the Buck’s Burger. Why? Because it features two smoked Angus patties, American cheese, smoked brisket, house-made BBQ sauce, coleslaw, and caramelized onions. Around 95 percent of this thing is meat, and it’s gob-smackingly, finger-lickingly good. Without fear of hyperbole, it might be the best burger in town.

For the quality and quantity of meat on this thing, we have South Africa to thank. There, Buck’s eponymous owner, Buck Buchanan, got his start in life and in cattle science. Suffice it to say, they eat a lot of meat in that part of the world. Just so, the Buck’s Burger doesn’t waste energy on things that muddy the palate—no tomato, for example, and a coleslaw that’s light on vinegar. It’s all about the smokiness and the texture of the meat; it’s about serving up something that’s straightforward in its aims and perfect in its execution.

That describes the rest of the menu as well. The brisket, which you can also get on a sandwich by itself or on a Philly-style sub with Brussels sprouts, is spot-on. It’s slow-smoked for 14 hours, resulting in a tender and succulent meat that erupts with smokiness. Same with the pulled pork, which is velvety in texture and wonderful in flavor.

You hear a lot about ribs that are “fall-off-the-bone” good. The ribs at Buck’s actually are that way. They’re also extra delicious with one (or several) of Buck’s homemade sauces. (Go spicy sauce with the aioli for maximum effect.)

Speaking of sauces, BBQ sauce can (and usually does) cover up all kinds of sins in the BBQ world. It can turn dry meat moist. It can turn dull meat flavorful. But the true test of good BBQ, whether we’re talking ribs, brisket, pulled pork, or even Angus patties, is how good they are without sauce.

Well, as good as Buck’s homemade sauces are, you don’t necessarily need a drop. Everything that comes out of the kitchen is fantastic unadorned. And if you should use a sauce or two, you'll find they embellish the meat's intrinsic flavors without overpowering them.

The Brussels sprouts deserve a paragraph of their own. Sweet, smoky, and spicy—they’re great whether on the Philly-style subs or as a side dish by themselves.

Speaking of side dishes, they’re every bit as well executed as the mains. The baked beans, for example, are smoky and beefy. The smashed potato, meanwhile, is the stuff dreams are made of—as long as your dreams, like mine, are filled with things crispy and fried and smothered in cheese.

As for Buck's signature dessert, a forked bananas foster, it's worth saving room for. Chocolate, nuts, and bananas are caramelized on a hot pan then poured over vanilla ice cream.

It’s no wonder Buck’s BBQ is doing so well. Opening in January 2018, the Dayton, Kentucky location is Buchanan’s second. It was quickly followed by a third location in Terrace Park. There are firm plans for a fourth, too, but for now it remains top secret.

Considering Buck’s menu, though, I dearly hope it’s as close to my house as possible. After one meal there, you’ll probably be wishing the same.