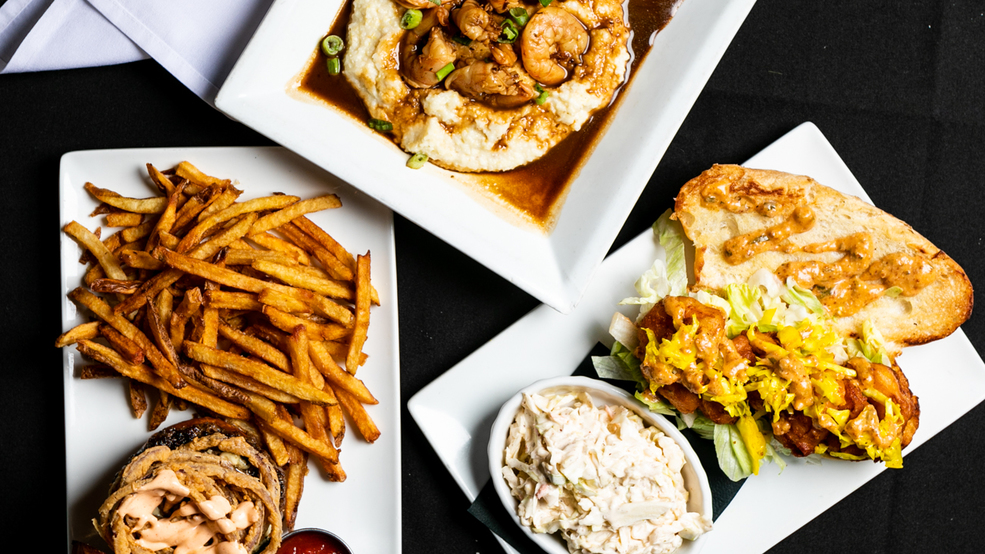 Brew River has been known for Creole cuisine since it opened, but now, in their new location, their focus is even more targeted toward creole and the craft beer they’re named for. ADDRESS: 4632 Eastern Avenue (45226) / Image: Amy Elisabeth Spasoff // Published: 5.19.19
SEE MORE

Brew River has been known for Creole cuisine since it opened, but now, in their new location, their focus is even more targeted toward creole and the craft beer they’re named for.

Brew River moved just up the street into the former Bella Luna space. The space just spoke to owner Joby Bowman. “I knew that it fit our branding more than where we had been before,” she says. “Once we made the decision, everything fell into place.”

The building, built in 1862, already had a New Orleans feel. It was also twice the former location’s size, and much more centrally located. As an added bonus, Joby could use her talents as an interior designer (which she refers to as her “second career"). Even better? There is a parking lot right next door.

Joby and her business partner and executive chef Michael Shields (who studied culinary at Cincinnati State and has worked as a chef for more than 25 years) came by their expertise in creole cuisine honestly. Michael worked for Emeril Lagasse at Nola in New Orleans, working his way up to sous chef and eventually opening the Atlanta location of Emeril’s. Joby worked front of house at Emeril’s. They fell in love with Creole cuisine. Hurricane Katrina kept them from opening a restaurant in New Orleans, however. They were on their way back from opening Atlanta when the hurricane hit. They pivoted and moved to Cincinnati. “Our goal is to be a restaurant that could actually be open in New Orleans, a spot to where both travelers and food-savvy locals of the city would visit!"

What is Creole, exactly? According to Joby, Creole is the food of New Orleans. “Cajun is an influence, but Cajun country is 4.5 hours southwest of the city. Cajun is fried, heavily spiced, and involves gator, crawfish, nutria, frog legs and more. [Creole] has Spanish, Italian, West African, French, Vietnamese, and Honduran cultures. It’s not just gator and fried oysters—it’s reflective of other cultures and more refined.”

Joby and Michael are also looking for a New Orleans experience. When Brew River first opened, their focus was really on beer. Joby says they were the first restaurant to serve all craft beer, and Brew River considers itself the first gastropub. Gradually, the restaurant began to feature Creole food more and more, in specials and in different Creole-focused menus. In their new location, they pay homage to their Creole and craft beer roots with their new name—Brew River Creole Kitchen: Tastes Like New Orleans, Craft Like Cincy.

They want to make sure you have a New Orleans-style experience, too. “We don’t serve fast food, and our from-scratch kitchen may take a few more minutes than other places," Joby says. The staff allows guests to take it slow, enjoy the company of their friends and loved ones, enjoy some music, and food and drinks without feeling rushed. “In New Orleans, everything moves slower, and we want people to feel like they are stepping into that culture when they are coming into BrewRiver.”

The restaurant features 16 all-craft draft handles, and they’re also a partner at Sonder Brewery in Mason. Many of their dishes feature beer, like “Beer-bq,” beer in the chocolate ganache on their brownie, and beer-naise and bacon-beer glazed cake doughnuts at brunch.

Speaking of food, their kitchen is 100% scratch, down to house-made ketchup. They’re introducing a new menu that focuses even more on Creole cuisine, featuring:

They are also bringing back their New Orleans Brunch on Saturdays and Sundays, from 10-2, featuring a Creole-inspired menu:

Don’t forget their famous Bloody Marys, Beermosas, and traditional New Orleans cocktails like Sazeracs, Hurricanes, and Kir Royales—and you can enjoy it while listening to live blues. In fact, there is music every day at Brew River, and twice on the weekends.

Brew River is located at 4632 Eastern Avenue, Cincinnati, Ohio 45226. For more information, or to make a reservation, head to their website or follow them on Facebook.