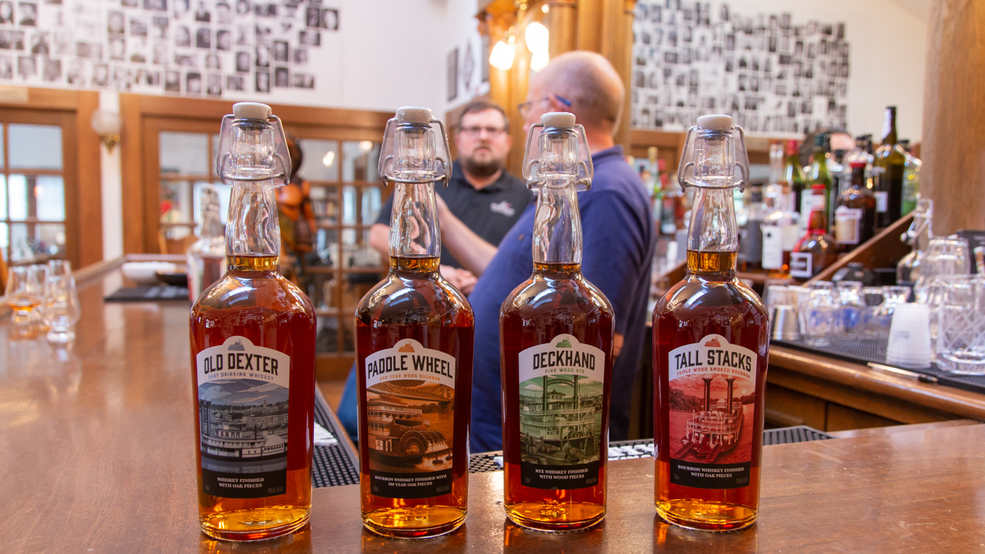 Brain Brew recently introduced their Riverboat Collection to celebrate Cincinnati's place in whiskey history. Old Dexter is a four-grain blend and is considered easy drinking. Paddlewheel is made from 200-year old barn wood that was cleaned up. Deckhand is a five-wood rye with a really intense flavor that’s great in cocktails. Tallstacks is made from a three-wood smoke. "This is the way whiskey used to be in Cincinnati" Hall says. "We need to reclaim this." / Image: Elizabeth Lowry // Published: 10.31.19
SEE MORE

A Newtown Distillery Crafts Whiskey You Customize Yourself

By now we all know how integral Cincinnati was to the beer-making industry pre-Prohibition. But did you also know that at the same time the city was also home to 80 whiskey makers? And, just like breweries around the Tri-state have recently restored our status as a brewery town, Brain Brew is aiming to bring back custom whiskey as well, but in an innovative new way.

Brain Brew CEO Doug Hall is no stranger to invention. As the founder of the Eureka! Ranch, he's helped discover, vet, and fast track ideas for companies all over the world for more than 40 years. But it was his team's partnership with Edrington distillery in Scotland that spurred him on to create a new way to make whiskey.

"I've worked in the industry for a long, long time and for 22 years I've worked with Edrington," Hall says. "They own a product called the Macallan, which is the most expensive whiskey in the world. I [asked them] 'How important is this wood thing when it comes to whiskey?' And they said '70 to 80 percent.'"

Armed with that knowledge, Hall went on to learn more about the whiskey business and specifically the wood-aging process. "The whole reason they are what they are is because of their sherry oak barrels. 70% of the flavor and 100% of the smoothness and color comes from the wood. The wood is the key," Hall says.

From there, Hall put his chemical engineering background to work, making the reaction of wood to whiskey better and faster.

While his first experiment with whiskey, wood, and a pressure cooker went about as well as you'd think, over the course of 1,000 total experiments he and his partners developed a process they now call Wood Craft™ finishing.

With this Wood Craft™ finishing, Hall and Joe Girgash, Bruce Forsee, and Dr. James Beupre of the University of Maine were able to exactly replicate the natural seasonal cycles that whiskey typically goes through in barrels aging in warehouses, but instead at his facility in Newtown and much, much more quickly.

And, apparently just as tasty, as Brain Brew has won several coveted national awards for their whiskeys.

While this finishing process can be revolutionary for established distilleries, it's also great news for everyone else. Starting on November 2, Brain Brew will host events at their headquarters and other locations around town at which you'll be able to craft your own custom whiskey.

"What people are going to do is they're going to go through with a whiskey thief [a Brain Brew tool invented to measure and mix whiskey] and take one ml of a favorite and then the next, and repeat, so you're going to craft your own whiskey," Hall says. "You'll use a tasting sheet to taste and rate your products throughout your whole experience. Then you'll sign the label and get your own bottle."

"Think of it like Build-a-Bear for adults," Hall says. "Our goal is to change the world of whiskey—make it creative, make it more fun."

Brain Brew is located at 3849 Edwards Road (45244). Currently, they're open for events on Saturdays, but check back as their hours will change in 2020.