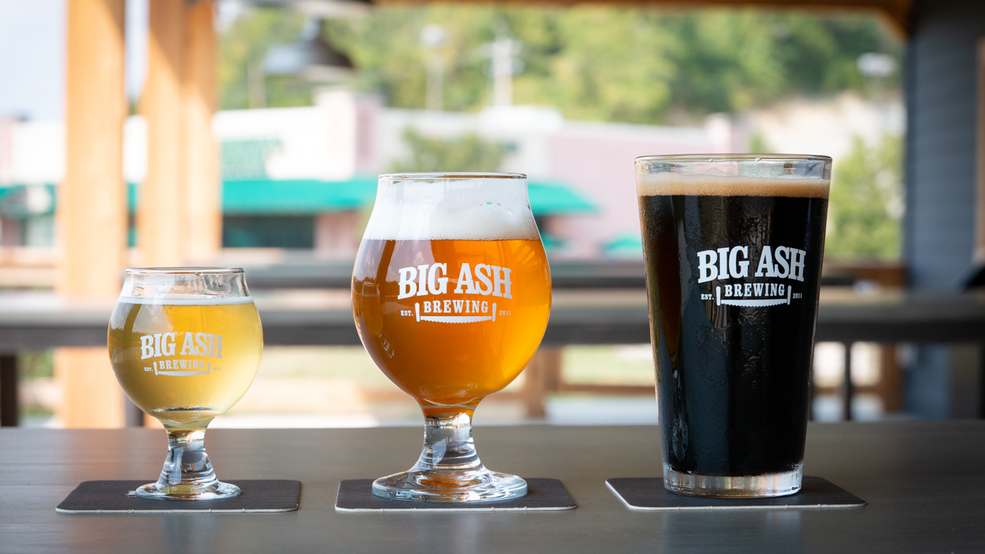 Big Ash Brewing wants beer enthusiasts to skip the waiting at the bar by pouring brews themselves. Their pour-your-own-beer-tap wall system offers 28 drink options including their own beer recipes, local beers, wine, and seltzers. A whiskey bar with craft spirits from local distilleries is also in the works. The Anderson Township brew pub is open from 4 to 10 PM on Monday through Thursday, noon to midnight on Friday, 11 AM to midnight on Saturday, and 12 to 10 PM on Sunday. ADDRESS: 5230 Beechmont Avenue (45230) / Image: Elizabeth A. Lowry // Published: 9.25.19
SEE MORE

For most, a hobby remains a hobby. For others, it turns into much, much more, as it did for Dave Emery and partners when they made the leap from home brews to a brewpub with Big Ash Brewing in Anderson Township.

The impetus for Big Ash Brewing bubbled up in the early 2000s when Emery and a few friends started making batches of beer in his kitchen for fun. By 2011, they moved the operation to his basement garage where Emery was joined by 25 other brewing enthusiasts, all of whom chipped in $200, bought a bunch of equipment and ingredients, and formed a "fraternal craft brew co-op."

In 2017, Emery and the guys started kicking around the idea of turning the co-op into a brick and mortar brewery but felt that for it to be successful, it had to solve a problem...or three.

"For one, taprooms are so popular, you can't get a beer. You have to stand and scream at the bartender and that's always frustrating. [Second] there's an incredible selection of beers and [you can't] try them all because asking for flights and samples can be annoying, especially during happy hour. And then, of course, there's all the classic business problems of efficiency, waste, and labor costs," Emery, managing partner, says.

To address those issues, Emery and his partners landed on the idea of a pour-your-own tap wall.

"It allows people to sample all the beers and get one immediately, and it's a great system in terms of controlling waste and efficiency," Emery says.

When you walk through the axe-handled doors, you'll be asked to carry your own tab as the cashier links your credit card to one of their beer cards, which then becomes your ticket to food and beverages.

From there, you can pour your own beer in the taproom. Simply check out the menu board, choose your beer you want to drink or sample, insert your card in the slot next to the selected tap, and pour yourself a pint.

Since you're paying by the ounce, you can sample as many beers as you like before choosing the one you want. Then, take a seat in the 187-person taproom or outside on the spacious, covered patio.

Don't feel like getting back up for another round? Hand your beer card to one of the beer meisters working there, who will gladly fill it up and bring it back to your table.

If you’re hungry, you can build your own custom pizza (from Zablong Peculiar Pizza) at ordering kiosks or from a tablet the beer meisters carry.

And if you aren’t drinking, you can pour yourself a soda if you prefer (designated drivers drink for free).

"The objective is not to eliminate customer service, it's to provide the best customer service," Emery says. "So if you want a beer, you can go get it. If you want to sit at your table and have someone get one for you, one of our beer meisters will go get you a beer. Or if you want them to order a pizza for you, they will do that, too."

At the end of the night, you can cash out at the door, or you can simply drop your beer card into a mailbox on the way out. The Big Ash staff will tally you out later and add on a 15% gratuity for your convenience.