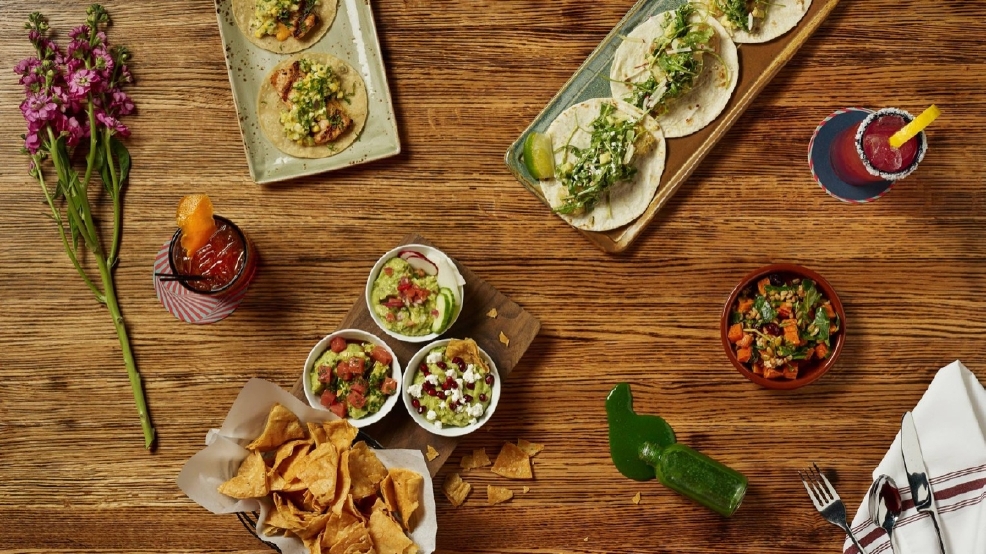 15 Amazing Taco Spots In (& Around) Cincy

Why? Simple. They're cheap, compact, delicious, and infinitely variable. More, they're an authentic cultural expression. So... basically they check all the hipster boxes. (You had me at "cheap," but "authentic" is the real zinger.)

The taco combines salty, sweet, savory, and (most importantly) high-fat ingredients with different textures, temperatures, and spices to create a flavor medley that is, in the sadly appropriated words of Guy Fiery, out of this world.

Well, you can scratch "cheap" off the list right now, 'cause these suckers aren't. What they are is melt-in-your-mouth delicious. But if you're like me, you probably never actually get to eat them, because by the time they hit the table you've already busted through two orders of Nada's chips and guac.

Did someone say "salsa bar?!" Yep. Speaking as someone who can't get enough salsa, this is a magical place. The menu is large enough that you'll have to go back a few times to really experience everything. And you'll want to. Because the margaritas are strong and the avocado salsa is uniquely delicious.

I was able to actually get a seat at Bakersfield (... about four months after I put my name in). The wait was worth it though, because the short rib tacos will forever change the way you think about tacos. The more crowded it is, the less elbowroom you'll have. But on the other hand, there's something about eating a taco in a packed restaurant that's pretty cool.

Sometimes people get too complicated with their tacos, and the product becomes muddled and unwieldy. Not so with Tacos Locos. The chicken tacos are just chicken, onion, cilantro, cucumber, and lime. So you can focus on the deliciousness.

No (attempt at) humor here, just a suggestion. Go to Gomez Salsa and get the tofu taco. It's teriyaki style with a citrus cilantro marinade, flash fried. Trust me on this one. (Oh, and Gomez is friggin' awesome for reasons that have absolutely nothing to do with their tofu. You pretty much can't go wrong with anything on the menu.)

Every trip to Newport should begin with La Mexicana, an unassuming Mexican restaurant and grocery whose tacos pack a punch. Especially the al pastor, which achieves that delicate balance of flavors we were talking about above (see: "out of this world").

The best tacos in Cincinnati -- for the price, at the very least -- might be hidden away on Madison Road in Oakley. (Not that this place isn't extremely popular.) Come for the tacos, stay for the pazole -- a Mexican stew that's outstanding. Plus, the interior is super fun.

Where do miserly college students go to get cheap tacos in a fast-casual setting? I'm guessing here, but my money's on Habanero, whose $2.50 Taco Tuesdays are the answer to life's biggest troubles. Like a late term paper.

Buried within Yard House's voluminous codex of a menu is the taco section. But why would you go there to get authentic Mexican street tacos? It seems a bit on the "anathema" side, but it isn't. Well, maybe it is, but the tacos are delicious. (Okay, we've taken a lot of twists and turns in a short amount of time here. Just get their Vampire Taco and everything will be fine.)

Our fierce co-editor Clay took a peak at El Camino when it opened and found it delicious. Four months later, he assures me the verdict has stayed the same. The PB&J (pork belly with cilantro aioli) is everything a taco should be. (The Cubano ain't half bad either, but I digress.)

This is a work-lunch place if I've ever seen one. Almost makes you jealous of all the office workers up there, 'cause they've got these delicious fish tacos right down the road. Almost.

Sometimes it's the little things. Great corn tortillas. Spicy hot sauce. Strong margaritas. Fresh chips. Put them together and you've got a bit of lightning in a bottle. The Taqueria Mercado experience is as high-quality as you'll find in the region. Plus, you're downtown, which is always a bonus.

This is one of the only true street vendors on this list. Would you mistake it for a taco stand in Mexico City? No, but when you're walking through Findlay Market, it's exactly what you want. Great variety of sauces and salsas, which you should pile on your tilapia or steak taco.

Some people were slightly irked when the management of Django changed a few months back, but the food has remained very good. The shrimp tacos in particular are fabulous. Well worth a trip to Northside.

Do you know a small, hidden-away place that does tacos better than anyone on this list? Sweet!
Hit us up on Facebook and let us know.