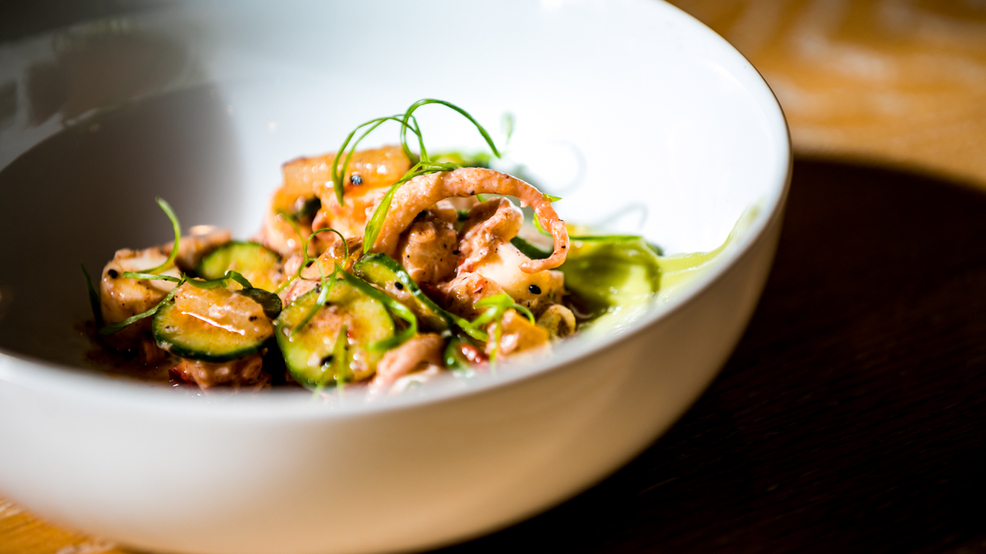 Cincinnati may be in the Midwest, but it feels almost coastal when dining at 8th & English. We've been there before, but the tides have changed at the O'Bryonville restaurant since it opened in March of 2017.

Owner Chase Blowers (former chef de cuisine at Boca, Dutch's, and others) and new head chef Pedro Rangel have been refining the 8&E menu for several months since Rangel came on in July. The two have been friends for over a decade and finally chose to work together in a professional capacity—much to the benefit of the rest of us. Chicago-raised and a veteran chef in several major cities across the US, Rangel's cooking expertise and Blowers' restaurant savvy combine to create a wave of strategic culinary creativity aimed squarely at Cincinnatians with an appreciation for elevated dining.

After three revisions throughout the last couple of months, the two created a new menu that emphasizes small plates along with their traditional, entree-sized offerings. What's more, the menu boasts an impressive list of non-repeating ingredients that other upscale restaurants simply don't have.

Don't worry, though—the halibut (8&E's top-seller) and other popular mainstays remain anchored to the menu. Blowers appreciates the regulars and isn't letting the ship sail on what they love. The addition of small plates, however, brings exciting new flavors to the table, taking 8&E into formerly uncharted waters.

"That balance let’s you do something kind of crazy. Don’t get freaked out about that because we got this,” Blowers explains.

The menu provides options. If guests want to share small plates, they can. If they want a traditional entrée, it's there for them. The new menu is all about flexibility.

Additionally, Blowers wanted 8&E's raw bar to sit front and center when guests walk in as sort of a first impression. The bar offers a variety of food including oysters, crabs, octopus salad, and Argentinian prawns. The centralized location, according to him, allows "someone to walk in the door and know what they are here for.”

But don't be fooled. While 8&E emphasizes its expertise in seafood, those without a taste for fish can still catch a tasty bite that wasn't culled from the ocean. The grilled mortadella is a perfect example of this. Rangel's upbringing in the Windy City and his love of loaded, Chicago-style hot dogs inspired the Italian sausage-based recipe; the mortadella comes smothered in baked beans and pickled mustard with basil. It's the chef's favorite dish on the menu, in fact.

Though, much like the ocean itself, 8&E's seafood offerings remain fluid. Blowers and Rangel are continuing to find the sweet spot, always refining and trying new things to see what people prefer. This progressive approach is encouraged thanks to Blowers' open-mindedness and Rangel's creative inclinations. That's one of the reasons Rangel enjoys working in the 8&E kitchen.

“Really the whole thing about working with Chase is it allows me to be a chef, and in that aspect, you can’t ask for a better situation to work in,” he says.

Though it took several iterations, the team has seemingly found a good balance when it comes to their current menu. When asked if it'll stick around, Blowers put it bluntly.